The beeches ( Fagus ) are the only genus of the subfamily of the Fagoideae within the beech family (Fagaceae). The eleven species are widely distributed in the temperate areas of the northern hemisphere in North America and Eurasia . 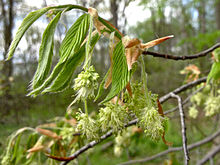 Beech species are deciduous trees that reach heights of up to 40 meters. Its bark is gray and smooth and rarely shows a small amount of bark formation in old age , which is why it belongs to the periderm tree . The twigs, which are thin and bent back and forth, have brown bark. The 1 to 3 centimeter long buds are long, spindle-shaped, often spreading, brown in color, covered with numerous bud scales and covered with silver hair.

The leaves are alternate, screwy on upright branches, on protruding branches they are more or less arranged in two rows. The leaves are divided into a petiole and a leaf blade. The leaf blade is shiny green, with entire margins, slightly dentate, wavy, or finely serrated. The stipules are narrow and deciduous.

Beech species are single sexed ( monoecious ). The flowers are on young twigs and appear at the same time as the leaves. The male flowers are in dense, long-stalked, drooping clusters. The male single flower has a four- to seven-column inflorescence and eight to sixteen stamens . The pollen are more or less spherical, about 20 to 45 micrometers in size, and show three pore folds running from pole to pole. The female flowers stand in twos or threes in upright inflorescences , they form a dichasium . The female floret has a hairy, four- to six-column flowers sheath and a dreikammerigen ovary on the three scars sitting.

When fruits are triangular, 1 to 1.5 cm long, shiny chestnut nut fruit , the beechnuts formed. They sit in pairs, rarely in groups of three, in a heavily woody, externally soft- pricked , four- lobed fruit cup (cupula). The beechnuts ripen in autumn.

The genus Fagus is distributed with eight to eleven species in the northern temperate zone of Europe, North America and Asia. One species extends to Mexico. The greatest biodiversity is found in eastern Asia. The beech species prefer a mild winter and cool, humid oceanic climate in summer . Areas with severe winter and late frosts and severe drought are avoided. In their southern distribution areas, the beeches are limited to the mountainous areas.

The first description of the generic name Fagus took place in 1753 in Species Plantarum , 2, pp 997-998. Type species is Fagus sylvatica L. A synonym of Fagus L. is Phegos St.-Lag.

The genus Fagus is widely divided into two subgenus, with the subgenus Engleriana being limited to East Asia.

About eleven recent beech species ( Fagus ) are distinguished, with the status of some clans being disputed, so that the number of recognized species can differ depending on the author:

The genus of hornbeams or hornbeams ( Carpinus ) is similar to the beeches at first glance, but belongs to the birch family (Betulaceae).

The hop beech genus ( Ostrya ), which is similar to the hornbeam, also belongs to the birch family (Betulaceae).

The genus of the beeches ( Nothofagus ), which also resembles the beeches in appearance, is native to the southern hemisphere and belongs to the family of the beech plants (Nothofagaceae).

While some species such as curb beech or Japanese beech play a subordinate role in forestry , the common beech native to Central Europe is an important supplier of wood. The Buchholz is in Germany with a strike from a year about 7 million cubic meters (about 1/6 of the total felling in Germany) one of the most important hardwoods as commercial and industrial wood . Beech wood is also a first-class firewood because it burns long, brightly, hot and quietly; therefore it is more expensive than most other firewoods.

Some varieties are used as ornamental trees in parks, avenues and gardens . In Japan the curb beech is grown as a bonsai .

By making estimates using the molecular clock method , the origin of the beeches can be traced back to the Chalk , presumably to the Campanian . Early fossil finds come from the Danium of Greenland, a subunit of the Paleocene . Together with Miocene finds from the island of Iceland, they show a far northern distribution in the Tertiary, far beyond today's northern distribution limit, where immigration from North America is assumed. The oldest division into the subgenus Fagus and the purely East Asian Engleriana , probably in the early Eocene around 53 million years ago, suggest that the recent lineage originated in the North Pacific region, either from North America or from East Asia. Fossil preserved are, in addition to the characteristic pollen, also foliage leaves and fruits as well as fruit cups, so already with the oldest directly fossil proven species, Fagus langevinii Manchester & Dillhoff from the early Eocene of British Columbia (Canada). A widespread species, Fagus castaneifolia Unger, is the only species found in western Eurasia until the Middle Miocene. In the Oligocene , beeches were already widespread in the lowlands in Germany and were one of the dominant forest tree species.