The beeches ( Nothofagus ), very often called southern beeches , are the only genus of the beech family (Nothofagaceae) within the beech-like order (Fagales). They are native to the southern hemisphere . 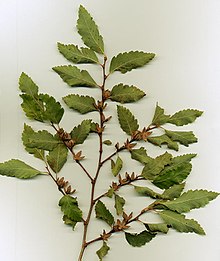 The alternate and mostly spiral, sometimes two-line arranged leaves on the branch are divided into petiole and leaf blade. The leaf blades are simple. The leaf margins are seldom smooth, mostly serrated, notched or serrated. Stipules are present.

Male flowers usually consist of six scale-like, overgrown bracts and six to 15 fertile stamens (sometimes more, but some authors also refer to such organs in the Nothofagus with many stamens as pseudanthia , so there are actually several flowers). In the female flowers, their bracts are in a circle and two to three carpels are fused together to form a two- or three- chamber ovary. Each ovary compartment contains two ovules. There are as many styles as carpels. Pollination takes place via the wind ( anemophilia ).

The fruits are small nuts . Two to seven fruits stand together and are surrounded by a fruit shell, a scaly or prickly one ( cupula ). Contrary to previous assumptions, the cupula has not proven to be homologous to that of the beech family . This means that the main argument for belonging to the beech family of the pseudo beeches does not apply, although the more distant relationship to these remains within the beech-like family.

The pollen of the pseudo-beeches differ significantly from those of the other beech-like beeches . They are radially symmetrical, approximately oblate and isopolar and have four to ten germ openings ( apertures ). There are eight types of pollen:

The fossil pollen is called Nothofagidites .

The genus Nothofagus and thus the family has a disjoint area : it is represented in southern South America , Australia , New Zealand , New Guinea and New Caledonia . This distribution is typical of taxa that had already developed when the great continent Gondwana still existed. After drifting apart of the land masses the areas of species are now far apart. Since the species of this genus occur exclusively in the southern hemisphere, they are most often referred to as southern beeches.

The distribution area ranges from the equator to 54 south latitude , from sea level to the sub-alpine tree line . The locations are found in tropical and temperate rainforests .

False beech fossils are known from southern South America , Antarctica , Australia , New Guinea and the neighboring islands, New Zealand and Tasmania , but not from Africa and India . The origin of Nothofagus was certainly in the southern high latitudes, followed by radiation to the other southern hemisphere regions during the Late Cretaceous and Tertiary . Due to the complete absence of Nothofagus in Africa and India, radiation can only have started after these continents separated from the unified Gondwana land mass.

Nothofagus pollen occurs for the first time in the early Campaniums of southern South America and the Antarctic Peninsula . This is the first ever appearance of the genus. Since the late Campanian or early Maastrichtian are pollen from all four recent subgenera of West Antarctica known and South America. From there they can reach Australia , Tasmania and New Zealand . New Guinea is only Brassospora known (since the Middle Eocene ) and only in the Pleistocene reached Brassospora the only subgenus Caledonia.

This spatial and temporal distribution pattern suggests an origin of Nothofagus in the biogeographical " Weddell Province ". The greatest diversity and maximum distribution of Nothofagus has been demonstrated for the late Oligocene and early Miocene . Since then, apart from New Guinea and New Caledonia, there has been a decline in distribution and diversity, as well as an extinction of Brassospora in all other regions. This is certainly a consequence of the climatic changes in the southern hemisphere since the Eocene- Oligocene border.

The genus Nothofagus was previously assigned to the beech family (Fagaceae). Regardless of this assignment, they belong to the order of the beech-like (Fagales). The botanical name is derived from the Greek word nothos for false, spurious, hence the German translation of Nothofagus = false beech, because they are trees that are very similar to beeches and also have a certain relationship with them.

There are around 35 species of Nothofagus . The genus is divided into the following four subgenera Brassospora , Fuscospora , Lophozonia and Nothofagus :

Subgenus Brassospora Philipson & MNPhilipson
The type species is Nothofagus brassii , the pollen type brassii a. This subgenus with 19 species is only found in New Caledonia and New Guinea . All species are evergreen.

Subgenus Nothofagus
The type is Nothofagus antarctica , the pollen type is fusca b. This subgenus with five species is only found in South America .

Here is the list of all species of the genus Nothofagus with subgenus affiliation: 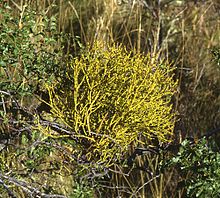 A specific symbiosis is particularly interesting: fungi of the genus Cyttaria (there are around twelve species) always live together with Nothofagus species. The genera Cyttaria and Nothofagus have the same disjoint distribution that reflects the great continent Gondwana . Both genera are found in the Australian-New Zealand area and in southern South America.

Heterobathmiidae , a family of butterflies around 125 million years old and part of a group that is a sister group to all other butterflies Lepidoptera , has a very close association only with Nothofagus species. The adult animals eat the pollen and the caterpillars only Nothofagus leaves.

The leaf beetle Novocastria nothofagi (English-speaking name "Gul beetle") only attacks false beeches. The larvae go through several molting stages and then pupate in the form of white, crystal-hard spheres. The copper-colored leaf beetle hatches after two to three weeks. This species was discovered by Margaret D. Lowman in Australia in 1979 and named by Brian Selman of the University of Newcastle-upon-Tyne.

The three most common species planted in parks and gardens are deciduous; the evergreen species are not sufficiently hardy in Central Europe .

The wood of several types is used, some of which are of good quality.

Some parts of Nothofagus pumilio's plants are processed into food.