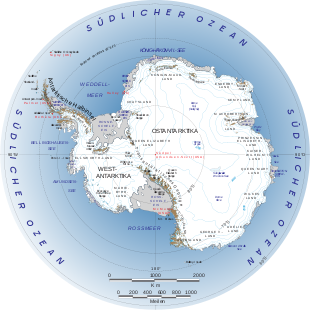 While East Antarctica , larger than Australia, is truly continental in size, the other part of Antarctica, West Antarctica, is more of a subcontinent or a huge peninsula .

West Antarctica is separated from East Antarctica by the Transantarctic Mountains . It consists of Marie-Byrd-Land and Ellsworthland . Then it extends further north, in the form of an approximately 2000 km long land mass, the Antarctic Peninsula . After Bransfieldstrasse , the offshore South Shetland Islands follow to Drakestrasse . The geological continuation of the peninsula eastward in the South Orkney Islands , South Sandwich Islands and other archipelagos that encircle the Scotia Sea to the west lies beyond the continental shelf and is no longer included in the Antarctic continent.

The two sea areas between West and East Antarctica are the Weddell Sea on the Atlantic and the Ross Sea on the Pacific side. Amundsensee and Bellingshausen-See stretch in between . The Drake Strait, the strait to South America , connects the Pacific and Atlantic Oceans.

Due to the geographic shape of West Antarctica, the climate there is more maritime . Due to the balancing effect of the sea, the temperatures are not as extremely low as on the rest of the mainland . On the Antarctic peninsula , temperatures can sometimes even rise to 0 to +3 ° C in summer, so that in some protected places the ice sometimes melts and the bare rock comes to light.

West Antarctica has a geologically different structure from the rest of the continent. Its mountain ranges reach almost 4,200 meters in Mount Jackson ; the highest point, however, is Mount Vinson of the Vinson massif with 4897 meters. In large parts of West Antarctica, the ice sheet either rests on the mainland, which is below sea level, or floats as an ice shelf , insofar as this is assigned to the area. If the West Antarctic ice melted, only a few islands and the transition area to East Antarctica would remain as land areas.

West Antarctica is primarily drained via ice flows such as the Rutford , Bindschadler , Möller and Whillans ice flows into the large ice shelves. The ice masses of the glaciers Pine Island Glacier, Thwaites Glacier, Haynes Glacier, Pope Glacier, Smith Glacier and Kohler Glacier flow into the Amundsen Sea. The Pine Island Glacier and the Thwaites Glacier in particular have been scientifically observed intensively in recent years, as their flow speed has increased significantly and the "grounding line" at which the sea water, ice and rock plinth meet is moving inland with increasing speed relocated. Because most of West Antarctica is actually a sea basin, the West Antarctic Ice Sheet is inherently unstable.