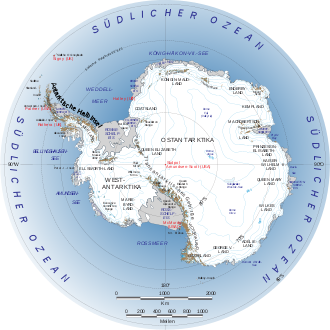 East Antarctica covers by far the largest part of the mainland in Antarctica with over 8 million km² . It is larger than Australia , making it truly continental in proportions, while the other part of Antarctica, West Antarctica , is more of a subcontinent or a huge peninsula .

Overall, East Antarctica has an even more hostile climate than the western part of the continent. The temperatures are even lower here and ice-free areas, such as those found here. B. on the coasts of the Antarctic Peninsula , practically do not exist here. In 2013, the Landsat 8 satellite measured temperatures of minus 93 degrees Celsius and below along a mountain ridge between the two plateaus Dome A and Dome F , making it the coldest place in the world. The pole of inaccessibility , the point of the continent furthest from the coast, high on the ice sheet, is also located in East Antarctica. Another significant difference to West Antarctica is that the Antarctic ice sheet rests mainly on the mainland, which rises above sea ​​level .

In contrast to the scientifically undisputed loss of ice in West Antarctica, East Antarctica does not yet give a clear picture. While a current study from January 2019 postulates an accelerated melting also for the East Antarctic regions, a publication by the European Geosciences Union comes to the result that the East Antarctic ice sheet is currently still relatively stable and does not show any significant loss of mass.

An international team of experts, consisting of around 80 Earth system and geoscientists, published the most extensive study to date on this topic in June 2018. According to this, the ice sheet in East Antarctica is actually growing, in contrast to the overall trend, as a long-term measurement from 1992 to 2017 showed (growth of 5 billion t per year). This effect, which seems to be directed against general global warming , is explained by the fact that the increased evaporation over the oceans leads to increased snowfall in East Antarctica. The mass loss of the West Antarctic ice sheet, at 7 billion t per year, clearly outweighs the mass gain in East Antarctica.

There are some important major regions in East Antarctica: