The historic prime meridian is marked on the floor and on the building of the Transit House in Greenwich.

A GPS receiver does not show exactly zero longitude over the prime meridian marked in Greenwich. 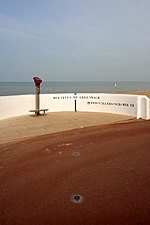 Northernmost point of the prime meridian on mainland Europe in Villers-sur-Mer , France

The prime meridian is that meridian (a semicircle perpendicular to the earth's equator and running from north to south pole ) from which the geographical longitude to east and west is counted.

Its determination is arbitrary. It was placed in the meridian plane of the London observatory Greenwich by international agreement during the International Meridian Conference in 1884 and is therefore often referred to as the Greenwich meridian (meridian of the passage instrument at the Royal Greenwich Observatory ). Until then, different zero meridians were in use.

By convention, the longitude from the prime meridian to the east (i.e. in the sense of the earth's rotation ) is counted as positive (0 ° to + 180 °) and negative to the west (0 ° to −180 °). But more common are eastern longitude (0–180 ° east, algebraically positive) and western longitude (0–180 ° west, algebraically negative). The abbreviations used are O or E for "east" and W for "west". The symbol E (English for "East", French "Est") is also used in some parts of German to avoid confusion with the number 0. In the western hemisphere (especially in the USA), contrary to the international norm, western counting of 0 ° –360 ° is also used.

The length of the prime meridian is half the circumference of the earth's international ellipsoid , measured over the poles , i.e. 20,003.9 km. With its opposite so-called antimeridian, which intersects Wrangel Island at 180 ° (without the addition of E or W), the prime meridian complements itself to form a great circle on Earth. The date line runs partly (near the poles and north of the equator) exactly at 180 ° Greenwich (deviations or exceptions from the 180th degree of longitude are: in the Bering Strait , near the Aleutian Islands (Alaska), in Kiribati , near the Fiji Islands , at Tuvalu , near Tonga and the Kermadec Islands and Chatham Islands belonging to New Zealand ).

Before the establishment of an international prime meridian in 1884, almost every European country had its own prime meridian, usually the geographical longitude of the respective capital or its observatory. With increasing international travel - especially by rail - it became necessary to standardize the existing systems. A large-scale traffic plan required a uniform time for smooth and safe operation according to the timetable instead of the previously sufficiently accurate solar time , which differed from city to city. In addition, it became more and more important to have accurate international time ( world time ) available. It is defined as the mean local time of the prime meridian.

At the International Meridian Conference in Washington, DC with representatives from 25 nations on October 13, 1884, the meridian running through Greenwich was introduced as the basis of the international coordinate system.

As a possible international prime meridian, five main options were discussed at the Washington Conference:

In the course of the conference it soon became apparent that the Paris Prime Meridian would not find a majority. The old Ferro-Meridian was regarded as a "French submarine" because it was fixed a few decades earlier at exactly 20 ° west of Paris. The Azores and the Bering Strait were ruled out mainly because they did not have an observatory and were not connected to the rest of the world by telegraph at that time.

So the Greenwich Meridian finally prevailed as the International Prime Meridian with a large majority - with France abstaining.

Corrected position of the prime meridian

Visitors to the Greenwich Observatory are often astonished that their GPS receiver does not show exactly zero at the zero meridian marked there. It runs about 102 meters east of the historic meridian through Greenwich Park. The cause of this difference is a measurement error caused by local gravity fields ( gravitational anomalies ) at the time of the agreement made in 1884, which led to the incorrect determination of the astronomical reference points. These still valid reference points and the center of the earth lie in a (meridian) plane that cuts the earth's surface a little further to the east.

Apart from that: The currently valid prime meridian of the WGS84 and ETRS89 / GRS80 reference system is no longer firmly tied to the earth's surface, but a modeled geodetic datum , since meridians are not surface-fixed due to tidal forces , polar movement and continental drift .

Course of the prime meridian

The Greenwich Prime Meridian crosses eight present-day states on land and has the following length in the individual countries:

The mean solar time at the prime meridian became decisive for universal time ( GMT , Greenwich Mean Time ), which was only replaced by coordinated universal time (UTC) in 1972 . Today, this is no longer based on local time, but - as it is called - coordinates continuous atomic time with astronomically measured Universal Time, which reflects the irregularities of the earth's rotation and the positions of the sun . The adjustment takes place via leap seconds . At the prime meridian, the difference between mean local time and UTC is not precisely zero today.

Historical concepts of the reference line of the earth measuring networks

Zero meridians of other celestial bodies