The East is the direction of the Earth's rotation running direction . It is one of the four cardinal points (north, east, south, west) and is historically associated with the sunrise .

Quotation in Latin ex oriente lux 'from the east (comes) the light'.

However, depending on the season , the point of rise of the sun deviates significantly from the east direction: At the equator up to 23 °, in Central Europe up to 45 ° (i.e. between northeast and southeast). 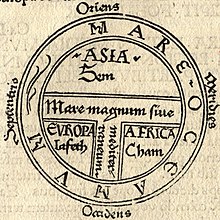 East comes from the old high dt. ostan 'east'. The term "Osten" (or its adjective "Ostlich") has been used in German since the 15th century. Originally the direction of the compass (poetically until today) was also referred to as "towards sunrise". As Anglo-Saxon eâst, the word is root-related to Greek eos and Latin aurora , both of which mean both dawn and morning personified as a goddess.

Early maps were not north up but faces east oriented, because the holy city of Jerusalem lay in the east. In the Christian faith , the East is, among other things, the direction associated with the one-time return of the risen Christ . For this reason, many churches are geosted . The word orientation ( Latin oriens east) also has its origin in the east.

In ancient mythology there is Greek Anatole or Anatolia , goddess of the sunrise , also a Roman Hore , compare Anatolia for the 'land in the east'.

In Nordic mythology , the four dwarfs Norðri, Suðri, Austri and Vestri carry the skull of Ymir , from which the sir built the vault of heaven, Austri is the dwarf of the East - this word has been preserved in Austrasia / Austria , the Eastern Franconia, as well as in Ostarrîchi / Austria , the words for Austria .

In China , the branch of the hare (卯mǎo ) and the trigram thunder (震zhèn ) symbolize the direction of the east.

The association of spring with morning and east is widespread. Whether there is a real etymological connection with Easter , the spring festival, is not beyond doubt.

Devout Muslims bow to Mecca while praying . In the western world this corresponds to a bow in an easterly direction.

While East is pronounced with a short »O« in standard language, a long »O« is used in radio communications or in military language to avoid confusion with West ( explicit sounding ). Furthermore, "eastward" can be used instead of "eastward".

As a technical abbreviation for east, the capital letter ' E ' is usually used in navigation and cartography (English east , French est ) in order to avoid confusion with zero. In the Romance-speaking area, the letter "O", which stands for west (French ouest , Italian ovest , Spanish oeste ), can also be confused .

East is one of the four cardinal points and is of particular importance for geography and navigation, according to the compass . On the eastern half of the sky all the stars rise (analogously they sink on the western half). The east often also serves as the coordinate direction (in mathematics usually as the abscissa x , in geodesy as the ordinate y ; the latter is therefore also called the east value ).

From a geometrical point of view, the direction of the compass “east” or “east” (abbreviation O, E) forms one of the two bisectors between north (0 degrees ) and south (180 degrees).

East in a figurative sense 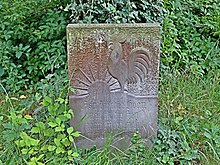 Memorial stone of the displaced persons in Bussau from 1979

The countries in the Asian, Muslim East were summarized under the term Orient - where (apparently) "the sun rises". Opposite it stands the western world , the occident. The notion of an "Orient" is still alive in the terms Near East , Middle East and Far East . In his book Orientalism, Edward Said deconstructs the Orient as Western Othering . From a western point of view, the East is described as backward, mysterious and unenlightened and thus represents the counter-image of the progressive West. The dichotomy Orient-Occident has also only been documented since the 18th century.

Similar to the Orient , the image of Eastern Europe is also shaped by comparable external descriptions, as in the culture carrier theory . In the Cold War discourse , “East” referred to the socialist states of the Warsaw Pact in contrast to the democratic West.