The title of this article is ambiguous. Further meanings are listed under Ymir (disambiguation) . 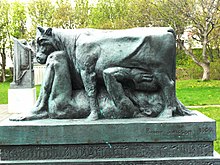 Ymir (old Norse "twin, hermaphrodite" or "noise") is a giant in Norse mythology who is considered the first living being. His name is considered to be very old and is linguistically related to the ancient Indian Yama and the ancient Persian Yima . Another giant of the Nordic prehistoric times called Aurgelmir (or Urgelmer or Örgelmir ) is often equated with Ymir.

Ymir was a two-sex primeval giant. It originated from the mixing of the glacier ice from Niflheim with the fire from Muspellsheim and fed on the milk of the original cow Auðhumbla . When he had drunk the milk of the original cow, he fell asleep. The sweat under his left arm grew out of his son and daughter, both without names. With his feet he produced a son of six who is equated with the giant Thrudgelmir . 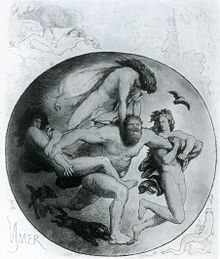 The first gods, Odin , Vé and Vili , killed Ymir and built the world out of his body parts: earth became out of his flesh, the sea out of blood, rocks and mountains out of his bones, trees out of his hair, Midgard out of his eyebrows , from his skull the sky and from his brain the clouds. In a similar cosmogonic myth, the world emerged from the Indian primitive man Purusha .

All ancient giants drowned in the blood of Ymir. Only Bergelmir , Thrudgelmir's son , escaped with his wife on a boat-like pedestal. He is considered the progenitor of the giant family of the Hrimthursen .