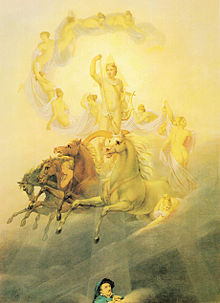 Apollo with the Hores (painting by Georg Friedrich Kersting , 1822)

The Horen ( Greek  ῟Ωραι , Hōrai , Latinized Horae , "the times", "the seasons") are the goddesses in Greek mythology who supervise the regular life. They are said to have determined and woven a person's life on a loom. The Greek word hōra means "time" or "period"; it can denote a year, a season, a time of day, or an hour.

As daughters of Zeus and Themis, they are goddesses of Greek mythology . They watch over human work in a benevolent manner and, as Homer reports in the Iliad , guard the gates of heaven by pushing the thick clouds away or forward under the roar of thunder. Their names change depending on the source.

In the Attic they consisted of Thallo , Auxo and Karpo , who were goddesses of the seasons. (The Greeks then only differentiated between spring, summer and winter.) In art they were usually portrayed as young, attractive women, surrounded by brightly colored flowers and lush vegetation or other symbols of fertility . They were especially venerated among the rural population of Greece .

In the most ancient times the Horen are deities of the heavenly cloud water. That is why they are later attributed dewy robes and they also have a well (cloud water) in which they can bathe. The earth owes its colorful spring decorations to them and so they wear flowery clothes themselves. Like the Charites who are close to them, they are also venerated as the goddesses of spring.

Their importance as goddesses of the changing times results from the regular sequence of their gifts and thus the seasons .

The second generation in Hesiod's theogony consisted of Eunomia , Dike, and Eirene , who were goddesses of law and order and who maintained the stability of society. They were especially venerated in the cities of Athens , Argos and Olympia .

Only a few authors mention a third generation of hearing:

Finally there are the 12 (originally only 10) hours, protective goddesses of the different times of the day. The Roman hours were counted from just before sunrise to just after sunset:

Four groups of ears are distinguished as figures representing the seasons: