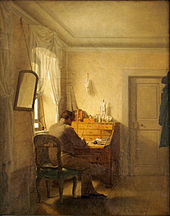 Study with gentleman at the secretary

Kersting was friends with Caspar David Friedrich and influenced by him. He belonged to the circle of romantics and developed into one of the most important representatives of interior painting of the Biedermeier period .

Kersting was born as the son of a large glass master in the Güstrower Handwerkerviertel in a small half-timbered house on Hollstrasse . He attended the cathedral school in Güstrow . Presumably his father gave him his first painting lessons. Thanks to the support of wealthy relatives, he was able to complete a three-year course at the renowned Royal Danish Academy of Art in Copenhagen from 1804 or 1805 , where Nicolai Abildgaard and Christian August Lorentzen were his teachers, but they had little influence on him. In contrast, he was apparently impressed by Jens Juel's way of painting . Then he went to Dresden to enroll at the local art academy.

CD Friedrich on a hike in the Giant Mountains, 1810

In Dresden he joined a group that included Gerhard von Kügelgen , Theodor Körner , the painter Louise Seidler and Caspar David Friedrich . In 1809 he stayed for a short time in Rostock , where two views of the city were taken. In 1810 he was back in Dresden, from where he went on a hike to the Giant Mountains with his friend Caspar David Friedrich . From 1811 he taught the children of the publisher and bookseller Carl Friedrich Ernst Frommann , whom he portrayed many years later, in drawing.

He achieved his first successes with interior paintings of the studios of his artist friends, especially with a picture of Friedrich in his studio, which he showed in the academy exhibition in 1811. In 1813, at Goethe's suggestion, the Weimar court bought the “Man at the Secretary” and the first version of the “Embroiderer”. The painting, which is considered particularly typical of Kersting, shows Louise Seidler sitting at the window doing some handicraft. Goethe had been made aware of Kersting and his distressed situation through Louise Seidler, which is why Goethe also organized a lottery in favor of Kersting. Thanks to their earnings, “The Elegant Reader” could also be purchased. The lot fell on Louise Seidler's father, who later sold the picture to the ducal collection.

After Napoleon's defeat in Russia in 1812 , the national forces in Germany gained votes, so that finally the Prussian King Friedrich Wilhelm III. on February 3, 1813 gave his consent to the formation of Freikorps.

Kersting, who frequented the Kügelgens and Körner's parents, had also been politicized. He therefore joined the Lützow Corps , with the Kügelgens and the painters Caspar David Friedrich and Ferdinand Hartmann providing him with the means to enable Kersting to purchase a kit. For this reason, in a self-portrait as a Lützower hunter, he demonstratively holds a bag in his hand. He took part in various battles against the Napoleonic troops, distinguished himself through bravery in the Battle of the Göhrde and received the Iron Cross for his service , which can also be seen on another self-portrait from the time.

After the wars of liberation were over , Kersting returned to Dresden in 1814/15. In 1815 there were also pictures that commemorate the comrades who died in the war. The well-known picture Auf Vorposten shows Heinrich Hartmann (lying, left), Theodor Körner (sitting, center) and Friedrich Friesen (standing, right) as Lützow hunters in a piece of prototypical German oak forest. All three fell in 1813/14. The picture shows them in a calm and thoughtful mood, far from the noise of battle. The last two verses of Eichendorff's poem An die Lützowschen Jäger read:

Many a man had to go down
under the green lawn,
And war and spring
happily passed over him.

Where we rest, where we live: that
forest
short rushes away
through my life with its green crowns .

Eichendorff had also belonged to the Lützow Freicorps.

The counterpart to On Outpost is Die Kranzwinderin . It shows a girl sitting in the oak forest, who winds a wreath out of oak branches, as it may be used to commemorate German heroes. A brook runs at their feet. The names Hartmann, Körner and Friesen are carved into the oak trunks behind the girl.

But Kersting found it very difficult to find a living as an artist in Dresden, which was badly affected by the war. Therefore, from the beginning of 1816 to 1818 he worked as a drawing teacher for the children of Princess Anna Zofia Sapieha in Warsaw . During this time the second version of the embroiderer and the couple at the window were created .

Head of the porcelain factory in Meissen

Technical drawing of a kiln made by Kersting

On June 23, 1818, Kersting was appointed head painter at the Royal Saxon Porcelain Manufactory in Meißen , where he remained active until the end of his life. At that time, the manufactory was in a deep crisis, both in terms of the technical processes and the design and alignment of the products with demand. These problems had been tackled since 1814 under the direction of Heinrich Gottlieb Kühn , particularly with regard to the production process. On the other hand, Kersting should try to improve the qualifications of the painters' corps. Kühn had said about the 140 or so porcelain painters in 1814 as follows:

"[...] a corps of painters, alienated with a few exceptions from the true sense of art and a free, genuine artistic treatment of painting, at best misled, accustomed to laborious painting [...]"

If these difficulties were considered to have been overcome in the 1830s and Meißner porcelain regained a high reputation in the 1840s, this is at least partly thanks to Kersting. One of the requirements at the beginning of his activity was not so much the design of luxury porcelain, but of high quality mass porcelain, with a uniformity of form and decor being sought. This was achieved in an exemplary manner with the “Meißner Rose” décor introduced in Kersting's time.

When he was appointed head painter, Kersting lived for the first time in economically secure circumstances with an annual salary of 400 thalers and 200 thalers in royalties, which enabled him to marry and start a family.

In 1822 he created Apollo with the hours , a painting with a Masonic theme. He had already been accepted into the Masonic lodge Phoebus Apoll in Güstrow as an “apprentice” in 1809, then just 24 years old . In the meantime he had been promoted to “Master” and took the opportunity to thank him for the friendship he had shown by means of a painting that contained the specific symbolism of the Lodge.

In addition, several interior paintings belong to this period, according to Junge Frau, sewing by the light of a lamp (1825), in front of the mirror (1827) and a third version of the embroiderer (1827). The later work also includes some excursions into the field of history painting , e.g. B. Faust in the study (1829), which perhaps go back to the suggestion of his son Hermann Karl Kersting , as well as still lifes with flowers that can be seen in connection with his professional activity. Again and again he painted his children and his surroundings, e.g. B. Am Meißner Schloßkeller , a genre scene from the Albrechtsburg , which at that time housed the porcelain factory.

In 1818 he married Agnes Sergel, the daughter of the Dresden court postmaster, who gave him four children, along with their sons Ernst, Richard and Hermann and their daughter Annchen. Hermann Karl Kersting (1825–1850), who died early, was a history and landscape painter. He attended the Dresden Art Academy and was a student of Eduard Bendemann and Julius Schnorr von Carolsfeld . Two small paintings by him and his brother Richard have survived, which he made in 1843 when Richard went to Riga to take up a position as a chemist. His son Hermann Kersting (1863-1937) was known as an Africa explorer.

Georg Friedrich Kersting was a member of the Masonic Lodge Phoebus Apollo in Güstrow. He died in 1847 at the age of 61.

Initially influenced by the art of Caspar David Friedrich, Kersting soon turned to interior painting. He created Biedermeier scenes that usually only show a single person, mostly close to the artist and immersed in their activities, in a closed room. Typical of the artist is the play with light that either falls through a window ( embroiderer on the window ) or radiates from a lamp ( young woman, sewing by the light of a lamp , the elegant reader ). Kersting is best known for the motif of the embroiderer on the window , which was created in several versions , but also created portraits , landscapes and historical pictures in the 1830s and 1840s . The interior treatment of Kersting (in particular the observation and coloristic management of sunlight) is placed in a row with the interior paintings of Jan Vermeer van Delft .