Joseph Karl Benedikt Freiherr von Eichendorff (born March 10, 1788 at Lubowitz Castle near Ratibor , Upper Silesia , †  November 26, 1857 in Neisse , Upper Silesia) was an important poet and writer of German Romanticism . With around five thousand settings, he is one of the most widely set German-language poets and is still present today as a prose poet ( From the life of a good-for-nothing ) . 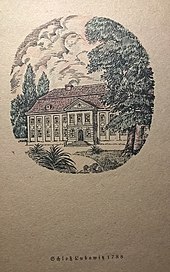 Eichendorff's parents were the Prussian officer Adolf Theodor Rudolf Freiherr von Eichendorff (1756-1818) and his wife Karoline geb. Freiin von Kloch (1766–1822). His mother came from a noble Silesian family, from whose property she inherited Lubowitz Castle . The Catholic noble family of Eichendorff has been resident in Silesia since the 17th century.

From 1793 to 1801 Joseph was taught at home by Pastor Bernhard Heinke with his brother Wilhelm von Eichendorff, who was one and a half years older than him. In addition to extensive reading of adventure and chivalric novels and ancient legends, the first childlike literary attempts followed. In 1794 he traveled to Prague , 1799 to Karlovy Vary and again to Prague, after which he recorded his impressions of the journey in the first notes. On November 12, 1800, he began to write a diary and write a natural history with his own illustrations.

In October 1801 Joseph and Wilhelm began attending the Catholic Matthias Gymnasium in Breslau with an internal apartment in the St. Josephs Konvikt (until 1804). His father's cousin, Johann Friedrich von Eichendorff, made it possible to attend grammar school through financial grants, because the father - who temporarily owned several properties - had suffered business ruin a year earlier and was on the run from his creditors. Frequent visits to the theater and early poems are known from this period. The friendship with his classmate Joseph Christian von Zedlitz was also established here. From 1805 to 1806 studied Eichendorff in Hall Jura and also visited philological lectures by Friedrich August Wolf , Friedrich Schleiermacher and Henrik Steffens . While visiting the theater in Bad Lauchstädt , he saw a guest performance by Goethe's Weimar stage. A journey through the Harz Mountains took him to Hamburg and Lübeck . In August 1806 Eichendorff returned to Lubowitz Castle, where he enjoyed the social life with balls and hunts in the area.

In May 1807 the decision was made to continue studying in Heidelberg in order to avoid the war after the siege of the neighboring city of Cosel by Napoleonic and Bavarian troops. Heidelberg in the new, the Napoleonic Confederation of the Rhine associated Grand Duchy of Baden ran avoid attack risk and the university was much has been invested by the 1803rd The route was chosen so that war-endangered Prussian areas were avoided. Instead, a southern detour via Moravia , Austria and Bavaria was chosen. The two brothers left on May 4, 1807 and traveled to Heidelberg via Linz , Regensburg and Nuremberg .

Eichendorff attended legal lectures there with Anton Friedrich Justus Thibaut , but attended a. a. also those at Joseph Görres . He became briefly acquainted with Achim von Arnim ; a closer friendship connected him with the poet Otto von Loeben ("Isidorus Orientalis"). Together with their friends theologians Friedrich Strauss and Wilhelm Budde (1786–1860, pseudonym "Astralis") they formed the "Eleusinian League" and exchanged their poems.

In April 1808 Eichendorff undertook an educational trip initiated by Görres, which took him via Strasbourg to Paris . On May 13th, he traveled from Heidelberg via Würzburg and Nuremberg to Regensburg, where he arrived on May 25th, 1808. From there the journey continued with the mail boat on the Danube to Vienna . In the summer he returned to Lubowitz to help his father manage the property. His first publication appeared under the pseudonym “Florens”, it was the reprint of some poems in Ast's “Journal for Science and Art”. Around this time he also began to write the fairy tale novella Die Zauberei im Fall .

In 1809 Eichendorff got engaged to Aloysia von Larisch (1792–1855), called Luise , the seventeen-year-old daughter of the landowner Johann von Larisch , who lived in Pogrzebień in the Ratibor district.

In November 1809 Eichendorff went to Berlin with his brother, where he attended private lectures by the philosopher Fichte and met the writers Arnim , Brentano and Kleist . In the summer of 1810 he continued his law studies in Vienna and graduated in 1812.

From 1813 to 1815 Eichendorff took part in the Wars of Liberation against Napoleon , first as a Lützower Jäger , then as a lieutenant in the 3rd Battalion of the 17th Silesian Landwehr Infantry Regiment in the devastated Torgau Fortress and finally again, after his marriage, in the 1st Battalion of the 2nd Rhenish Landwehr Infantry Regiment (Upper Rhine) entering Paris. He stayed with the occupation forces until the end of 1815 and did not return to Breslau until the following year.

In April 1815 Eichendorff married Luise von Larisch in Breslau, in the same year his first son Hermann was born, in 1817 the second son Rudolf, in 1819 the daughter Therese, in 1821 the daughter Agnes, who died the following year, and in 1830 the daughter Anna († 1832). After the death of Eichendorff's father in 1818, most of the family's heavily indebted goods were sold except for Lubowitz Castle and Sedlnitz Estate . Eichendorff mourned the loss of the world of his childhood all his life.

After Eichendorff had entered the Prussian civil service as a trainee lawyer in Breslau in 1816, he was appointed to the Catholic Church and School Council in Danzig in 1821, and in 1824 to the Senior President in Königsberg . The family moved to Berlin in 1831 with the services of several Prussian ministries . 1841 Eichendorff was a Privy Councilor appointed. After severe pneumonia in 1843, he retired in 1844. In 1846 he translated some of Pedro Calderón de la Barca's religious dramas. 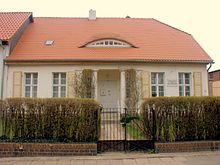 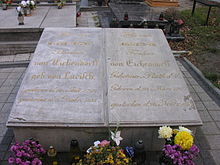 He moved with his wife Luise to his daughter Therese and her husband, the Prussian officer Louis von Besserer-Dahlfingen. After the death of his brother Wilhelm on January 7, 1849, Eichendorff inherited the manor of Sedlnitz . To escape the unrest of the revolution, he traveled from Dresden to Köthen for a few days in 1849 . There his daughter bought the house of Major Nicolaus Joseph von Holly-Ponienczecz in 1854. The exact reasons for the acquisition are unclear, as the daughter rarely stayed in Koethen and her father saw himself as the house owner by his own admission. Eichendorff went to Koethen again in April 1855 and stayed in his house until October.

From 1856 to 1857 Eichendorff lived as a guest of the Breslau prince-bishop Heinrich Förster at his summer residence at Schloss Johannisberg near Jauernig and was also active as a writer there. In the last decade of his life, Eichendorff finished his literary work and instead became a journalist. During this time his "History of Poetic Literature" was created.

Eichendorff is counted among the most important German writers who are still admired today. Many of his poems were set to music and often sung. His novella From the life of a good-for-nothing is considered the climax and at the same time the end of the romantic era .

Eichendorff's idyllic descriptions of nature and simple life are characterized by a simple imagery and choice of words. Behind this, however, is a complex network of metaphorical symbolism for the interpretation of the world, nature and soul, which stands out from pure utility thinking (Eichendorff wrote in the age of the beginning industrial revolution ).

It is typical of many of Eichendorff's works that, due to his own strong attachment to faith, they are often in a religious context. In contrast to Clemens Brentano , Eichendorff's Catholicism was neither characterized by agonies of the soul nor by a particular missionary zeal. It is also noteworthy that - unlike so many other romantics under Fichte's influence - he did not succumb to any nationalistic German foolishness that downgraded other peoples, but sought European coexistence. In Eichendorff's works and self-testimonies, there are no anti-Semitic failures, as occurred in his literary contemporaries such as Brentano or Achim von Arnim (both of whom were appreciated by Eichendorff), even if Eichendorff (in accordance with his time) expressly also additionally identified persons of Jewish faith referred to her name as "Jews" (occasionally with attributes such as "rich" and "frivolous") and thus expressed a certain detachment.

"Eichendorff is not a poet of home, but of homesickness, not of the fulfilled moment, but of longing, not of arrival, but of departure," says Rüdiger Safranski , who adopts and adds a phrase from Theodor W. Adorno .

Eichendorff Memorial in Neisse, The Gazebo (1888)

The Eichendorff Society , which existed from 1931 to 2010, was dedicated to researching the life, work and impact of Eichendorff.

With the Eichendorff badge , the highest state award for mountain and hiking clubs in the Federal Republic of Germany is named after him.

In many cities streets bear the name of Joseph von Eichendorff. 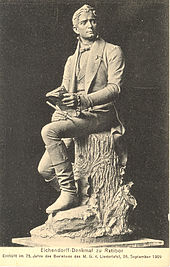 Memorial stone in front of the House of Silesia 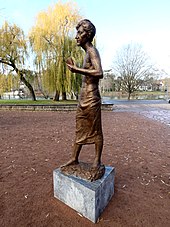 Information partly according to the "Central Register of Prussian Person and War Monuments". Monument in Lubowitz and new construction in Racibórz by sight. 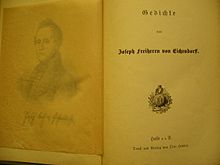 Poems - Edition of the Otto-Hendel-Verlag Halle, undated (around 1907)