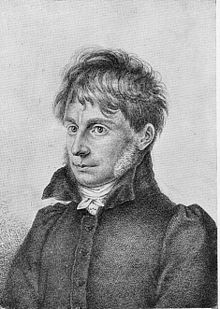 Joseph Görres, lithograph by August Strixner, after a painting by Peter von Cornelius

Johann Joseph Görres , from 1839 von Görres , (born January 25, 1776 in Koblenz , † January 29, 1848 in Munich ) was a German high school and university teacher as well as a Catholic publicist , who became known as a natural philosopher primarily for his four-volume Christian mysticism .

Görres, the son of a timber merchant and an Italian, was a supporter of the French Revolution when he was a student at a Jesuit grammar school and was enthusiastic about the democratic movement that grew stronger in the last decade of the 18th century. At the age of 22, he was the editor of the magazine Das Rote Blatt , which celebrated the revolution and called for the establishment of a Cisrhenan republic in the Rhineland . After a stay in Paris in 1799/1800, during which he and other delegates were supposed to prepare the annexation of the German areas on the left bank of the Rhine to France , Görres showed himself disgusted by the despotism, arbitrariness and horror that prevailed in the center of the republic at that time. He found a supporter of his ideas in General Commissioner Joseph Lakanal , who was reorganizing the new departments from Mainz, now in France . For Görres, Napoleon's seizure of power was the culmination of an undesirable development through which France increasingly distanced itself from the ideals of the revolution. Especially the war policy of the emperor, the high loss of life, the occupation and exploitation of German territories met with Görres' resistance. After his stay in France, he initially withdrew from political activity and became a physics teacher at the grammar school in Koblenz, but then began to write against the undesirable developments in the revolution.

Görres continued his education in the fields of natural science and medicine, applied galvanism as a therapist and published natural philosophical works such as Growth of History (1807), in which he discussed the " dualism of historical temporality and myth".

During this politically inactive phase his work as a private lecturer fell from the winter semester 1806/1807 to 1808 in Heidelberg , where he held scientific-medical and literary-philosophical lectures. There he met Clemens Brentano and Achim von Arnim . Under the influence of these romantics, he published the Teutschen Volksbücher (1807). During the Wars of Liberation Görres also published political writings again, now determined by Romanticism and the German national movement. With no prospect of a permanent job in Heidelberg, Görres went back to the grammar school in Koblenz. On January 23, 1814, he founded the Rheinische Merkur in Koblenz . Among other things, the paper provided a forum for Freiherr vom Stein and Blücher's general staff, and Napoleon described it as the “fifth hostile great power”.

In his journalism, Görres campaigned for the unity, self-determination and democratization of Germany, but which should preserve the traditions and peculiarities of the past on the foundation of Christianity ( Germany and the revolution ). He was a member of a French Masonic Lodge in Koblenz and was also a member of the casino company there. 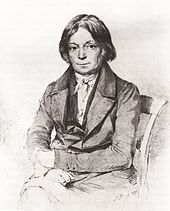 After the restoration began , the Rheinische Merkur propagated liberal demands and the Greater German solution . On January 3, 1816, a Prussian cabinet order forbade the publication of the newspaper, and Görres published the last edition of the paper on January 10, 1816. Finally, the post of head of education in the Generalgouvernement Mittelrhein was withdrawn from him. Görres fled to Strasbourg in 1819 by his schoolmate, Abundius Maehler , mayor of Koblenz , who warned him of the threat of arrest . Under difficult economic conditions there took place his change from a liberal to a religious and less and less political author.

This change opened the way for Görres to be appointed to the University of Munich by Ludwig von Bayern in 1827 . In Munich, Görres gathered a group of followers who became an intellectual center of political Catholicism . In 1837 he wrote a violent pamphlet against the Prussian state (Athanasius) in the church dispute in Cologne , from 1838 he worked on the historical-political papers for Catholic Germany , which were published by his son, the writer Guido Görres and the legal scholar George Phillips. His late work turned to Christian mysticism . In 1839 he was ennobled by Ludwig I. In 1841/1842 Joseph Görres was one of the initiators, alongside Sulpiz Boisserée and August Reichensperger, in founding the Central Cathedral Building Association in Cologne . In 1842 he was made a full member of the Bavarian Academy of Sciences .

Görres was one of the most influential publicists of the first half of the 19th century. Political scientist Klaus von Beyme admits that Görres had a long-lasting effect on political journalism. The farewell speech written by Görres, Napoleon's proclamation to the peoples of Europe before his departure to the island of Elba , contains a criticism apparently expressed by Napoleon of the lack of national awareness of the Germans. The quote contained therein “There is no more good-natured, but also no gullible people than the German. […] For a slogan that was given to them, they persecuted their compatriots with greater bitterness than their real enemies “was often mistaken for Napoleon's. The literary scholar Gerhard Schulz praised Görre's linguistic power, which he compared with that of Friedrich Hölderlin in his Scheltrede to the Germans.

His motivation to create a Christian-inspired democracy in a united Germany prompted Görres in a late publication to take an anti-Judaist position. Corresponding tendencies can be seen in the pamphlet The Eternal Jew in Saxony and the Council in Swabia , which he published together with the canon lawyer Georg Phillips (in: Historisch -politische Blätter für das Catholic Deutschland , Vol. 16, 1845, pp. 503–505 ). They were hardly noticed after Görres' death, as they do not play a role in his overall work. Here Görres was rather tolerant and open to different cultures, which he researched systematically and with great zeal ( myth history of the Asian world ). The Catholic advocated the thesis that cultural peculiarities and mentalities should be reflected in the political systems.

The Joseph Görres memorial in the Rhine complex in Koblenz