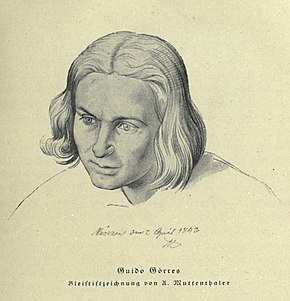 In the course of his historical work he came into contact with Charles de Montalembert , among others, and in the 1830s he increasingly turned to writing. In addition, Görres was always active in Catholic political journalism and had connections and contact with leading conservative Catholic circles via the Eos and Görres districts. Together with George Phillips , he was involved in founding the historical-political papers for his father's Catholic Germany . After the death of his father, he took over the editorial office. After his death, the editor was passed on to his sister Marie Görres .

Görres mainly composed sacred songs, some of which also found their way into popular songs.