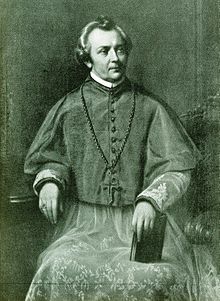 Heinrich Ernst Karl Förster (born November 24, 1799 in Glogau in Lower Silesia , † October 20, 1881 in Johannesberg ) was a German Roman Catholic theologian and priest as well as cathedral preacher, cathedral provost, diocese administrator, capitular vicar, politician (member of the Frankfurt National Assembly 1848) and from 1853 to 1881 Prince-Bishop of Breslau .

Heinrich Förster was the second of three children of the master painter and portrait painter Johann Kasper Förster and his wife Marianne geb. Rittler (1771–1823) born and the day after by the chaplain Joh. Nep. Gerstel in the Catholic parish of Glogau in the name of Henricus Ernestus Carolus baptized. His sister Monica Henrietta Carolina was born in 1797, his brother Eduard Johannes Josef, who became a drawing teacher at the Catholic grammar school in Glatz , was born in 1808. During the French occupation of Glogau from 1806 to 1814 Heinrich Förster lived with his parents and siblings in the nearby Klopschen (Kłobuczyn) .

From 1814 to 1821 Förster attended the Royal Catholic High School in Glogau, where the mediocre pupil was particularly enthusiastic about declamation and artistic drawing.

From 1821 to 1824 Heinrich Förster studied Catholic theology at the Wroclaw University "Leopoldina" . Here he became a member of the Arminia Breslau fraternity in 1821 and was a good fencer.

After priestly ordination on April 17, 1825 ( first Mass in the church of St. Mary on the sand , he worked in Breslau) through 1827 as chaplain at St. John's Church (under Pastor August top of Glogau) in Legnica and in 1828 first as parochial administrator , then 1829 to 1837 as pastor in Landeshut , where he carried out barometer and thermometer measurements for the Silesian Society for Patriotic Culture in 1836/37 and already had a reputation as a good preacher. By Leopold von Sedlnitzky he was appointed cathedral preacher and resident canon (cathedral capitular) at the Breslau cathedral in October 1837 . His successor in Landeshut was Joseph Klopsch (1802–1879). In 1843 Förster was promoted to Dr. theol. PhD and closest collaborator to the designated Prince-Bishop Melchior von Diepenbrock (both received honorary doctorates from the Catholic theological faculty of the University of Breslau in April 1845).

On June 3, 1844, Förster met his future friend, the traveling actor and writer Karl von Holtei , at a celebratory dinner on the occasion of an anniversary event in Oels , whose stepmother and stepsister lived in Oels.

In contrast to the pro-government attitude of Prince-Bishop Leopold von Sedlnitzky, who was tolerant towards the Protestants at the time, Förster took the ecclesiastical point of view in the " mixed marriage dispute " and asked the bishop to resign as a councilor to the Prince-Bishop General on June 2, 1840, because of his indulgent attitude towards the government. Vicariate office. In his sermons, Förster also dealt with political issues, such as B. German Catholicism , which he rejected, or the March Revolution . He preached against the suspended priest Johannes Ronge on November 10, 1844 in the cathedral.

Allegations of plagiarism against Förster became loud after his collection of sermons Homilies on Sundays appeared in the first edition in 1845/46, which apparently had the sermon collection Sermons for Thinking Admirers of Jesus by the Protestant cathedral preacher Johann Heinrich Bernhard Dräseke as a template.

In 1848 Förster was elected to the Frankfurt National Assembly as a member of the constituency of Ahaus - Steinfurt in Westphalia, where his sponsor, Prince Bishop Diepenbrock came from, from which he - also under the impression of the bloody unrest and the murder of the Silesian Prince Felix von Lichnowsky - retired on October 23rd to take part in the Würzburg Bishops' Conference that began on that day . At this Würzburg Synod of 1848, the first German bishops' conference , he represented the sick Bishop Melchior von Diepenbrock from Breslau and wrote a pioneering pastoral letter on his behalf .

Following an offer from Peter Joseph Blum , the Bishop of Limburg , Förster took over the position of pastor at the cathedral parish of St. Bartholomew in Frankfurt am Main, which had been vacant since June 1848, on June 30, 1849. Associated with this was a canon position in the cathedral chapter of Limburg an der Lahn . In the 1850 bishop's election in Mainz , Förster was one of three candidates - but Wilhelm Emmanuel Freiherr von Ketteler was elected .

After the death of Prince-Bishop Diepenbrock on January 20, 1853, Förster was elected vicar capitular and diocese administrator of Wroclaw on January 27 . On May 19, 1853, the Breslau cathedral chapter elected Heinrich Förster as bishop with 16 out of 18 votes. Pope Pius IX confirmed the election on September 12, 1853 in Rome. The Archbishop of Prague , "His Highness" Cardinal Friedrich zu Schwarzenberg , gave him on 18 October of the same year, the episcopal ordination ( consecration ) and led the enthronement forester for Prince Bishop by where the Inthronisationspredigt of the Wroclaw theologians and Domfestprediger Joseph Hubert Reinkens held has been. Mitkonsekrator Breslauer was Auxiliary Bishop Daniel Latussek . As a bishop, Förster continued the religious renewal measures that his predecessor had begun. During his term of office the establishment of the Neisser Knabenkonvikt falls , in 1866 the opening of the newly built building of the Breslauer Knabenkonviktes, the construction of the Michaeliskirche in Breslau from 1862 to 1869 by Alexis Langer , the establishment of the congregation of the Sisters of Mary , the entry of the Sisters of the Good Shepherd in the diocese and the expansion of the club life. He held diocesan meetings for the clergy . Förster's guests at his summer residence, Schloss Johannesberg , included the poet Joseph Freiherr von Eichendorff in autumn 1856 and August / September 1857 . In 1858 Förster gave a sermon on the marriage of Peter V , King of Portugal, to Princess Stephanie of Hohenzollern-Sigmaringen .

As Prince-Bishop of Breslau, Heinrich Förster was a member of the Silesian state parliament . On November 22, 1869 he traveled to Rome, where he took part in the First Vatican Council from 1869 to 1870 , at which he was part of the opposition to the definition of the dogma of infallibility (Already in October 1854, Förster had made a trip to Rome that lasted until January 1855, where on November 19 he was appointed Pontifical House Prelate and Assistant to the Throne , Solio Pontificio Assistens , and the Pope carried out the solemn definition of the dogma of the Immaculate Conception on December 8, 1854). With 87 other bishops, Förster voted against the Pope's infallibility in matters of faith and left Rome on July 17, 1870, together with other critical bishops. He could not prevent the splitting off of the Old Catholics triggered by the dogma , which was also supported by individual members of the Wroclaw Catholic Faculty . Förster subsequently submitted to the dogmatic constitution De ecclesia Christi , proclaimed the relevant chapter De Romani Pontificis infallibili magisterio to his diocesans and also proceeded with excommunications against those who tried to publicly oppose the dogma. For example, the theology professor and former friend of Förster's Joseph Hubert Reinkens, who had supported the theology professor Johann Baptist Baltzer as dean , who had been deprived of the missio canonica by Förster in 1860, was excommunicated , as well as on May 14, 1873, who appointed Förster in 1872 at the suggestion of Förster's government Wroclaw Cathedral Capitular Karl Freiherr von Richthofen (1832–1876).

Förster offered resolute resistance to the church laws planned by the government in the (Prussian) Kulturkampf , in which he, because of the excommunication of pro-government priests - such as the chaplain Carl Jentsch (1833-1917; Curatus in Harpersdorf , who joined the Old Catholic Church in 1875 and who was ordained by Förster in 1856) in the district of Goldberg ) - and unpleasant parish occupations has been fined several times. In March 1875 he was asked to resign from the office of bishop "because of his opposition in principle to church laws" by the Upper President of Silesia in Breslau , and after he had refused a preliminary investigation was initiated against him.

On December 12, 1873, Förster was sentenced by the Breslau City Court for not reporting any changes to the position of the President in 29 cases. The execution of the fine of 11,600 thalers took place in January 1874 through the seizure of the prince-bishop's furniture.

Because of the imminent imprisonment for violating the "Kulturkampfgesetze" in Prussia, he went on May 6, 1875 - three weeks after his golden jubilee as a priest, for which he was awarded the archbishop's pallium on April 17, 1875 by Pope Pius IX Wroclaw residence in the summer residence of Johannesberg Castle near Jauernig in the Austrian part of his diocese. On October 6, 1875, the state court for ecclesiastical affairs ordered Förster's removal, which, however, had no consequences under canon law. The celebration of his 25th bishop's jubilee took place on October 18, 1878 in Johannesberg. Although Förster spent the rest of his life in exile, he was buried in Johannesberg Castle in Breslau Cathedral on October 25, 1881 after his death. The exequies were carried out by the Breslau auxiliary bishop Hermann Gleich .

He donated his entire estate, including 50 oil paintings and over 50 copper engravings, to the St. Heinrichs Church in Breslau, consecrated in 1893 and whose name still reminds of him today.