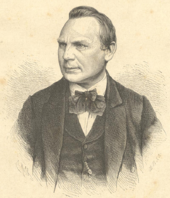 Joseph Hubert Reinkens (born March 1, 1821 in Burtscheid , † January 4, 1896 in Bonn ) was a German theologian and Catholic priest . He is one of the founders and was the first bishop of the Old Catholic Church in Germany .

Joseph Hubert Reinkens came from a poor family with many children. After his mother died in 1836 and his father became unable to work, he worked for a time in a factory in neighboring Aachen before he was able to attend grammar school from 1840. From 1844 he studied Catholic theology and classical philology at the Rheinische Friedrich-Wilhelms-Universität Bonn .

Ordained a priest in Cologne on September 3, 1848 , he continued studying church history in Bonn. After 1850 in Munich on Clement of Alexandria as a theologian to the doctor of theology doctorate was, he got a teaching position at the Silesian Friedrich-Wilhelms-University of Breslau , where he habilitated . In 1853 he became an associate professor and deputy cathedral preacher , and in 1857 professor for church history. In 1865/66 he was rector of the University of Breslau.

In the conflict that broke out between Prince-Bishop Heinrich Förster and Johann Baptist Baltzer , Reinkens, Förster's former friend, was on Baltzer's side. Reinkens made his rejection of the dogma of infallibility public with his writing Pope und Papstum, based on the drawing of St. Bernard (Münster 1870). As a result, Förster imposed a disciplinary investigation on the author. With Ignaz von Döllinger , Johann Friedrich von Schulte and Franz Heinrich Reusch , he drafted the Nuremberg Declaration against the First Vatican Council on August 26 and 27, 1870 . From then on he devoted himself entirely to the cause of the Old Catholics, who elected him their first bishop in Cologne on June 4, 1873. Heinrich Förster excommunicated him in 1872. On August 11, 1873 he received in Rotterdam by Hermann Heykamp , the Old Catholic Bishop of the Diocese of Deventer , the episcopal ordination . He headed the German diocese until his death in 1896.

The philosophy faculty of the University of Leipzig awarded him an honorary doctorate in 1871 .