This article deals with the theologian. For the physician, see Ignaz Döllinger . 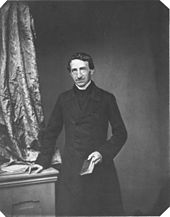 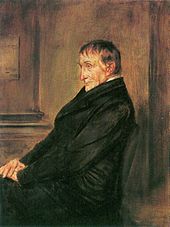 Grave of Ignaz von Döllinger in the old southern cemetery in Munich. The bust that is integrated into the tomb comes from Adolf von Hildebrand .

Johann Joseph Ignaz Döllinger , knight of Döllinger since 1868 (born February 28, 1799 in Bamberg , † January 10, 1890 in Munich ), was a German Catholic theologian and church historian and one of the spiritual fathers of the Old Catholic Church .

Döllinger's father was the physician Professor Ignaz Döllinger . In 1822 Döllinger was ordained a priest, and in 1826 he was appointed to the University of Munich by King Ludwig I of Bavaria . There he initially emerged as a staunch opponent of Protestantism and the Enlightenment . He made a name for himself early on as a church historian and with his two-volume history of the Christian church (1833/36) and his textbook on church history (1836/38) he created standard works of Catholic church historiography in Germany and Austria for decades. From 1837 to 1847 he worked alongside his professorship for church history and canon law as senior librarian (i.e. director) of the Munich University Library . In 1847 he was sentenced to two years after being involved in the protests of Catholic students against the king's affair with Lola Montez .

Döllinger's political foster father was the former Jacobin Josef von Görres , whose circle he joined. In 1848 he was elected to the Frankfurt National Assembly. At the end of the same year he presented his concept of a German national church to the Bishops' Conference, which should have its own primate and a certain degree of autonomy. In Rome, he was wrongly assumed to follow the “spirit of innovation, democracy and general revolution”. Together with Theodor zu Stolberg , he played a leading role in founding the Bonifatiusverein , which was conceived as a missionary organization for Germany .

Döllinger's pupils included the future bishops Wilhelm von Ketteler and Heinrich Brück as well as the Cologne social reformer Adolph Kolping , who, after studying in Munich (1840–1842), was in correspondence with Döllinger for the rest of his life; also the later professor and honorary doctor of the Old Catholic Faculty in Bern Franz Hirschwälder .

Before and during the First Vatican , Döllinger was one of the main Catholic opponents and sharpest German-speaking agitators against that of Pius IX. enforced papal dogmas. The dogma of the infallibility of the papacy , which Döllinger strictly rejected for historical and theological reasons, was decisive for his resistance . He also continued to campaign for the separation of church and state .

Ignaz Döllinger and his favorite student Lord Acton (1834–1902), an English historian and liberal Catholic, had a friendship lasting for decades . Through him he was well informed about the First Vatican and tried to prevent the proclamation of the dogmas of papal infallibility and the papal primacy of jurisdiction through sensational harsh comments in the Augsburger Allgemeine Zeitung .

Although Döllinger's activities in the circle of infallibility critics together with Johann Friedrich von Schulte , Franz Heinrich Reusch and the later Bishop Joseph Hubert Reinkens had given the impetus to found the Old Catholic Church in Germany ( Nuremberg Declaration of August 26 and 27, 1870 against the First Vatican Council), he long resisted the schism with Rome, for which Schulte in particular criticized him. Even after the council, Döllinger did not end his sharp attacks on the dogma of infallibility, to which the Archbishop of Munich and Freising, Gregor von Scherr , reacted in 1871 with the imposition of excommunication . Döllinger adhered to the ban on exercising priestly service associated with the excommunication by the official church leadership, although he felt the church punishment was unjust. The 72-year-old's academic career was by no means over: in 1872 he became rector of the University of Munich, and in 1873 King Ludwig II of Bavaria appointed him to the presidium of the Bavarian Academy of Sciences . In 1872 he was elected an honorary member of the Göttingen Academy of Sciences .

As in the wake of the Berlin Antisemitism dispute 1880/81 in Germany rapidly an aggressive, anti-Jewish sentiment spread, whose central idea was the notion that Jews were a non-integrable in Germany foreign bodies held Dollinger on July 25, 1881 during a special plenary session of the Munich Academy for On the birthday of King Ludwig II of Bavaria, he received a much-noticed speech in which he first recapitulated the history of the Jews in Europe, which he essentially portrayed as a history of successive persecutions, and then underlined and recorded the roots of German Jews in Western culture the generally very strong German stamping of Jewish thought indicated: Today “Germany is the bearer and foster father of intellectual life in Judaism”. His admission culminated in an appeal to banish hatred and contempt for other peoples from political thought.

The process of change from Döllinger's Catholic to an “Old Catholic”, who, however, did not formally join the Old Catholic Church, can also be demonstrated in his relationship with Luther . The radical nature of Luther's rejection, which is evident in Döllinger's writings of the 1840s and 1850s, is no longer to be found in the early 1860s. The rejection of the papal dogmas may be a reason for changing his judgment. Döllinger's writings from earlier years also had some influence on ultramontane historiography , especially with regard to the evaluation of Luther and the Reformation , and showed their long-term effects e.g. B. with Johannes Janssen , Ludwig von Pastor , Hartmann Grisar and Heinrich Denifle . Döllinger's extensive lexicon article about Luther, which appeared in the leading German-language Catholic church lexicon Wetzer and Welte’s in 1851 and was also distributed as a separate print in the same year , was for a long time the model for the Catholic assessment of Luther and was in the second edition of the Catholic church lexicon in 1893 regardless of the interim Developments republished. It permanently clouded Döllinger's relationship with contemporary Lutheran theologians and church historians.

However, Döllinger had already publicly advocated unification efforts of the separate Christian denominations since the 1860s. In an effort to overcome the division of the Church, he initiated the Bonn Union Conferences in 1874 and 1875. In the later years of his life, too, he advocated the reunification of Christians as an ecclesiastical ideal. Döllinger is therefore considered a pioneer of ecumenism . The efforts of his former pupil and now Archbishop Anton von Steichele to win Döllinger back for the Roman Catholic Church, however, remained in vain.

The evaluation of Döllinger in church historiography is still partly shaped by confessional standpoints: While the Old Catholic movement assigns Ignaz von Döllinger the importance of a spiritus rector and "church father", it is often emphasized in Roman Catholic literature that he ultimately did not have the Way of the Old Catholics can agree and never joined this church. The image of Döllinger and its assessment in Roman Catholic theology have, however, changed significantly in the last few decades. In the place of the earlier sharply and polemically articulated rejection of Döllinger as excommunicated and opponent of infallibility, there has often been an understanding of seeing Döllinger as a pioneer of today's Catholic theology and not just perceiving it as an opponent of the First Vatican Council. On this point, there are similarities with Old Catholic views, which also do not want to limit its meaning to opposition to the dogma of infallibility.

In contrast to his theological role, Döllinger's importance as a church historian is widely recognized across confessional and subject boundaries and has long been undisputed.