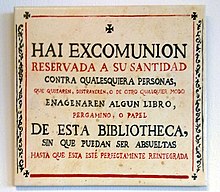 Excommunication (Latin excommunicatio , to the prefix ex- "from", outside; commūnis here communion , Eucharist ) is in the broader sense the temporary or permanent exclusion from a church or a religious community or from certain activities in such a community. It is used as a flexion penalty, i.e. until the wrongdoing has been terminated or redeemed.

In the e. S. is it part of the canon law , generally of canon law . The history of canon law is closely linked to the emergence of internal church structures and their external development. This is how three major epochs can be divided:

Before the consolidation of canon law in the Roman Catholic Church , the term anathema ( ancient Greek ἀνάθημα or ἀνάθεμα “the consecrated, cursing”) was used to denote a 'ban from church' or - in connection with a cursing - a 'curse', ie a condemnation by a church that goes hand in hand with exclusion from the ecclesiastical community and, under canon law, is to be equated with excommunication.

Even in the early Christian Church, excommunication and anathema were instruments of episcopal jurisdiction and in fact meant exclusion from the community of believers. The Catholic Church continued to develop this punitive device throughout its history and ultimately anchored it in canon law . Thus, at the First Council of Nicaea in 325, the Alexandrian presbyter Arius , who denied the full essential unity of Jesus Christ with God the Father, and his followers were 'banished'.

Under Pope Eugene III. The Decretum Gratiani, named after the Camaldolese monk Gratian , was created between 1140 and 1150 as the first collection of papal legal decrees of the Jus novum and thus the actual preliminary stage of the Codex Juris Canonici . In this collection u. a. dealt with the handling of excommunication.

Under Pope Innocent III. (1198–1216), excommunication underwent a fundamental change. Together with the interdict and the suspension , it is referred to as flexion punishment ( poena medicinalis ) and is differentiated from the church punishment ( poena vindicativa ) ( church punishment ). In excommunication, a distinction must be made between an offense ( poena latae sententiae ) and a sentence punishment ( poena ferendae sententiae ). In the first case, excommunication occurs automatically, for example in the event of an abortion , heresy or as a schismatic. In the second case, the sentence would have to be imposed by a bishop , and later in the context of a formal administrative or judicial process. Innocent III. changed church law permanently at the 4th Lateran Council (1215); he is considered one of the most important canon lawyers of the Middle Ages . So he had a wealth of procedural rules passed at the council. His draft on the financing of the Roman dicasteries was rejected, however, while the other canons were solemnly confirmed. These were later structured by the glossators , numbered and included in various canon law collections and found the widest reception in the European particular churches , u. a. on provincial synods .

There are precedents for excommunication in the New Testament . In the Gospel of Matthew , Jesus commands his disciples to look upon a brother who sins and persists in his sin despite repeated admonitions “like a pagan or a tax collector ” ( Mt 18.17  EU ).

The apostle Paul called on the Corinthian church to ban (“surrender to Satan”) those who commit sexual immorality with their father's wife ( 1 Cor 5 : 1-5  EU ). He himself carried out the "surrender to Satan" to Christians who had blasphemed God with their words and deeds:

"Some have disregarded the voice of their conscience and have suffered shipwreck in their faith, including Hymenaeus and Alexander, whom I handed over to Satan so that through this punishment they learn not to blaspheme God any more."

In the Roman Catholic Church , excommunication does not mean exclusion from the church (which is impossible under canon law ), but the loss of church fellowship and thus certain rights within the church. According to the 1983 CIC , the excommunicated person is not entitled to bestow or receive the sacraments or sacramentals . In addition, he is not allowed to exercise any church office or church services and tasks.

According to canon law , a distinction is made between the

Excommunication as a criminal offense only occurs in those cases in which the person concerned was aware that the act he had committed is a criminal offense on the part of the church. Since the offense already occurs when the act is committed, it is not necessary that it is confirmed or announced by a bishop or the Pope; However, this can be done under certain circumstances in order to make the event known to the believers.

In special cases, especially when a believer is in danger of death, there are exceptions to the excommunication of a donor or recipient of sacraments . It can also just be exposed. In this context, the public declaration of the excommunication that has occurred plays a role.

In Germany, in particular, the declaration of leaving the church at the responsible state authority is considered a reason for excommunication. This practice has been challenged by an opinion of the Pontifical Council on Legal Texts , which this declaration alone does not consider sufficient. Because of the forwarding of the declaration to the congregations and because the resignation represents a “refusal of the solidarity contribution obligation” due to the elimination of the church tax obligation, the German bishops want to stick to the previous practice.

The visible consequences for laypeople are above all the exclusion from the sacraments of the Eucharist , confession, church marriage and the anointing of the sick, as well as sacramentals such as church funerals .

The excommunication of opponents of the infallibility dogma was banned in the German Reich in May 1873 .

In addition to excommunication, there is also exclusion by declaring someone anathema , but this only happens in cases of serious and unrepentant heresy . In this case, too, the person is not condemned by the church, but left to himself outside the church. Only in 1965 was the mutual excommunication between the Eastern and Western Churches by Pope Paul VI. and repealed the Patriarch Athinagoras .

In most Protestant churches there is a legal possibility to exclude someone from the Lord's Supper for serious reasons . However, it is very rarely put into practice (see the article church discipline ).

The Reformation Anabaptist movement also knows the possibility of being excluded from the congregation. The Schleitheim article of 1527 already mentions the ban in the second article. However, this must be preceded by a twofold admonition. The Mennonite Dordrecht Confession of 1632 also addresses the ban from the community in Articles 16 and 17. The use of the ban, however, also gave rise to discussions and conflicts between the individual Anabaptist groups. The more traditionalist Anabaptist communities such as the Old Mennonites , the Amish and the Hutterites practice the so-called avoidance based on their respective order after unsuccessful admonition , which is suspended when the person asks the community for forgiveness and changes his behavior.

In free churches there is the legal possibility of congregational exclusion. Often, members who have fallen out of favor try to forestall the exclusion by moving to another free church. Switching to a Christian community of equal faith is generally only possible through a “referral” (recommendation) from the community to which one belonged.

The Islam knows no excommunication, since no institution exists that could be responsible. However, there is the concept of avoidance (see also al-Walā 'wa-l-barā' ) and Takfīr .

Within the Church of Jesus Christ of Latter-day Saints , one person is disfellowshipped who still has membership status but has limited membership rights. This measure is pronounced for serious violations of church commandments and rules. A person who has been disfellowshipped has his or her temple recommendation slip withdrawn. This means that this member is no longer allowed to enter the temple. Furthermore, this person is not allowed to serve in any church office or perform priesthood acts. The person is also not allowed to give public speeches or lead public prayers. Additional conditions can also be imposed for disfellowshipping, such as: B. the distance to pornographic writings and other negative influences in terms of church morality. Additional requirements can include reading Mormon literature and attending meetings regularly. However, disfellowshipped members should continue to pay “ tithes ” and “ fasting sacrifices ”. Also, if they have already received the endowment , they should continue to wear temple underwear and strive to seek sincerely repentant return to the church community.

With Jehovah's Witnesses excommunication is referred to as "disfellowshipping" and is supposed to be practiced as avoidance . In their opinion, among other things, the Bible texts from 1 Cor 5 : 11-13  EU and 2 John 1 : 8-11 EU prove that disfellowshipping was  already common among the original Christians . This sanction usually applies to those members who no longer recognize the “Governing Body” as an authority and who publicly announce this (apostasy) or who are guilty of serious misconduct against the principles of faith of Jehovah's Witnesses and do not regret it . Most of the time, those affected leave the community of their own accord before they are excluded. Disfellowshipping can be reversed by resuming. Re-entry into the religious community is possible upon written application under certain conditions. Disfellowshipping and re-enrollment will be announced without giving a reason in meetings where the person concerned has close contacts and is well known. The announcements have the prescribed wording: "(Name of the person) is no longer a Jehovah's Witness" in cases of disfellowship and "(Name of the person) has been reinstated as Jehovah's Witness" in the event of a reinstatement.

Other communities also know forms that are comparable to excommunication. In the case of the Christadelphians , members are disfellowshipped in the event of (unrepentant) violations of the principles of faith, which means a ban on participating in active congregation life and the memorial meal. Those excluded are free to attend the meetings. In practice, disfellowshipping leads to at least greater detachment on the part of the other members of the congregation. In the event of repentance, the resumption usually takes place.

The New Apostolic Church also knows an exclusion. The responsible District Apostle makes the decision. This also applies to the resumption of members who have resigned or been excluded.