Copy of the manuscript

The Decretum Gratiani (also Concordia discordantium canonum ) is the work of 1140 by the legal scholar Gratian, who teaches in Bologna and is considered the father of canon studies . 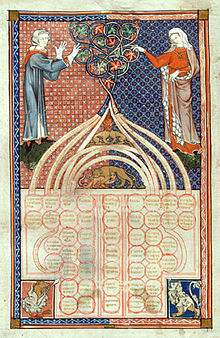 The sources of the canon law teacher Gratian were Roman law, the Bible , decretals (papal letters), council and synodal acts and older legal collections, such as the so-called collection in three books , a collection only preserved in two manuscripts, which had a major influence on the second edition of the decree Gratiani exercised. He collected the rules that had arisen over the centuries and summarized them - albeit still quite unsystematically. Dealing with this subject made it seem sensible to have a standard work comparable to the Corpus Iuris Civilis for canon law as well. Canon , a provision of canon law, corresponds to the Roman legal term lex , as found in the Digest . The idea of ​​writing a standard canonical work marked the birth of the Decretum. Its creation had a signal effect: From this time on, canon law was scientifically taught and processed at the Bologna School of Law .

The Decretum Gratiani is regarded as the beginning of canon law as an independent science on the one hand. Since Irnerius devoted himself to reassessing Roman law about a generation earlier and in the same city, both influenced each other and the future legal system equally. Their comparable approach led to a uniform process that was to have an impact up to the modern age, because they created a ius commune , a general right that, as the right of “legislators and canonists”, was to shape the future.

The two legal processes were embedded in a historical situation in which the Church and the Pope exercised supremacy in Europe. They were at the height of their power. The church had meanwhile become a hierarchically structured and powerful large organization. She succeeded in doing this particularly by enforcing celibacy in the investiture dispute . It was endowed with elements of state power, which soon served as a model for the sovereign princes' striving for power . In order to support this apparatus, a uniform law had to apply that had at least a basic order. Gratian was able to create this and, building on his ratio, it was possible to further develop the principles of order without falling into self-regulation - as it was later in the Middle Ages .

Further developments of the Gratians collection were reflected in new papal decisions, for example in the Liber Extra of 1234 and in the Liber Sextus of 1298. In the 1580s, the work Corpus iuris civilis by Gothofredus (1583) was given its current name in its edition. He leaned on the new concept of the gratian work, Corpus iuris canonici .

Gratian himself called his work Concordia Discordantium Canonum ( Latin: agreement of conflicting rules ) and represents a not strictly systematic, scholastic method of writing canon law up to the second Lateran Council of 1139. The name says it all: Gratian tried to harmonize apparently opposing canons with one another , he discusses different opinions and decides on a solution. It has occasionally been claimed that Gratian did not use Burchard von Worms ' Decretorum Libri XX . This claim is incorrect. Other collections of law were used by Gratian in a much more systematic way, but the name Burchard even appears twice in the Decretum: both times D.73 c.1. Freisen proves that Gratian includes a probably falsified passage used by Burchard in his decree and corrects it: C.35 q.5 c.1 and C.35 q.4 c.1 - in Burchard Bur. 7.10 ( Lit .: Freisen, pp. 16, 417, 421).

The dialectical way of working made it interesting for other law teachers to work with the decree and develop their own solutions and comments. Gratian had developed general sentences ( distinctiones ), formulated fictitious legal cases for their presentation ( causae ), posed legal questions ( quaestiones ) and harmonized contradictions in dicta ( paragraphi ). These comments were initially written in the form of glosses , just like in the legislature . Printed editions from the 16th or 17th centuries are very often edited with glosses. Collections of glosses are called gloss apparatus or lectura in decretum (see also glossators ). Systematic comments are called sums . Very soon some of these sums were in circulation for the decree and achieved comparable fame. Early commentators were Paucapalea (before 1148) and Magister Rolandus , whom one - probably erroneously - referred to as Pope Alexander III. (1159-1181) identified.

The most important commentators were Rufinus of Bologna († before 1192) and Huguccio († 1210). Less known was the sum of Simon von Bisignano . His work consists of glosses to the decree and the Summa Simonis.

One of the important effects of the Decretum Gratiani was the fact that the old church interest prohibition found general use in the medieval church. But the idea about the “ just price ” ( iustum pretium ) cast in a regulation also comes from the source. Against the Roman law, which was developing in parallel, the decretum was able to assert itself to the effect that the legal formal requirements were relaxed.