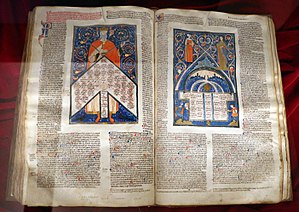 The author is Raimund von Peñafort (former Magister of Bologna), who was commissioned by Gregory IX. (1227-1241) was active. Peñafort was entrusted with this work in 1230 and completed it within four years. On September 5, 1234, the Liber was specially promulgated with the Bull Rex pacificus as an official collection of laws and sent to the universities of Bologna and Paris . The Liber Extra had to be written because the Quinque Compilationes Antiquae were neither complete nor free from errors and mistakes. There were also numerous other collections.

Peñaforte sifted through the material contained in the Quinque Compilationes Antiquae and rearranged it, with contradictions being removed through interpolations and corrections and superfluous or useless parts were dropped in order to adapt them to the applicable law. He left out the facts, but this led to confusion (he left out those parts of the recorded texts that he thought were superfluous and marked them with the words et infra ). In later editions, however, they were reinserted by Le Conte by consulting the Compilationes Antiquae.

Each chapter has its own heading ( inscriptio ), which indicates the origin and a table of contents ( summarium ) added later .

383 decretals were omitted from the old compilations. For this 7 decretals of Pope Innocent III. and 195 decretals of Gregory IX. inserted. He also issued new decretals for the purpose of clarifying and improving the law. The work is divided into 5 books and sorted by title, ie while the structure is systematic, the individual sources (chapters) are sorted chronologically, starting with the oldest texts.

The Liber Extra was of paramount importance for the development of canon law . According to the Decretum Gratiani, it is regarded as the most important collection of papal decretals to date . It replaced the old five compilations and received the force of law, as a uniform code of law. The sources contained therein, regardless of what period they came from and in what form (modified or original) or whether they were genuine or originally falsified sources or merely expressed particular law, became the universal law of the Church. Because of its widespread use throughout Europe, the Liber Extra had a normative effect on the understanding of law for later generations.

The relationship to other legal sources

Of the individual chapters, only the dispositive (standard-creating) part is legally binding. However, the legally binding effect only extends to the source text as found in the new compilation, regardless of its historical origin or wording in other collections. All parts of the Liber Extra were promulgated at the same time, so that there was no temporal priority of one decretal over another. The title headings are binding if they express a legal sentence in full or in analogy. Summaries and inscriptions had no legal force.

The chapter headings introduced by Peñaforte, which relate to the narrative part of the source texts, have no legal force. The compilation was exclusive in the sense that it abolished all conflicting universal law and did not allow any other formal source for the applicable universal law issued after Gratian's decree. Thus the work has less the character of a compilation than a codification of the ius novum, the parts of which had the same authority. It is therefore an official, authentic, uniform, universal and exclusive collection with all the consequences.

The papal bull and peñaforte speak of a compilatio. It was also called Compilatio nova in contrast to the Quinque Compilationes Antiquae . It was also known as Liber Extravagantium. The most general name was Liber Extra (Liber Decretalium extra Decretum Gratiani vagantium) or more modern: Decretals of Gregory IX. For a short time only extra.

It found widespread use, to which its official character contributed significantly. Today there are still 675 manuscripts. This made the Liber extra “the most famous European legal text in the Middle Ages”. The first printed edition appeared in Strasbourg around 1468.

The text base in use today is the edition by Richter and Friedberg. 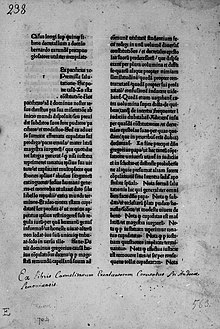 Especially for the Liber extra