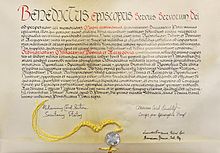 Papal bull or bull for short is the name for documents that proclaim important legal acts of the Pope . They were solemnly drawn up and sealed in the papal chancellery . Characteristic is the replacement of the salutatio with the formula ad perpetuam rei memoriam ("for the permanent memory of the thing").

The official Latin name of this genus of documents is litterae apostolicae , which translates as "apostolic letters", or litterae apostolicae sub plumbo , in German "apostolic letters with lead seals" or simply "apostolic seal letters" when they are translated from breven or normal litterae want to delimit. The word "bull" comes from the Latin bulla ("bubble"). The papal documents of the Middle Ages and the early modern period were regularly sealed with lead. The expression "bull" or bullae was especially popular in the 15th centuryOften used in non-official language for papal documents, which in modern diplomacy are not counted as cops in the narrower sense.

The bull, which emerged as a hybrid of the older splendor documents or "splendid bulls" called " privileges " in the technical language of diplomacy, and the litterae , had been in use since the middle of the 13th century and especially in the 15th century. In the 20th century, papal bulls were only issued very rarely, for example to bring the Code of Canon Law ( Codex Iuris Canonici ) into force in 1917 and to convene a Holy Year . Since 1740, the form of the encyclical (circular) has been chosen more frequently for educational acts by the Pope, and the Apostolic Constitution or the Motu proprio for legal acts .

The name of the bull is based on the initial words of the Arenga . Each bull begins with: < Pope's name > episcopus, servus servorum Dei ...

On June 18, 1452, Nicholas V legitimized the slave trade with the bull Dum diversas , empowering the Portuguese king "to conquer the lands of the infidels, to drive out their inhabitants, to subjugate them and to force them into eternal servitude".

On December 5, 1484, Innocent VIII published the edict Summis desiderantes affectibus , also called the witch bull , with which the Pope asked the authorities to support two inquisitors in the witch hunt. This witch bull of the Pope paved the way into one of the darkest epochs of Europe, the witch hunt.