The diplomacy (diplomatics, from ancient Greek δίπλωμα Diploma , German , Folded ' from διπλώος diplóos double') is one of the basic disciplines of historical auxiliary sciences . It deals with the classification, the characteristics, the exhibition (persons involved, the course of business of the law firms, aids such as formula books ), the tradition, the authenticity and the historical value of legal documents . The main research interests of German-speaking researchers were primarily the European documents of the Middle Ages and the early modern period . But there is also extensive research on Tibetan , Mongolian, Ottoman or Arabic documents. The scientists involved in this research area are known as diplomats . 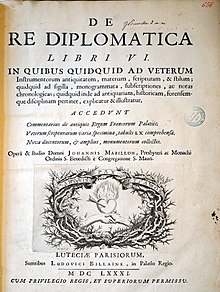 The term “diplomatics” probably goes back to the font De re diplomatica ( Latin for “About the documents”, Paris 1681) by the Benedictine Dom Jean Mabillon (1632–1707). He had been commissioned by his order to create a defense document that was supposed to defend the historically justified claims to property against attacks by the Jesuit order. In particular, it should provide an answer to the doubts of the Belgian Jesuit Daniel Papebroek, which he had expressed about the authenticity of the oldest Merovingian documents of the Abbey of Saint-Denis . Mabillon developed scientific, i.e. verifiable, methods for establishing the authenticity and forgery of the documents in question and thus created the basis of modern document theory.

Proof of the authenticity of documents was initially the main purpose of diplomacy (Latin discrimen veri ac falsi , differentiating between what is true and what is false). The total forgery or the modification of documents, the latter by overwriting ( e.g. palimpsest ), erasing or adding (negative or positive interpolation ), was used, especially in the Middle Ages, to establish non-existent rights or rights that were not previously documented by documents, to secure. The assignment to the historical auxiliary sciences did not take place until the 19th century, since the fight against forgeries was at the center of diplomacy and it was to be seen more as a part of law.

When examining documents, their palaeographic , linguistic and content characteristics as well as their tradition and typology are evaluated.

The founders of the scientific study of the documents in German-speaking countries are the Austrian Benedictine monks Bernhard Pez and Hieronymus Pez , the Bavarian Benedictine Karl Meichelbeck , the Swabian Magnoald Ziegelbauer , and Johann Heumann von Teutschenbrunn . In the course of the 19th century, diplomacy was practiced very intensively in Germany, which is why some German technical terms also have international significance.

The core of the special diplomacy, as established by Theodor von Sickel in the middle of the 19th century, is the question of the legal nature of an individual document. The document researcher tries to find the internal and external characteristics of the document in other contemporary documents in order to infer the practice of the group of people who created documents for a prince, clergy or an institution (“ chancellery ”). The focus of the investigation is on the person who drafted the text of the document ( dictator ) and the person who actually wrote the document on the parchment ( mundant ).

Document review as a sub-discipline

Document criticism is the most important sub-discipline of diplomacy. Their function is to determine the source quality of a document. The aim is to determine the informative value of a certificate. The basic method is the comparison , whereby by examining external and internal characteristics, authenticity , office-like character and other special features of a document are ascertained, which can be of relevance for the historical interpretation .

With the help of the document criticism, many "documents", especially documents from the Middle Ages and the early modern period , could meanwhile be identified as forged documents . B. the famous Constantine donation .

Deperdita defy traditional document criticism, but their value is emphasized in more recent research, for example with regard to times with few sources (such as the early Middle Ages ), and they are also taken into account in newer editions.