The title of this article is ambiguous. Further meanings are listed under seal (disambiguation) . 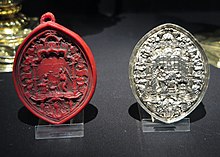 Seal and seal stamp of the Aachen Marienstift in the form of a mandorla , Hans von Reutlingen , 1528 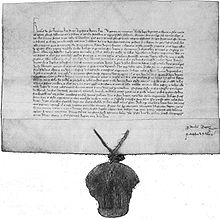 The seal (from the Latin sigillum `` little picture '' ) is a form of authentication of documents or assurance (closure) of the intactness of objects or containers (envelope, door) with the help of a seal stamp or, sphragistically (scientifically) correct, a typar that is inserted into a soft, hardening mass is pressed (sealing lumps of sealing wax , wax , early clay, etc.). Often there is no conceptual differentiation between “seal” as an imprint and “seal stamp” as an embossing tool. The Slavic term seal (n.) Can also be used for “seal stamp” .

The expression seal has been used since the 14th century and is derived from the Middle High German sigel and the Middle Low German seg (g) el . It is borrowed from the Latin sigillum - 'seal imprint', a diminutive of signum - 'sign, mark, image in the seal '.

The earliest stamp seals in the Middle East cannot be proven before the Tell Halaf period . Cylinder seals are first found in Sumer between 3200 and 3100 BC. In the Uruk IV layer . These are small stone cylinders ( seal stones ) made of onyx , lapis lazuli , agate or other materials, in which figures and inscriptions have been engraved (seal engraving) . The size varies between 0.15 and 10 centimeters. The characteristic seal impression is created by rolling the cylinder into a soft mass (e.g. clay). Around the same time, between 1600 BC, BC and 1500 BC In ancient Egypt , Ugarit and the Hittites, the signet rings were found, although the signet ring was not in use in Mesopotamia . The Asian seals are cut into hardwood , bone , ivory , marble , soapstone, or jade .

Clay seal impressions can be found with the Sumerians, Assyrians and Babylonians (cylinder seals), later with Greeks and Romans, who took over the rulers of the early Middle Ages. In contrast to the cylindrical cylinder seals of the Babylonians, the Cretans and Hittites used the seal with a round seal.

Signature of a painter, Chinese

Even more than in the East (and later Europe), where the seal is always the character of a certification has retained, in East Asia is the seal of unequivocal proof of identity - there represents the seal until today the role of the handwritten signature respectively the signature in the western culture. The significance of the seal is so great that an ancient script of its own has been preserved for it, the seal script (Zhuanshu).

Seals, which have often been symbols of royal or aristocratic power since antiquity, initially indicated individual personalities, then corporations. There were imperial seals in China from the first millennium BC. In Byzantium they had existed since the 6th century, and papal seals since the 9th century. In the early and high Middle Ages, emperors, kings, members of the nobility and the high clergy were sealed in Europe. Citizens have also made use of this type of authentication since around the 13th century. Seals of religious corporations have been found since the 11th century, city seals since the beginning of the 12th century (Trier 1113, Cologne 1149).

Metal seals , the bulls , were made of gold , lead, or (less often) silver . In the Holy Roman Empire, they were mainly reserved for the popes (see Golden Bull of Charles IV ) or the Byzantine emperors for documents of particular political and constitutional importance. Lead bulls were mostly massive, while gold bulls were almost never. Rather, it was a matter of joined gold plates, which were filled with various materials (wax, sawdust, etc.). Solid gold bulls are only known from the Byzantine area and the Norman Kingdom of Sicily.

In the Middle Ages, wax seals carried most documents and legal transactions of all kinds. The seal - ring or stamp - is pressed into sealing wax . The popes as well as the Roman German emperors and subordinate seal leaders differed by colored wax seals with the following ranking:

Sealing wax , which is more heat-resistant than wax , has also been used since the 16th century . Pictorial representations (e.g. coats of arms) have been used in seals since the 11th century. Later, instead of the wax, so-called wafers (round white paper surfaces) were used, which were glued to the paper and then shaped under high pressure with the help of heat (as with embossing ) into a relief, the impression.

The misuse of the seal was prevented by being kept by high officials specially appointed for this purpose, the seal keepers . This task later became an office and a title (see  Lord Seal Keeper in England).

Sealed capsules are usually made of wood or metal for seals. In particular in Roman times they were used to protect the seals on documents such as wax tablets.

Sealing pots are small bowls (usually made of metal) that are attached to a container (e.g. a safe ) to hold sealing cords and seals (usually imprints in plasticine ). They serve to identify people who have opened the container and then closed it again.

Provided with a handle, one is Seal also Petschaft called - are older signet rings . The seal itself can be pressed onto the certificate or through a cut in the parchment . Attached seals are attached to cords made of hemp, silk, other fabrics or strips of parchment. These parchment strips, called pressels , were, like the cords, often pulled through a parchment fold, the plica , in order to increase the hold in the parchment and to prevent tearing.

The most common shape in Europe is the round seal , while the Chinese Yinjian , for example, are rectangular - the Japanese Hanko are also round.

Other embodiments with a sealing function are stickers such as the deposit seal (colloquially also called cuckoo ), the approval sticker attached to vehicle license plates , seals on closures and devices, security stamps on measuring devices, seal stamps and sealing tapes.

Notaries use a sealing cord to connect multi-page documents, the ends of which are secured with an embossed seal made of paper and a wafer .

In a broader sense:

Seal in the private / civil area

Sealing stamps and types for use with sealing wax (seals, seal rings, etc.) are only required in the private / civil sector by various postal services for the dispatch of value items ( value letters or parcels) to seal the item (in Germany until 2010).

There is usually no regulation for the design of the typefaces, and imprints of coins and buttons are generally not permitted.

Otherwise seals are mostly only used for the stylish design of honorary certificates and private correspondence.

A private sealing seal (also a seal or seal mark ) on a container or on a “ scaled ” document, including a document connected with eyelets, thread and seal, indicates that the issuer does not want the document to be manipulated and that it is in the present form was created once.

Legally, every official "seal" is unique (compared to any " stamp " that can be produced at will - it behaves in a similar way to the difference between flag and flag ). Who is allowed to run it is specifically regulated. The breaking of a seal , the unauthorized destruction of a seal that has been affixed by an authority, a public official or otherwise on an official basis, is punishable in Germany ( Section 136 (2 ) StGB ). Likewise, it is not permitted to use a stamp that can be confused with the seal of a public official or an authority. A seal stamp of an authority that has become unusable may only be destroyed with the assistance of a witness and with an appropriate protocol. The decommissioning of seal stamps is published in the respective official gazettes. For this purpose, seals have a unique number.