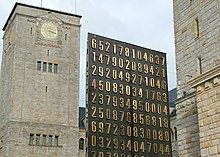 Cryptologist memorial in front of the Poznan Residential Castle, inscribed with random texts made of digits

The adjective cryptic is outside the scientific jargon used in a general sense of "unclear or ambiguous in the expression and therefore difficult to understand."

An important principle of modern cryptography is Kerckhoffs' principle. Accordingly, the security of a cryptosystem must not depend on the secrecy of the algorithm. Security is based on the confidentiality of freely selectable input variables of the algorithm. In the case of encryption methods, these are, for example, the secret keys .

The International Association for Cryptologic Research (IACR) has been a scientific professional association for cryptology since 1982 . The IACR organizes cryptological conferences , publishes the renowned journal Journal of Cryptology and operates a. a. an electronic archive for scientific work in the field of cryptology.