Encryption (also: ciphering or cryptography ) is the conversion of "clear text" called data into a " ciphertext " (also called "cipher" or "ciphertext"), depending on a key , so that the clear text from the ciphertext can only be obtained using a secret Key can be recovered. It is used to keep messages secret, for example to protect data against unauthorized access or to be able to transmit messages confidentially.

Encryption converts a “plain text”, ie a clearly legible text, into a “ciphertext”, ie an incomprehensible string of characters. The terms plain text and ciphertext have grown over time and should be seen symbolically. In addition to text messages, other types of information can also be encrypted, such as voice messages, image recordings or the source code of programs. The underlying cryptographic principles remain the same. 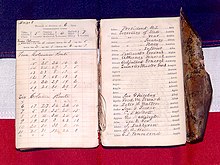 Coding (also: coding) is a special and relatively simple type of encryption . As a rule, it is not individual plain text characters or short character combinations that are encrypted, but entire words, parts of sentences or entire sentences. For example, important commands such as “Attack at dawn!” Or “Withdraw from the hills!” Can be assigned to specific code words or incomprehensible combinations of letters, numbers or other secret symbols. This is mostly done as a tabular list, for example in the form of code books . To increase the cryptographic security of codes, the secret texts obtained with them are often subjected to a second encryption step. This is known as over-encryption (also: over-encryption ). In addition to secret codes, there are also open codes, such as Morse code and ASCII , which are not used for cryptographic purposes and do not represent encryption.

The key parameter in encryption is the "key" . The good choice of a key and its secrecy are important prerequisites for keeping the encrypted secret. In the case of coding, the code book is the key. In the case of most of the classic and also some modern methods of encryption, it is a password (also: password, key word, code word or code word, slogan, slogan or slogan from Italian la parola “the word "; English: password ). With many modern types of encryption, for example email encryption, the user is now spoiled for choice when it comes to choosing a key. The key is generated automatically without his noticing. This also eliminates the “human factor”, namely the often too careless choice of an insecure password that is too short and easy to guess.

The reverse step to encryption is decryption . The authorized recipient recovers the plain text from the ciphertext. A secret key is required for decryption . In the case of symmetrical encryption methods , this is the same as for encryption, but not in the case of asymmetrical methods . If the key is lost, the ciphertext can no longer be decrypted. If the key falls into the wrong hands, third parties can read the ciphertext, so the secret is no longer kept. A summary term for encrypting and / or decrypting the keys .

The term “ decipherment ” must be linguistically separated from decryption . When deciphering the art is referred to wrest his secret message to the ciphertext, without being in possession of the key. This is the work of a cryptanalyst , often called "code breaker" (Engl .: Codebreaker called). In the ideal case, no decipherment is possible because the encryption method is sufficiently "strong". It is then called “unbreakable” or at least “cryptographically strong”. In contrast to “strong encryption”, “weak encryption” can be broken without prior knowledge of the key using cryptanalytical methods with reasonable effort . With advances in cryptology, supposedly strong encryption can prove weak over time. For example, the “ Vigenère encryption ” was known for centuries as “Le Chiffre indéchiffrable” (“The indecipherable encryption”). We now know that this is not the case.

Most encryption methods are only pragmatically secure , which means that no practicable way of deciphering them was found during their cryptanalysis. The longer a method has been publicly known and the more widespread it is in use, the more justified the trust in security is, because the more one can assume that many capable cryptologists have examined it independently of one another and that a possibly existing weakness would have been found and published (see also Kerckhoffs' principle ).

There are procedures whose safety can be proven assuming the validity of certain mathematical assumptions . For the RSA cryptosystem , for example, the following can be shown: The private key of a user can be calculated efficiently from his public key if a large number (of the order of a few hundred decimal places) can be efficiently broken down into its prime factors . The only encryption method whose security has really been proven and not only based on guesswork is the one-time pad .

To illustrate an encryption, the plain text given below (for reasons of better distinguishability as usual in lower case) is converted into a ciphertext (here in upper case) using a very old and extremely simple process, the Caesar encryption . The secret key used here is “C”, the third letter of the Latin alphabet . This means the replacement of each individual plain text letter by the respective letter shifted by three places in the alphabet. For example, the first letter "B" of the plain text becomes the letter "E" in the ciphertext, which appears three places later in the alphabet, and so on:

The ciphertext beginning with “EHYRU” in the example, created here by Caesar encryption (and shown in capital letters as usual for reasons of illustration) is actually incomprehensible at first glance. It is therefore suitable for hiding the information contained in the plain text from strangers. If a possible attacker does not know the underlying encryption method, or if he does not succeed in finding the key used, then the ciphertext has no meaning for him. Of course, the method used in this example, which the ancient Romans already knew, is far too weak to protect the secret message for long. It will not take much effort for an experienced code breaker to decipher the ciphertext after a short time , even without prior knowledge of the key or procedure.

In the course of human history, increasingly stronger methods of encryption have therefore been developed (see also: History of cryptography ). A modern encryption method is the Advanced Encryption Standard (AES) , which is currently considered unbreakable. However, this may change in the coming decades (see also: Cryptanalytic attacks on AES ).

Symmetrical encryption methods use the same key for encryption and decryption. Two classes of encryption can be distinguished in historical methods. With the first, as in the Caesar encryption used in the example, the letters of the plaintext are replaced individually by other letters. With the Latin word substitere (German: "replace") they are referred to as substitution processes . In contrast to this, with the second class of encryption, called transposition (from Latin: transponere ; German: “offset”), each letter remains as it is, but not where it is. Its place in the text is changed, the individual letters of the text are, so to speak, mixed up. A particularly simple form of transposition encryption is the “reverting” (from Latin: reverse ; German: “reverse”) a text , which is popular with children . For example, the ciphertext SINMIEHEG is created from the plain text “secret”.

Interestingly, even modern block ciphers, such as the DES (Data Encryption Standard) encryption method, which became the standard for several decades towards the end of the 20th century, are based on the two classic methods of substitution and transposition. They use these two basic principles in combination and derive their strength significantly from the repeated use of such combinations, not infrequently in dozens of "rounds". So, like kneading dough repeatedly, the plain text is increasingly encrypted. The strength of the encryption usually increases with the number of rounds used.

With asymmetric encryption there are two different keys, the public key for encryption and the private key for decryption
→ Main article : Asymmetric cryptosystem

Since asymmetrical processes are algorithmically more complex than symmetrical ones and are therefore slower to execute, in practice mostly combinations of the two, so-called hybrid processes, are used. For example, a randomly generated individual session key is first exchanged with the help of an asymmetric method, and this is then used together as a key for a symmetric encryption method, whereby the information that is actually to be communicated is encrypted.

In cryptology, a clear delimitation of terms and a clean and consistently used technical terminology serve to facilitate work and avoid misunderstandings. In contrast, colloquial expressions are not infrequently used incorrectly and confused with each other, which can lead to unnecessary and easily avoidable irritations. One example is the improper use of the term decryption when actually deciphering is meant.

Transmission of messages in networks

An encrypted message (e.g. an e-mail or a website) usually has to be transmitted over several stations. Today these are mostly individual computer systems, which means that the encrypted message is transmitted over a computer network. A distinction is made between two fundamentally different modes of transmission. With line encryption, the message is only encrypted for the neighboring computer. The latter decrypts the message, encrypts it in turn (possibly with a different method) and sends it to its neighbor - and so on to the target computer. The advantage of this method is that only neighboring computers have to agree on an encryption method and the key used. In addition, this type of transmission can be located on a very low protocol level (e.g. already in the transmission hardware). The disadvantage is that each individual computer must be trustworthy and secure on the transmission path. With end-to-end encryption, on the other hand, the message is encrypted by the sender and, in this form, transmitted unchanged across several computers to the recipient. Here none of the transmitting computers can see the plain text of the message. The disadvantage, however, is that the sender has to agree on an encryption method and associated key (s) with every possible recipient.

Sensitive data on a data carrier can be protected from unauthorized access in two main ways:

Wikinews: Category: Encryption  - in the news