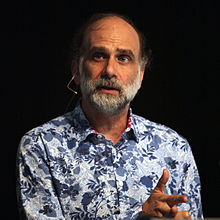 Schneier is a Fellow of the Berkman Center for Internet & Society at Harvard Law School and the Open Technology Institute of the New America Foundation . He was brought into the editorial team of the British newspaper The Guardian , which uncovered the surveillance and espionage affair in 2013 based on the revelations made by Edward Snowden . He is a board member of the Electronic Frontier Foundation .

After earning a bachelor's degree in physics from Rochester University , Schneier studied at American University from 1985 , where he received a master's degree in computer science . During his studies he started working for the Ministry of Defense . He later worked at Bell Labs before founding Counterpane Internet Security in August 1999 . This company was acquired by BT Managed Security Solutions, Mountain View in October 2006 . Today Schneier lives in Minneapolis with his wife, Karen Cooper .

He holds the job title Security Futurologist at British Telecom .

His best-known work is Applied Cryptography , a fundamental work on entering cryptography . There are also a number of publications on computer security and cryptography. The newsletter Crypto-Gram about computers and other security issues is sent to subscribers on a monthly basis. Current problems are addressed here as well as in his blog .

As a result, Schneier intensified his research on more general issues of computer security, on dealing with risks and on socio-political problems associated with cryptography and computer security. Today he also deals intensively with psychological questions of information security , in particular with security awareness and the attitude of users and specialists.

In November 2007 he pointed out in the technology magazine Wired that, in his opinion , a backdoor might be built into one of the four cryptographic random number generators published by NIST in March 2007 , namely the Dual Elliptic Curve Deterministic Random Bit Generator ( Dual EC DRBG ) . It is worth mentioning that the selection of this generator for the standardization was mainly made at the insistence of the NSA . This random number generator is also included with Service Pack 1 in Windows Vista . The suspicion of a backdoor was confirmed in 2013 by documents revealed by Edward Snowden .