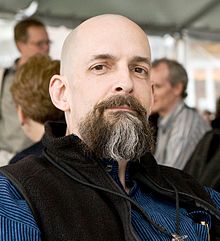 Neal Town Stephenson (born October 31, 1959 in Fort Meade , Maryland , USA ) is a writer living in Seattle . His experiments with new media such as virtual reality and the World Wide Web are reflected in his science fiction novels . He is therefore one of the main representatives of cyberpunk . The term avatar , meaning animated profiles, goes back to his work Snow Crash .

Neal Stephenson comes from a family of engineers and scientists. His mother worked as a biochemist in a laboratory, his father taught electrical engineering, and his grandfathers were professors of physics and biochemistry. In 1960 the family moved with him to Champaign , Illinois , where he grew up until 1966. He then lived in Ames , Iowa , and graduated from high school there in 1977 . He studied physics first, then geography at Boston University until 1981 .

He worked as a consultant for the private space company Blue Origin , founded by Jeff Bezos , and is co-founder of the software company Subutai Corporation . From December 2014 to June 2020 he was Chief Futurist of the US company Magic Leap .

In Stephenson's books, historical elements are often mixed with futuristic technical fantasies; in The Diamond Age , for example, he portrays a society that makes use of highly developed nanotechnology but pays homage to a Victorian - Puritan role model. Stephenson has been devoting himself to historical material since the late 1990s, but with the sensitivity of a science fiction writer. Like many authors, Stephenson thinks little of strict genre boundaries. Superficially, the Cryptonomicon and the Baroque cycle can be assigned to the genre of the historical novel , but both works are saturated with typical SF motifs.

His novel Snow Crash takes place in an America that is fragmented into innumerable mini-nations that are operated as large corporations' franchises , and that has been completely privatized right down to the police and penal system. An advanced virtual reality system that goes hand in hand with a flourishing hacker culture plays an important role in this . There are further references to Sumerian mythology with its god Enki .

In 1995/1996, Stephenson went on a world tour on behalf of Wired magazine and, as a hacker tourist, explored the technical, economic and historical aspects of laying submarine cables on the basis of the Fiber-Optic Link Around the Globe project . His essay was published in December 1996 under the title Mother Earth - Mother Board . He brought some of the experiences he made on the trip to his next book.

His Cryptonomicon deals with the topic of cryptography in two timelines (1940s and 1990s) . Here he interweaves the life story of Lawrence Pritchard Waterhouse, a fictional mathematician who was involved in deciphering the " Enigma " during World War II, with the story of his grandson Randy Waterhouse, who wants to build a data port in Southeast Asia . The Riemann ζ function and the Solitaire encryption algorithm designed by Bruce Schneier play a central role in the novel .

The eight novels of the Baroque cycle were published in three volumes, Quicksilver , Confusion and Principia and are set in the mid-17th to early 18th centuries. In several storylines, they tell the stories of the member of the Royal Society Daniel Waterhouse, the schemer Eliza, who rose to the nobility by chance, and the vagabond Jack Shaftoe, and offer an extensive history of the families that also appear in Cryptonomicon . The epoch from 1655 to 1714 is presented by Stephenson with multilayered and detailed researched background knowledge with its religious, political, social, economic, cultural, scientific and technical upheavals on a total of more than 3000 pages in several parallel, interwoven storylines. In particular, the presentation of the development of the modern financial system (global trade, banking and stock exchange) are more than just a novel background and still explain current mechanisms and relationships.

Stephenson posted on the Internet In the Beginning ... Was the Command Line (in German Dictatorship of beautiful appearance. As graphical user interfaces, the computer user incapacitate ), in contrast to his other works, not a novel, but an essay on free software . In particular, the operating systems Mac OS Classic , Linux , Microsoft Windows and BeOS are represented metaphorically.

Neal Stephenson's novel Anathem is influenced by the ideas of the Long Now Foundation .

Reamde ( German  Error ) is an action novel that, similar to Cory Doctorow's novel For the Win, takes place against the backdrop of a fictional MMORPG . In Reamde , however, computer games and equipment only serve as a loose framework for an action characterized by detailed action scenes. Unlike his novels such as Snow Crash or Diamond Age, the text hardly contains any visionary or science fiction elements.

Seveneves ( German  Amalthea ) describes the survival of mankind after the moon has broken and falls in pieces to the earth, making the earth's surface uninhabitable for thousands of years. Part of humanity is fleeing into space stations, part lives underground and part adapts to life underwater. Most of the novel deals with the almost complete (self) extinction of space refugees. The second part takes place thousands of years later and describes the beginnings of the return of space dwellers to earth and their contact with other groups of people (previously unknown to them). All three groups have grown apart socially and / or biologically.