Mac OS , also known retronymously as Mac OS Classic or Classic Mac OS - in German classic Mac OS - is the original operating system of the Macintosh from Apple , which was developed since 1982 and marketed since 1984. In the beginning it only had the very unspecific name System until it was called Macintosh System Software for the first time in its entirety in System Version 4.0 from January 1987 . This designation was then officially used for versions 5 and 6 until it was simply called System again at the beginning of the 1990s: System 6 and System 7 . Starting with version 7.6 it was renamed to Mac OS . After Xerox Star and Lisa OS, the operating system was the third commercially available operating system that had a graphical user interface and supported a mouse . The central element is the finder modeled on a desk , which up to System 6 had its own version number.

As of May 2001, all new Macs were shipped with Mac OS 9 and Mac OS X, and Mac OS 9 remained the preinstalled standard operating system until January 2002.

In order to save expensive main memory and scarce disk space, essential parts of the operating system were initially stored in read-only memory ( ROM ). This made space-saving and nevertheless powerful programs possible: The first word processing program MacWrite was less than 30 kB in size and still had a graphic surface, several windows and offered WYSIWYG . Also MacPaint for drawing was so small.

Initially, only one program could run at a time; From 1987 the MultiFinder , from 1991 System 7 , made it possible to run several programs at the same time. System 7 was already a 32-bit operating system.

Towards the end of the 1990s, the disadvantages of the classic Mac OS compared to real multi-user systems such as Solaris , Linux , BSD or Windows NT became apparent . The multitasking capabilities were not completely controlled by the system (so-called cooperative multitasking ), so that, together with the lack of memory protection, the system could completely crash if a single program triggered an error and no longer responded.

To compensate for these deficits, Apple tried to develop a more modern operating system under the project name Copland . The project failed, but some of the innovations from Copland were integrated into the existing "system", which was also renamed Mac OS . Mac OS 7.6 already received parts from Copland, Mac OS 8 also came up with the revised Copland surface "Platinum". In Mac OS 8.5 , core functions from Copland were taken over, so that Mac OS 8.5 has a completely revised kernel that is even multi-processor capable. However, none of these modifications were able to remedy the core deficits, among other things because the operating system should remain compatible with the Macintosh API at the program interface (API) level.

Apple therefore started looking for alternatives. Among other things, it was considered to buy the company Be Incorporated in order to use their BeOS operating system, which is under development, but which is already stable and mature, as the basis for the new Macintosh operating system. However, the project failed - there are many rumors about the reasons.

Ultimately, Apple bought NeXT, founded by its former CEO Steve Jobs , for almost 400 million US dollars, in order to create a completely new operating system called " Mac OS X " based on OPENSTEP (originally NeXTStep) with the help of Steve Jobs. to develop.

Mac OS 9 continued to be supported in the Classic environment up to Mac OS X Tiger (up to April 10th, 2007) in order to make it easier for users to switch, who could continue to use their old programs. However , the Classic environment no longer ran on Macs with an Intel processor (from 2006) and Mac OS X Leopard (10.5, 2007, last version that ran on the PowerPC); here you have to rely on third-party programs such as SheepShaver .

The name "Mac OS" is first mentioned in the start logo of System 7.5.1 ; with version 7.6 the operating system is officially called “ Mac OS 7.6 ”. Macintosh operating systems were called “Macintosh System Software” up to System 6 , but then the original term “System” was increasingly used again - as was the case with System 7, System 7.1 and System 7.5. The last version of Mac OS in its original form is Mac OS 9.2.2, dated December 2001. 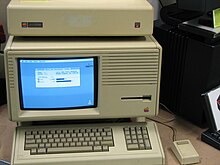 Versions up to Macintosh System Software 5

The version listed as system software up to version 5.0 is that of the print on the media. It cannot be read on a running Macintosh. As of “Macintosh System Software 6” ( System 6 ), the versions are largely standardized (except for the subversion of the Finder) and in System 7 they are completely standardized. System 7.5 was the last operating system for classic Macintosh computers from the 1980s. Starting with version 7.6, System 7 was also renamed Mac OS 7.6.

System 7 , released in 1991, represented a complete overhaul and modernization of the existing operating system for Apple on the one hand, and on the other hand it also marked a dead point in development, as Apple was unable to integrate modern operating system functions such as multitasking and memory protection in a stable manner. Projects to develop a modern new operating system - "Pink" or TalOS , "Red" or Raptor, Copland and Gershwin - remained unfinished or were already stopped in the planning phase.

Apple therefore looked for a successor operating system from another manufacturer. Finally, NeXT was taken over at the end of 1996 and its modern Unix operating system OPENSTEP was further developed in Mac OS X by 2001 , with the programming interface of the Macintosh being re-implemented as Carbon . Carbon was also available on Mac OS version 8.1, so "carbonized Programs" ( English "carbonized applications" ) were also able to run on both Mac OS X and Mac OS.

Version 7.6 was renamed Mac OS 7.6 because System 7 could also run on Macintosh clones and the name was intended to indicate the Macintosh PCs produced by Apple itself , even if the system was running on one of the clones. Mac OS 7.6 was also the first Mac OS to receive parts of the unfinished Copland .

The last Macintosh that can start Mac OS 9 directly is the Power Mac G4 "Mirrored Drive Doors 2003", which was reissued from 2003 to 2004 following requests from users. On newer PowerPC-based Mac models, Mac OS version 9.1 or higher can only be used in the Classic environment of the successor operating system Mac OS X to Tiger (10.4, 2005; last update 10.4.11, 2007), but not on the server -Models Xserve . The Classic environment is no longer available on Intel-based Macs and is therefore no longer an official (virtualized) classic Mac OS.