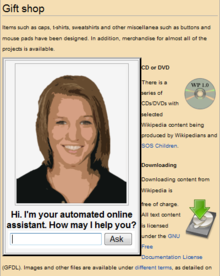 The avatar of an online assistant on a website 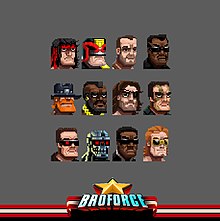 Avatars in the computer game Broforce

An avatar (noun, masculine; the avatar) is an artificial person or a graphic figure that is assigned to an Internet user in the virtual world , for example in a computer game . In an instant messenger , especially the old AOL service, one spoke of a buddy icon (“buddy symbol”).

The word is derived from Sanskrit . There अवतार ( Avatāra ) means "descent", which refers to the descent of a deity into earthly spheres. The term is mainly used in Hinduism for the incarnations of Vishnu .

Avatars have the shape of a picture, icon or a 3D figure and show people, animals or fantasy beings. The term avatar was popularized by Neal Stephenson in his 1992 science fiction novel Snow Crash . In the epilogue he claims that he invented the term for this book, as well as "Metaversum" - but that was just a marketing gag. A fantastic figure with the function of “role reversal” was “Avatar” in the story of the same name by Théophile Gautier from 1857. In 1953 Giacinto Scelsi wrote his “Quattro Illustrazioni”, four illustrations or illuminations about the metamorphoses of Vishnu, the individual parts of which he wrote Titled "Avatars".

In Internet forums and social networks, the graphic figure assigned to a user is called an avatar. It can be uploaded by forum users or selected from a list and serves as a visual identification figure that is displayed next to their contributions to the discussion.

The term avatar is often used to describe intelligent software that users can use to communicate in natural language. They advise and support the user not only on the Internet, but also in communication with technical systems (human-machine interface). The primary goal is to increase user-friendliness through dialog-based systems. Examples of this are avatars as digital contacts in vehicle navigation (e.g. VW Tiguan or Mercedes F700 ) as well as kiosk solutions or so-called interactive shop windows.

However, an avatar is often more than a static image. Interactions can be graphically represented based on 3D real-time engines. In addition to simple game sequences in which the user guides the artificial figure through worlds (e.g. World of Warcraft , Second Life ), solutions in audiovisual communication are particularly in demand. In the game Ultima , the term was already used in 1985 for the player's virtual representative. Avatar video chats, video services and virtual substitutes are development topics. Different avatar portals, where users can design their individual personalities and use them in different ways, offer a wide range of solutions and services.

At the start of the 2020 CES technology fair, Samsung announced plans for its “Neon” project, which is intended to greatly simplify the manufacture of avatars. Realistic-looking avatars that can be controlled completely interactively should be able to be calculated from existing video material. In addition, the avatars should be completely configurable by the user down to every bone and muscle.

A gravatar is a globally available Avatar ( Globally Recognized Avatar ) connected to the e-mail address is linked to the user. Various sites offer users the option to upload avatars to their servers and link them to their e-mail addresses. A user of the Internet can leave his global avatar in any blog or other system without having to register with each blog and then uploading a picture. There are plug-ins for many blog systems or other Internet offerings that make it easier to integrate such small images, which are normally 80 × 80 pixels in size.

But there is also criticism of gravatars. By using it for different Internet activities, the operator of the service is able to create a comprehensive user profile for the user, which the provider can use for advertising purposes, for example. Investigative authorities can also easily gain comprehensive insight into the activities of the user.