Example of the look of an internet forum 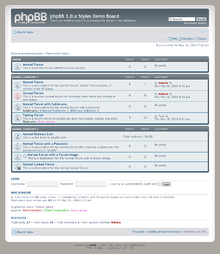 Example of an internet forum created with phpBB

An Internet forum (from the Latin. Forum, marketplace), and web forum, discussion forum computer forum, online forum or bulletin board, is a virtual space for the exchange and archiving of thoughts , opinions and experiences . Communication in forums is asynchronous , which means that a contribution is not answered immediately and immediately, but with a time delay.

Usually a forum website has a certain main topic and is subdivided in such a way that there is a separate directory for each of the sub-topics, a sub-forum. You can write contributions to discussions (English. Postings ) that others can read and answer. All contiguous contributions are referred to as a thread or topic . By starting a new thread, you start a new discussion.

Help forums are particularly popular on the Internet, where users can get advice on a specific topic. Help is offered that can be the only help with special problems and only a few other sources of information. User forums are helpful, e.g. As well as for hardware and especially software because these by user or maker user posts quickly and widely over shortcomings of their products - for software bugs are informed and able to react - (programming error).

In some forums, everyday problems, but also current topics from politics or world events are discussed.

Crossposting , which involves posting the same posts multiple times in different web forums that usually deal with the same topic, as well as advertising, is often undesirable . Links to other websites, for example to display sources or further information, are usually allowed.

According to the type of operator, Internet forums can be divided into the following groups:

The largely prefabricated forum software makes it easy for website operators to set up and run their own forums these days. In contrast to the early days of development, programming skills are often no longer required for ongoing operations .

In recent times in particular, there have been legal disputes concerning the forum operator's duty to monitor user postings and avatars and their legality ( liability for interference ).

With the development of the Internet, discussion forums have become an important means of communication for sharing knowledge or, very often, for entertainment. Over time, unwritten but also often written discussion norms and rules have emerged, which are constantly changing and whose meaning and validity are assessed very differently.

There are various technical approaches to realizing an Internet forum in Internet communication . The palette ranges from the grandfather of all Internet forums, Usenet, to the exchange of e-mails via a special forum server ( mailing lists ) to the modern web forums on the World Wide Web .

Usenet was developed in the 1980s and is based on decentralized cooperating servers to which messages ( postings ) can be sent, which are then available in a newsgroup (topic group) for all subscribers of this group.

Before the proliferation of the World Wide Web, there were numerous Telnet forums, some of which still exist. Due to the protocol used, they are only operated using text commands and only reproduce pure text.

A web forum is an Internet forum on a website, i.e. part of the World Wide Web. Web forums have largely replaced most other forms of Internet forums. Until the early 2000s, many web forums and the open Usenet could be used without registration. Since then, most web forums require mandatory registration, which means that members form an online community . Many forums offer registered users the opportunity to “subscribe” to topics (threads), that is, to be notified by e-mail when a new post has been made there. Other functions offered by many web forums are calendars with members' birthdays, member rating systems, signatures, integration of multimedia elements or small user images (avatars).

According to the structure of the posts, forums can be divided into two types: "Classic" forums and (bulletin) boards .

Similarities and differences between forums and boards

Both forums and boards have a main page on which you can see an overview of the topics in the forum / board and users can create new threads of discussion (also called threads or topics ).

On the other hand, forums and boards differ in the following points:

Advantages and disadvantages of the classic web forum

The classic forums represent the relationships between the contributions within a topic in the form of a tree. A hierarchical structure is created through which one recognizes which contribution was made in response to which other contribution. Each contribution to the discussion is loaded on a separate page. However, the threads themselves are sorted chronologically according to their creation date, i.e. linearly.

Many users, especially from IT, find the tree structure and the direct accessibility and assignability of the posts in a forum very pleasant. An auxiliary syntax to establish a reference to a previous post, as in boards (@participant XYZ, ...) is unnecessary, the course of a discussion always remains recognizable. The fact that the overview page is always sorted in the same way is seen as an advantage.

Advantages and disadvantages of the (bulletin) boards

A bulletin board lists all topics on its overview page with the title of the first post of the topic. All postings of a topic are then displayed chronologically on one page ("flat" post structure). After an adjustable number of contributions, the topic is broken up on a following page. The advantage of the "flat" structure is a lower retrieval time. The disadvantage is the poor clarity with extensive topics when different discussions develop on a topic and it is not immediately apparent to which contribution a discussion participant is responding.

Many users consider sorting the overview page by activity to be an advantage. This sorting moves topics of increased interest and participation to the highest position.

Often the term board is also used to denote discussion platforms with a (thematically and numerically) wide number of topic-specific forums.

Web forums with a linear, activity-oriented display - i.e. bulletin boards - have largely replaced the classic forums with a tree structure.

In the opinion of some web users, this is due to the sorting of the topics and the community building through membership.

Hybrid boards / forums also exist. The SELFHTML forum system, for example, is largely configurable and can be set up virtually continuously - and individually for each user - between the board and the forum in terms of sorting and display.

The forum software is ready-made packages with different scope of services.

Depending on the size of the board, configurable privileges of individual users are useful or practically necessary for administrative organization and for conducting the discussion. Two frequently set up user groups, which are characterized by their typical privileges, are called moderators and administrators .

Moderators can control the discussion. You can delete or change posts. They can also often decide on access rights or block users. In most cases, they can also close discussions, i.e. prevent a thread from being expanded to include new discussion contributions, or move discussions that have been placed in the wrong category by forum users. Moderators are committed users who do not necessarily have to have a personal or economic relationship with the operator of the forum, but who, from the operator's point of view, have qualified for this role. For example, through outstanding specialist knowledge or a moderating contribution style that reduces conflicts between users. In contrast to an administrator, you can usually not change any settings in the forum software and have no access to the technical platform of the website, but only operate the forum software .

As with wiki and other public, collaborative systems, users cause problems, partly because of the online disinhibition effect , who write inappropriate, memory-wasting posts ( spam ) or insult other members. Forum operators prevent such unpleasant behavior through forum rules, in which the rules of conduct applicable to the forum are specified. In forums in which unregistered users are also allowed to post, the risk of misleading reports as well as purely provocative contributions, so-called trolling , is sometimes high.

The problem here is the anonymity of the digital conversation and the resulting lack of consequences in the event of misconduct: In a direct conversation, moral, social and personal interests and influences prevent us from actually expressing intended expressions and opinions - not least because of fear the possible reaction.

There are two types of moderated forums: Some moderated forums save all user contributions immediately, but do not publish them until they are approved by the board administration / moderation. In the other way, posts are to be read immediately after posting. A board administrator / moderator observes the forum operation and accesses z. B. in the case of insults and spam postings by editing or deleting the relevant posts. Depending on the forum software, the user can no longer edit or delete a posted post. However, it is a technical setting and has nothing to do with the function of a moderator as a person.

In an unmoderated forum, the forum operator only provides the technical infrastructure; however, there are no moderators to intervene in the discussions if necessary. This favors the posting of insults, spam, etc., but such forums also offer the opportunity to exchange ideas on extremely explosive and polarizing topics. In moderated forums, such threads are often deleted or blocked by the moderation. At the heyday of the New Economy around the turn of the millennium, there were still many completely unmoderated forums; now hardly any more.

In most countries, the legal opinion has prevailed that, in addition to the authors of contributions, the operators of Internet forums can also be made liable for content, provided they are aware of the content. Since there is no general obligation to check in advance in Germany or in most other countries, in case of doubt, knowledge can only be obtained with a complaint at the latest. A period of 24 hours has been established as the deadline within which the forum operator must respond in order not to be held liable.