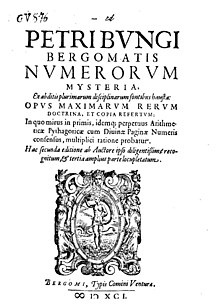 Number symbolism (also: number mysticism or numerology ) is understood to mean the assignment of meanings to individual numbers or combinations of numbers, whereby the numbers are given a symbolic function that goes beyond their mathematical function. This symbolism, with differences in form and function, is observed in religion , liturgy , literature , customs and superstition and also plays a role in research into historical forms of music , architecture , medicine , art and law .

In contrast to the mathematical understanding of numbers, in which numbers have purely formal functions, number mysticism assigns additional meanings to certain numbers . In customs, mysticism and religion, figures charged with significance appear as symbols , as metaphors or in the structure of rites ( e.g. oracles ) or buildings. These numbers have a specific character, an individual quality and properties, such as “male”, “female”, “auspicious” or “holy”, which can vary depending on the culture. Often, value judgments about things are also transferred to numbers linked to them or, conversely, value judgments about numbers to things linked to them.

Almost all number-symbolic systems consider the single-digit numbers from one to seven as well as ten. This is likely to be due to the phases of the moon and the resulting cultural conventions such as the seven days of the week . The number ten is also fundamental to the decimal system , based on the ten-fingered hand.

Number symbolism is common in numerous cultures and religions worldwide. The first and comprehensive system of occidental numerology on the basis of symbolic Bible exegesis was developed by Pietro Bongo in the late 16th century .

There are numerous numerology systems that give certain letters in the alphabet a numerical value. Examples of this are the Abdschad , the Hebrew numeral and the Armenian numeral .

The Jewish tradition of interpreting words based on their numerical values ​​is called gematria . The Arabic system of numerology is the Abdjad . In this system, each letter of the Arabic alphabet has a specific value.

Some theories in alchemy can be traced back to numerological principles. For example, the Iranian alchemist Jābir ibn Hayyān based his experiments on a specially developed numerological system based on the names of the substances used in Arabic.

Scientific theories are often referred to as "numerology" when the original purpose of the study is based on a number of patterns rather than based on scientific observation. This slang usage of the term is widespread in scientific commentaries and is mainly used to reject a theory or a scientific publication as doubtful.

The best known example of numerology in science is the Large Number Hypothesis , which was established by Paul Dirac in 1937 . This is a theory that deals with the strange accumulation of absolute ratios on the order of 10 40 . Other personalities, such as the mathematician Hermann Weyl and the astronomer Arthur Stanley Eddington , also dealt with the hypothesis .

The discovery of atomic triads, which dealt with the elements of a group or column of the periodic table , has been called a form of numerology that eventually led to the creation of the periodic table. In these triads, the average atomic weight of the lightest and heaviest element of a group is calculated, which then roughly corresponds to the atomic weight of the middle element. Although this method does not work with every triplet, some subsequent scientific work has been based on this observation.

Methods in games that allow the use of "lucky numbers" (lottery, bingo, roulette, etc.) correspond to the concept of numerology. While no strategy can be used that will increase the player's chances of winning, they can bet on "lucky numbers" that they believe will help. Although there is no evidence that such a numerological strategy would have a better result than randomly setting any numbers, such methods for increasing the motivation to bet are widely supported by casino operators.

Isidore of Seville already emphasized the cognitive value of number symbolism for theology in his Etymologiae :

The importance of the numbers is not to be sniffed at. For in many places in the scriptures it becomes clear what a great mystery they contain. For it is not for nothing that the praises of God say: "You have made everything according to measure and number and weight." The number six, which is perfect by its divisors , indicates the perfection of the world (created in six days) through its numerical meaning. In the same way, the forty days fasted by Moses , Elias and the Lord Himself cannot be understood without knowing the numbers. There are other numbers in the holy scriptures whose improper meaning can only be interpreted by those familiar with this subject. (Isid. Orig. 3.4.1)

It is still true today that the exegesis and analysis of historical and religious texts is hardly possible without an understanding of numerical symbols.

The other sciences that deal with number symbolism include linguistics (numbers as semantically relevant objects) and cultural studies (numbers in customs , rites and superstitions ). In addition, esoteric practices of number symbolic oracle technique under the term numerology with regard to their social and psychological effects on the individual and society can be an object of social and cultural science interest.

With scientific methods, number-symbolic (numerological) practices, for example for the purpose of fortune-telling or to gain occult knowledge, cannot be checked and, because of their wide scope for interpretation, cannot be falsified . In doing so, they evade scientific judgment. Followers of the natural sciences therefore assign numerological practices to the area of superstition and generally rate them as erroneous beliefs.

This is also used against claims that symbolic numerical relationships faithfully reproduce natural conditions (crystallography, vegetation forms), as well as against hypotheses that assume a hidden number symbolism in buildings such as the Great Pyramid and link archaeological findings with astrophysical and geophysical conditions in their argumentation.

Number symbolism in the Bible

The Bible of the Old and New Testaments contains an abundance of numerical data which, according to the doctrine of the fourfold sense of the Scriptures, have been intensively interpreted literally and allegorically in the history of the Bible . Numbers that appear in both the Old and the New Testament are often typologically interpreted as predicting the later Christian sense. Thus, the four four-faced and four-winged beings in the vision of Ezekiel (in Ezekiel 1,4  EU ) have been interpreted as types of the four evangelists at the latest since Jerome .

Numbers play a role in the apocalyptic writings in particular , as they are perceived as systematizing and making the world order clearer. The origin of biblical-apocalyptic number symbolism can be seen in the Babylonian number speculation.

For ancient oriental religions such as B. in Babylon , numbers have a mystical meaning. Certain numbers correspond to the influence of the stars and constellations

The symbolism of numbers also plays a central role in ancient and modern China . The 3 as the basis of numerous triads, the five, the eight, and finally the 12 as the determinant of the calendar and the zodiac are of particular importance .

The 4 ( Chinese  四 , Pinyin sì ) is the unlucky number because in Chinese it sounds similar to “to die” and “death” ( Chinese  死 , Pinyin sǐ ). Other unlucky numbers are 7 and 10. Therefore, the numbers 4, 7 and 10 are avoided or replaced as much as possible in China and Japan.

In the East Asian region there is an interpretation that z. B. has been incorporated into the holistic building biology there according to the Feng Shui theory. Related topics here include the Yin and Yang- based view of the world.

The numbers nine and nineteen have a special meaning for the Baha'i .

In fairy tales, numbers are represented as symbols with a magical meaning. The numbers 3, 7 and 13 have particularly prominent meanings as they bring luck or bad luck to the main characters. Something only works on the third attempt, as in Little Red Riding Hood, or the thirteenth fairy utters a curse. For example, the fairy tale Cinderella speaks of three dresses and three evenings. On the third evening, she loses her shoe, which brings her luck. However, other numbers are also common in fairy tales. The 12, for example, often occurs in fairy tales, but is given a more neutral position, as a 13th person is added at the end or something similar. Proverbs are often repeated, which often happens 2 or 4 times. In Rapunzel, for example, the phrase "Rapunzel, Rapunzel, let your hair down" is repeated 4 times.

The conversion of words into numerical values ​​is also part of the number symbolism. For this purpose, numerical values ​​are assigned to individual letters, which then result in result numbers according to various calculation methods, which usually include the formation of the checksum .

The meaning of these result numbers is taken from tables that recall the meanings of the tarot .

Methods for calculating the number of names are widely used by Cheiro and Reichstein .

Similar to the daily horoscope, there are also assignments of numerical values ​​to calendar days.

In the United States even today people avoid naming a 13th floor. Instead, it is numbered, for example, with "12A" or with 14. It is similar in airplanes or on cruise ships, where there are no 13th row of seats or no 13th deck. Rooms with the number 13 are also dispensed with in hospitals and hotels, and car number 13 in Formula 1 motorsport (but not on the 13th starting place). In Wellington , the capital of New Zealand , government offices are often on the 13th floor because they are not rentable to business people; they apparently have concerns that such an address could be detrimental to business. Some conspiracy theorists attach great importance to numbers, such as twenty-three . In esoteric circles there are also theories about symmetrical numbers ( 11:11 phenomenon ), which from a scientific point of view most closely belongs to the field of selective perception . The Weihenstephaner Bräustüberl in Freising is called "Lecture Hall 13" by students of the Technical University of Munich. On campus Freising-Weihenstephan officially no auditorium exists with the number thirteen.

Writings from followers of number symbolism