This article is about the Mesopotamian goddess Ištar. For the Arabic unit of weight, see Istār .

Ištar , Sumerian Inanna ( Sumerogram : d MÙŠ), is the Akkadian name of a deity worshiped in Mesopotamia . Many different attributes and numerous temple structures have been ascribed to her. The Ištar Gate in the walls of Babylon gained particular fame through its reconstruction in the Pergamon Museum ( Berlin ).

The planet Venus is assigned to this deity . She was worshiped as a goddess of (sexual) desire as well as a god of war . She was considered the daughter of Sin and sister of Šamaš . Some consider her to be the most difficult goddess of the Sumerian and Akkadian pantheons to grasp because of her diverse and complex shape, for others Ištar represents a paradox because - according to today's understanding - she combines opposing characteristics in the same person. 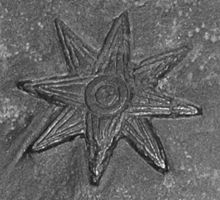 Star symbol of the Ištar from a kudurru of Meli-Šipak

The ancient orientalist Claus Wilcke traces the Akkadian name Ištar back to the common Semitic name ʻAṯtar . The plural form ištaratu by name denotes the concept of femininity. 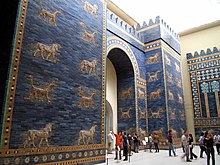 Ishtar Gate in the Pergamon Museum in Berlin

Detailed view of a lion, symbol of the goddess Ishtar, on the processional route to the Ishtar gate

Ištar was the most important Babylonian goddess . She was revered as both morning and evening stars . Ištar can occur in male and female forms. Its symbolic animal is the lion, and one of its epithets is therefore labbatu (lioness). Another animal associated with Ištar is the jackal. A hymn proclaims: “You are a jackal hunting lambs!” Their divine servants were Ninatta, Kulitta , Sintal-irti and [H] amrazunna, their “last” servants Ali, Halzari, Taruwi and Sinanda-dukarni.

In the Vorderasiatisches Museum ( Pergamonmuseum ) in Berlin , you can visit the Ishtar Gate , one of the gates of Babylon, with the processional street that runs towards it. Its walls are decorated with 60 lions, symbolic animals of the Ištar, on each side.

In Assyria , too , Ištar was one of the most important goddesses as Ištar-Aššuritu. She was considered the founder of Nineveh and the wife of Aššur . Ištar already had an important temple in Aššur in ancient Assyrian times .

Ištar's symbol is the eight-pointed star. She is often depicted standing on a lion. As the goddess of war, she is portrayed as bearded, often with a sickle sword in her hand. As the goddess of sexual desire, she holds up her robe ("rope jumping goddess") or holds her breasts with her hands.

An unfinished Neo-Babylonian limestone relief shows Ištar on a lion. She wears a sickle sword in one hand, a ring and staff as a symbol of the king in the other and has a tall, cylindrical cap on her head.

The Ištarhymnus Šu-illa (like all Mesopotamian hymns and epics under its opening line) is most completely documented in a neo-Babylonian version from Uruk . In addition to the actual prayer text, the traditional version contains instructions on how and with which rituals it is to be performed.

From Boğazköy a cuneiform tablet is known which contains a text from the middle of the 2nd millennium, which is perhaps a forerunner of the hymn Šu-illa .

In it Ištar is called the goddess of all goddesses , the mistress of all houses , the leader of the human race , who is greater than all other gods. May her word be strong and her name be strong. As the heavenly daughter of Sin, she illuminates heaven and earth. Anu , Enlil and Ea have given her great power. She carries weapons and arranges the order of battle, she is the wisest of the great gods ( igigu ). She is the star of the battle cry and can turn brother against brother, friend against friend. Let her be the mistress of battle and throw herself against the mountains. If her name is mentioned, heaven and earth would tremble. All people would revere her name, her cult was nowhere unknown. It decides with justice, it looks with grace on the oppressed and abused and let justice be done to them. She run fast, she hold the reins of kings and open the veils of women. She is the shining torch of heaven and earth, the light of all dwellings, the fire that shines against the enemy. With her grace the dying would get well again if the sick rose again, whoever was treated unfairly would find prosperity when he saw her. She is the goddess of men and women. Her heart is a raging lion, her mind a wild bull. May the believer pray that Ištar's wild disposition would calm down, that she would look upon him with constant grace, that her sweet breath would blow him, that he would walk in her light and that she would keep him alive.

Another cuneiform tablet from Bogazköy describes a household to which Ištar is gracious: "The residents of the household do their work with laughter, they happily look after their house. The young wives live in harmony and weave tirelessly, the sons of the house live in harmony and plowing the field morning after morning. In a household that is not gracious to Ištar, housework is done with groans and suffering. The young brides quarrel, they no longer weave in harmony, but one pulls the other by the hair. The brothers are enemies, and they no longer plow morning after morning of the field, the grain is no longer ground [..] just as the pig cannot get along with the dog [..] "(the rest poorly preserved). 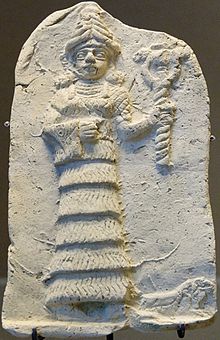 Wiktor Pelewin takes up the ishtar myth in his novel " Generation P " (1999). In his novel The Ship of Ishtar, Abraham Merritt transported a modern person into the Akkadian world of gods.

In addition, the goddess Ištar appears in the horror film Blood Feast by Herschell Gordon Lewis , which was the first splatter film ever to be released in 1963 and was continued by the same director in 2002 with Blood Feast 2 - All You Can Eat . In the films, an Egyptian caterer kills young women for a feast to bring the goddess Ištar back to life.

In 1987, a film called Ishtar was made with Dustin Hoffman , Warren Beatty , Haluk Bilginer and Isabelle Adjani in the leading roles . It received extremely bad reviews and could not bring in its production costs by far.

The goddess also found its way into the visual arts : Ištar's role in the history of women was made clear by the feminist artist Judy Chicago : In her work The Dinner Party, she dedicated one of the 39 place settings at the table.

Metal band Otep opens their song Unveiled from the album Smash The Control Machine with an invocation of Ištar (and other goddesses); the rest of the text revolves around the themes of war and sexuality in a religious and feminist context.

The second smaller continent on the planet Venus was named Ištar Terra .