Dustin Lee Hoffman (born August 8, 1937 in Los Angeles , California ) is an American actor and, among other things, a multiple Golden Globe award winner. For his roles in the dramas Kramer versus Kramer and Rain Man , he won an Oscar for best leading actor . He has been one of the leading character actors in American films since the mid-1970s .

Dustin Hoffman, named by his mother after the silent film actor Dustin Farnum , originally wanted to be a pianist and studied music at Santa Monica City College . In 1956 he broke off his education and took acting classes at the Pasadena Playhouse . "I started acting because I got to know girls," the actor later confessed. At the Pasadena Playhouse, Hoffman met Gene Hackman , with whom he has been good friends since that time. In 1958 he moved to New York City and continued his acting studies at the renowned Actors Studio . For a time he shared an apartment with Gene Hackman and Robert Duvall . During this time, the three actors had great difficulty getting roles. "Until I was 31, I lived below the official American poverty line," Hoffman said later.

Dustin Hoffman got his first stage role in the play Yes Is For a Very Young Man by Gertrude Stein . In 1961 he made his Broadway debut with Steven Gethers' A Cook for Mr. General . For his portrayal in The Journey of the Fifth Horse by Ronald Ribman he received an Obie Award in 1964 , for Farce, Eh? a Theater World Award and the Drama Desk Award . Hoffman then played minor television roles and made his Hollywood debut in 1967. In the same year he made his international breakthrough with his second film, The Graduation .

Dustin Hoffman was married to Anne Byrne, a dancer, from 1969 to 1980, with whom he has a daughter and who brought another daughter into the marriage. Two weeks after his divorce, he married the lawyer Lisa Gottsegen, who was 17 years his junior. The couple have two sons and two daughters. Of his six children, four are also active, including Jake Hoffman and Max Hoffman . 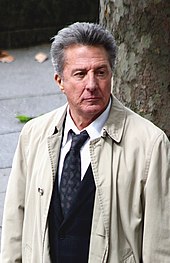 Dustin Hoffman while filming Love at Second Sight in London (2008)

In 1967, the previously unknown Dustin Hoffman received the lead role in Mike Nichols ' film The Graduate ( The Graduate ), leading to a worldwide success and a classic of the New Hollywood was -Kinos. In the role of college graduate Benjamin Braddock, he is seduced by Mrs. Robinson ( Anne Bancroft ), who is twice his age, but falls in love with her daughter. As a sympathetic antihero , Hoffman met the lifestyle of young movie-goers and became the star of a new, unglamorous generation of actors whose protagonists no longer corresponded to the classic ideal of the Hollywood star, but instead attached importance to realistic representations. Hoffman received an Oscar nomination for the role.

After the final exam , Hoffman was seen in various roles and films. He acquired the reputation of a versatile perfectionist who did not shy away from any challenge and meticulously prepared for his portrayals. Hoffman was already 30 years old when filming The Graduation , but very credibly played a twenty-year-old. In the social drama Asphalt-Cowboy in 1969 he played the terminally ill street thug Ratso Rizzo alongside Jon Voight and received his second Oscar nomination for it. In the comedic anti-western Little Big Man (1970) he was seen as a veteran of the Indian wars and portrayed the protagonist Jack Crabb in the lifespan of 17 to 120 years. Hoffman became emaciated for the role of the convict Louis Dega in the prison drama Papillon 1973 almost to the bone.

In 1974 Hoffman played the entertainer Lenny Bruce , who was known for his provocative appearances, in the biopic Lenny by Bob Fosse and in 1976 the journalist Carl Bernstein alongside Robert Redford as Bob Woodward in the Watergate drama The Untouchables . In the same year he played in the thriller The Marathon Man by John Schlesinger, a Jewish student and marathon runner in New York who is involved in secret service intrigue over a Nazi criminal. In the most famous scene of this film, Hoffman is brutally tortured with a dental drill by the former concentration camp doctor Szell ( Laurence Olivier ). In 1978, in the hour of probation, he played a paroled criminal who relapses. This film was so close to his heart that he took on both production and directing duties for it. In 1980 Hoffman received his first Oscar for his role as a single father in the divorce drama Kramer vs. Kramer . The film sparked a social debate about custody .

1982 Hoffman was with critics and audiences with the travesty - comedy Tootsie scored a major success: In Sydney Pollack's film, he played an unemployed actor who disguises himself as a woman to get a commitment. Hoffman was nominated for an Oscar for it, but lost to Ben Kingsley for his impersonation of Gandhi in Richard Attenborough 's film adaptation of the same name . In the mid-1980s, Hoffman starred in Arthur Miller's drama Death of a Salesman on Broadway. Volker Schlöndorff then adapted the piece for his television film of the same name , which was shown in German cinemas. Hoffman received his second Oscar in 1989 for his portrayal of a gifted autistic in Rain Man . The actor made only five films in the 1980s, including the 1987 highly-budgeted comedy Ishtar directed by Elaine May alongside Warren Beatty , which became one of the biggest box-office flops of the decade.

From the late 1980s, Dustin Hoffman appeared frequently in more commercially oriented genre films such as Family Business (1989), Hook (1991), Outbreak - Silent Killer (1995) or Sphere (1998). In 1996 he founded his own production company Punch Productions , with which he supports and promotes independent projects. One of his first projects was the satire Wag the Dog (1997) with Robert De Niro, based loosely on the satire of the same name by Larry Beinhart , in which the American president fakes a war in the media in order to distract from a love affair. Hoffman, who complained of a lack of good scripts, did not make another film between 1999 and 2002.

He first appeared in front of the camera in 2003 with his long-time friend Gene Hackman in the John Grisham film The Judgment . Two years later, alongside Robert De Niro and Barbra Streisand , he had a great success with the comedy My Wife, Her In-Laws and I. In 2006, he took on the role of perfumer Giuseppe Baldini in the film adaptation of Patrick Süskind's German bestseller Das Parfum - The Story of a Murderer . In 2011 he first appeared in a television series production, in the HBO drama Luck . In it he embodied a highly intelligent gambler who wants to make big money with horse betting after his stay in prison. The series was discontinued early in 2012 after the first season after three horses were previously killed on the set.

Kung Fu Panda , which waspresented to the German presson June 23, 2008 in the Shaolin Temple Germany in Berlin , is so far the only animated film in which Hoffman has participated. As in the first part, he took over the voice of Master Shifu in the respective sequels.

Dustin Hoffman was nominated seven times for an Oscar between 1968 and 1998 and received the award in 1980 and 1989. In 1999 the American Film Institute honored him for his outstanding life's work with the AFI Life Achievement Award . Over the course of his career, the character actor has received many international awards. At the end of February 2009 Hoffman was appointed Commandeur des Arts et Lettres , the highest level of the French cultural order. In the same year he was elected to the American Academy of Arts and Sciences .

In a 1979 interview with Time Magazine , actress Meryl Streep accused Dustin Hoffman of touching her chest while auditioning for a role in a play.

In 2017, the writer Anna Graham Hunter accused him of having sexually molested her and of having inappropriately talked about sex in front of her. This happened while filming Death of a Salesman , where Hunter was an intern. Hunter was only 17 at the time and Hoffman was already 47. Hunter wrote in the Hollywood Reporter : “When I asked him what he wanted for breakfast, he said, 'Hard boiled eggs and soft boiled clitoris'. Nobody has ever said anything so gross to me. I just turned around and ran into the bathroom to cry. "

In 1997 Hoffman, of Jewish faith (he comes from an Ashkenazi Romanian-Ukrainian family), was one of the signatories of an open letter to Federal Chancellor Helmut Kohl , in which the behavior of the German state towards the Scientology sect was compared with the persecution of Jews in the Third Reich . The letter was printed in the International Herald Tribune and caused great outrage in Germany.

as the best young actor

as Best Actor - Comedy or Musical

as the best newcomer

as Best Actor - Comedy or Musical

In the 1960s and 1970s it was dubbed by Manfred Schott . However, he died in a traffic accident in 1982. Between 1982 and 1991 Hoffman was dubbed by Michael Brennicke in Tootsie , Ishtar , Family Business , Billy Bathgate , Otto Sander in Death of a Salesman , Joachim Tennstedt in Rain Man , Arne Elsholtz in Dick Tracy and Jan Odle in Terror im Parquet . Joachim Kerzel has been his standard voice since Hook (1991) .