This article is about the musician. For the song of the same name see Barbra Streisand (song) . 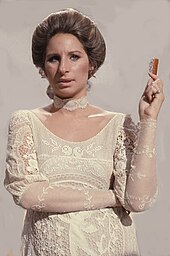 Barbra Streisand (* 24. April 1942 as Barbara Joan Streisand in New York City ) is an American singer , actress and director . Streisand, who started out as a musical actress, is one of the world's most successful singers with over 145 million records sold.

Since her breakthrough with the lead role in the film Funny Girl (1968), she has also been counted among the stars of New Hollywood and was later able to establish herself with her own film productions and directing work. She has received several Grammy Awards for her musical achievements, she has also won the Oscar for Best Actress (Funny Girl) and for Best Movie Song ( Evergreen from A Star Is Born ) as well as several Emmys , Golden Globe Awards and a Special Tony Award . She is the only artist to land at number 1 on the US charts with at least one album each for six consecutive decades .

Barbra Streisand was born into a Jewish family in the Williamsburg neighborhood of Brooklyn . Her father Emanuel Streisand was a primary school teacher and died when she was 15 months old. Her mother Diana Ida Rosen was a school secretary and had a son, Sheldon Streisand, with her first husband. Her mother married Louis Kind when Barbra Streisand was seven years old. From this marriage comes Streisand's half-sister Roslyn Kind , who also became an actress, singer and songwriter . Streisand's paternal grandparents came from Galicia . A childhood friend was the future world chess champion Bobby Fischer , who also attended Erasmus Hall High School in Flatbush .

On December 29, 1955, 13-year-old Barbra Streisand recorded two songs for a demo tape. One of the recordings was You'll Never Know . In the fall of 1957 she was an Honors Student (student with very good grades) in her class. She sang in the school choir with Neil Diamond ; However, both did not get to know each other personally until many years later during their duo You Don't Bring Me Flowers together and are still friends today.

As a teenager, Streisand performed as a nightclub singer. Because she actually wanted to be an actress, she played in the musical Driftwood and several other summer theater productions (Summer stock) . She gained her first stage experience in 1958 when she appeared in three plays at the Clinton Theater.

In 1961 she made her first television appearance on the Tonight Show . She signed her first record deal in 1962 with Columbia Records . Other guest appearances on television followed, for example in the Judy Garland Show in 1963, where she sang Happy Days Are Here Again and Judy Garland Get Happy . Both songs were arranged in a duet by Garland. After these successes, she released her second album in the fall of 1963 with The Second Barbra Streisand Album . With her first album The Barbra Streisand Album , she won two Grammys in 1964. From 1961 she also got engagements on Broadway . She played her first role in the musical I Can Get It For You Wholesale, another in 1964 as Fanny Brice in the musical Funny Girl .

Her first record successes and the hit on Broadway with Funny Girl brought her a multi-year television contract with the television company CBS , which produced TV specials with her until the late 1960s. The highlight of these shows was the live recording of a concert in New York's Central Park in front of 300,000 spectators with free admission. She won the Oscar for best actress in 1969 for Funny Girl , a film adaptation of the musical of the same name. In 1970, Streisand received a Special Tony Award for her Broadway career in the previous decade.

After Streisand became known in the 1960s with artistic and very successful songs from Broadway musicals and interpretations in the field of traditional pop and jazz standards , she switched to the album What About Today? for the first time in a contemporary musical direction under the influence of soft rock and mass and youth culture. In the 1970s and early 1980s she was one of the most important pop singers with her distinctive, always somewhat dramatic singing style, with a repertoire of numerous ballads, some of them from film soundtracks. Starting with the album Lazy Afternoon (1975), she also repeatedly recorded songs in the disco style that was popular at the time. This culminated in the number one success No More Tears (Enough Is Enough) , a duet with the then "Queen of Disco", Donna Summer .

She received a second Oscar in 1977 for her composition Evergreen for the film A Star Is Born . She was the first woman to receive this award. In the same year she was immortalized with a star on the Hollywood Walk of Fame . Between 1970 and 1980 she received the prestigious AGVA Georgie Award from the Association of American Variety Artists for her achievements on the music stage.

In 1980 Streisand's most commercially successful pop album Guilty was released , which was produced by the Bee Gees and from which the world hit Woman in Love was released. It was only with The Broadway Album in 1985 that she returned to her musical roots when she recorded some of his most beautiful musicals under the direction of Stephen Sondheim . The album became a best seller and brought her again in 1987 the Grammy Award for Best Female Pop Vocal Performance.

In total, she released more than sixty albums, including her film soundtracks, for which she was awarded over 50 golds, over 30 platinum and more than 18 multi-platinum records, putting her in second place in the all-time charts the Beatles and the Rolling Stones and is only surpassed by Elvis Presley .

In the summer of 2007 Streisand went on a concert tour in continental Europe for the first time, with stops in Zurich , Vienna , Paris , Berlin , Manchester , Dublin and London . In 2012, Streisand went on her back-to-Brooklyn tour in the USA . This took her to Europe again in 2013, with stations in London, Amsterdam , Cologne , Berlin and Tel Aviv .

Streisand has directed several films, such as Yentl , where she worked as a producer, director, screenwriter and leading actress. Dealing with the in Yentl themed Judaism runs like a thread through Streisand works. She also founded the Barwoods Films production company in 1972 , which she uses to produce her own films. With Barwoods she produced Yentl, Nuts… Crazy , Lord of the Tides and Love has two faces with great success. She celebrated a resounding success in 1972 in the female lead in the film Is' was, Doc? directed by Peter Bogdanovich and starring Ryan O'Neal .

In her first films she was mostly dubbed by Sabine Eggerth ; from the 1980s until her death, Dagmar Heller was her permanent German voice. 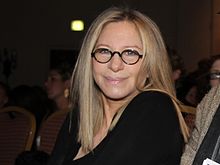 From 1963 to 1971 Streisand was married to actor Elliott Gould , with whom they have their son Jason Gould . This can be seen as a supporting actor in Streisand's film Lord of the Tides . In 1998 she married the actor James Brolin . Her trademarks are her light silver look and her big nose. She refused a nose operation because she feared that it would affect her voice.

Streisand has been involved in numerous charity projects with the Streisand Foundation since 1986 . Streisand has always stood up for the US Liberal Democratic Party . For this reason, in 1971, she was part of Republican President Richard Nixon's list of enemies .

Streisand is often mentioned in the animated series South Park , in the episode "Robo Streisand" of the first season she is even a main character. She was a recurring theme in the sitcom The Nanny , where she was referred to as a great role model for the main character portrayed by Fran Drescher , as well as in Glee , where Rachel Berry names her as one of her idols. Streisand is also mentioned in films like In & Out or Fear and Loathing in Las Vegas .

In the music video for the song Barbra Streisand by the band Duck Sauce , she is portrayed by an actress.

Barbra Streisand is also responsible for naming the Streisand effect , which is used to describe the media phenomenon that the attempt to suppress information first makes it known to a larger audience.

In 2016 she was appointed chairman of a committee for an arts center at Ground Zero in Manhattan, which is to consist of three halls in a building cube.

1962: Best Supporting Actress in a Musical (I Can Get It for You Wholesale)

1974: Silver Rose for "Barbra Streisand and other Musical Instruments"
1986: Producer award for "One Voice"

1970: Special Tony Award as "Actress of the Decade"