The title of this article is ambiguous. Further meanings are listed under Bryan Adams (disambiguation) .

Bryan Guy Adams , OC , OBC (born November 5, 1959 in Kingston , Ontario ) is a Canadian rock singer , guitarist , composer and photographer . Since 1983 it has reached number one positions in the charts in over 30 countries. In the 40 or so years of his career, he has sold more than 100 million records.

Adams was born in Canada in 1959 to British parents. His father Conrad J. Adams was active in the military diplomatic service, his mother Elisabeth Jane Watson worked as a teacher and librarian. Because of the father's job, the family often had to change their place of residence; for example, they lived in Israel and Austria and from 1967 to 1971 in Portugal . The parents separated in the mid-1970s. Bryan Adams moved to Ottawa with his mother and two years younger brother, and a little later to Vancouver . In addition to English, he also speaks French .

Adams has been a vegetarian since the late 1980s and is now also a vegan . He supports the animal rights organization PETA . In an interview with Brigitte magazine , he said: “Since I've stopped eating meat, I've never had any infection, not even a cold. It works. It really works. "

Adams lives with his partner and two daughters, born in 2011 and 2013, in the London borough of Chelsea . In 2013, Adams bought an old workshop in the Oberschöneweide district of Berlin to open studios for himself and artist friends. In November 2016 it was announced that Adams was selling a large part of the studios again.

In Vancouver , Adams devoted himself very intensively to his music. He left high school at the age of 15 to perform at night in town clubs with bands like Shock and Sweeny Todd. With Sweeny Todd he recorded the LP If Wishes Were Horses… Then Beggars Would Ride as lead singer in 1977 , which was re-released in 2004 under the title Bryan Adams - The Early Years, supplemented by two more songs from this period. In 1978 he left the band.

Adams also met the musician Jim Vallance in Vancouver in the late 1970s . Both began a collaboration as songwriters, which continues to this day. They wrote songs for various Canadian rock musicians, for example Loverboy and Bachman-Turner Overdrive . They also wrote songs for Bonnie Tyler , Ian Lloyd and Kiss . In 1978 Adams and Vallance produced some demo tapes and sent them to record labels. Some of these demos have appeared on Adams' studio albums over the years, such as I'm Ready , which was released on Cuts Like a Knife in 1983 .

In 1979 Adams got a recording contract with A&M Records. In the spring of 1980 he released his first album Bryan Adams , which was not a commercial success and did not hit the charts. A year later, the album You Want It, You Got It was released , which made it into the US charts.

In 1982 Adams went on tour with the Kinks , Loverboy and Foreigner , for which he played in the opening act. Adams had his commercial breakthrough in 1983 with the album Cuts Like a Knife , which entered the top ten of the album charts in both Canada and the USA. The first single was Straight from the Heart , a ballad . In the same year Adams made his first appearance in Europe on the television show Rockpalast .

The hard rock of the first albums gave way in November 1984 at the latest with the album Reckless, mostly AOR - or mainstream-oriented songs and ballads. Although the single Run to You was still very guitar-driven, Adams established himself in mid-1985 with the single Heaven as the “master of the radio-suitable rock ballad”. Adams' rough voice "seems made for rock ballads" . Run to You was the first single to make it into the top ten of the BBC charts and make Adams known in Europe. A total of four more singles were released from Reckless in the course of 1985. These are Summer of '69 , Somebody , One Night Love Affair, and It's Only Love . The latter was a duet with Tina Turner , who accompanied Adams on her 1985 world tour in the opening act.

In the spring of 1987 the album Into the Fire was released , which reached the top 10 on both sides of the Atlantic, but did not come close to this standard commercially compared to its predecessor. In 1988 the live album Live! Live! Live! which, however, was not a great commercial success and only stayed in the charts for a short time.

1990–1999: Comeback with film scores and collaborations

Bryan Adams at the presentation of the LeadAward (2006; pictured with Jörg Thadeusz )

In the summer of 1991, Adams reported back with the album Waking up the Neighbors . The single (Everything I Do) I Do It for You was used as the theme song for the film Robin Hood - King of Thieves . From July 13, 1991 to November 1, 1991 the single was number one on the UK charts without a break. No single had achieved this before Adams' release in the nearly forty-year history of the UK charts. The song was also number one in the US charts for seven weeks and also reached number 1 in Germany, Australia and numerous other countries. The success of the single brought Adams back commercial success. The accompanying album, Waking up the Neighbors , also became a worldwide bestseller, taking first place in the UK and Germany.

Then Adams embarked on an extensive world tour that lasted over a year. During this time, other single releases of the album became hits: the guitar rocker Can't Stop This Thing We Started reached number 2 in the US charts, the power ballad Do I Have to Say the Words came up to number 11. In Great Britain was above all that Mid-tempo song Thought I Died and Gone to Heaven (Top 10) successful.

In the fall of 1993, Adams released the compilation So Far So Good , which also became number 1 worldwide. With Please Forgive Me , the best-of record also contained a brand new title that, when released as a single, became another number 1 hit in Australia and a top 3 success on both sides of the Atlantic. The song was again a powerful power ballad with a guitar solo. He also released the single All for Love from the film The Three Musketeers with Sting and Rod Stewart , another large-scale ballad that became another number 1 hit in early 1994.

With the participation of the Spanish flamenco guitarist Paco de Lucía , Adams recorded another film music in the spring of 1995, the ballad Have You Ever Really Loved a Woman? for the film Don Juan DeMarco , another US number 1 hit and a top 3 worldwide hit. In mid-1996, after five years, a new studio album was released: 18 Til I Die reached the top of the British charts and had two more UK top hits with the rock song The Only Thing That Looks Good on Me Is You and the ballad Let's Make a Night to Remember 10 singles. In contrast to the USA, the album was also a great success in Germany and Australia.

Since 2000: more records and successes

In the late summer of 2004, Adams' album Room Service was released , which reached number 1 in the German album charts in the first week after its release. The first single, Open Road , reached the German Top 20 and the second single, the Ballade Flying , was used as background music for ski jumping broadcasts on television. In late 2005, Adams released his third greatest hits album, Anthology . In March 2008 his album 11 was released ; the first single was I Thought I'd Seen Everything . For the Disney film Old Dogs , which started in January 2010, Adams contributed the title track You've Been a Friend to Me . In the official music video, Adams played and directed all of the musicians.

On February 12, 2010 the title One World, One Flame , which Bryan Adams wrote for ARD and its broadcast of the 2010 Winter Olympics in Vancouver , was published. At the official opening ceremony of the Winter Olympics, Adams performed with his Canadian music colleague Nelly Furtado . Both of them sang the song Bang the Drum composed by Adams , which was also released on the Sounds of Vancouver 2010: Opening Ceremony Commemorative Album .

The album Get Up was released in October 2015 . It was produced by Jeff Lynne and contains nine new songs and four acoustic versions. For the video for the single Brand New Day , he worked with Helena Bonham Carter and Theo Hutchcraft .

With Shine a Light he released a new studio album in March 2019, on which Jennifer Lopez and Ed Sheeran also participated. In December 2019 he released a Christmas EP with five songs, including two new songs. A music video for Joe And Mary was released in November 2019, and for Christmas Time , a song from 1985, in December 2019.

Collaboration with other musicians

Adams worked with many other well-known musicians in his career. In addition to Sting, Rod Stewart and Tina Turner, he also sang with Barbra Streisand , Ronan Keating , Ex- Spice-Girl Mel C , Celine Dion , Stanfour and others. a. 1990 Adams came in Berlin on Potsdamer Platz at The Wall on.

Adams wrote the songs for the animated film Spirit - The Wild Mustang . He also worked on the music for the film In the racing stable, the zebra is going on with. Adams participated in the music project Chicane by Nick Bracegirdle with, their album Behind the Sun , he from 2000 to singing with the hit single Do not Give Up took with electronically distorted voice and also happen to be the most photos for the CD booklet provided (see #photographic work ). In return, Bracegirdle mixed Adams' single Cloud Number Nine .

Since the early 1980s, the band around Adams, who not only takes on the vocals but also the rhythm guitar , has consisted of lead guitarist Keith Scott and drummer Mickey Curry . Bassist Dave Taylor was a permanent member of the band until the end of the 1990s . The keyboardist Tommy Mandel belonged starting from 1981 studio cast and played from the end of the 1980s, even at concerts.

Adams is also active as a photographer and has received several awards for his work in this area. In 2006 he received the LeadAward for a photo series . His voluntary pictures of numerous celebrities (see #Social Engagement ) were shown in New York and Berlin in the summer of 2008. He later also photographed the Commonwealth chief Queen Elizabeth II.

A central, political oeuvre in his photographic work is the cycle Wounded - The Legacy of War , created between 2010 and 2013, with portraits of young British soldiers who had returned home from Iraq or Afghanistan severely damaged by the war. It was only after several exhibitions of these photos in Germany in 2014 at the NRW Forum Düsseldorf , the Kunsthalle Mainz , the Stadthaus Ulm and the Photokina in Cologne that they were shown for the first time in Great Britain at Somerset House London at the turn of the year 2014/2015.

He is co-editor of Zoo Magazine , a magazine for photography that he founded in Berlin in 2004. 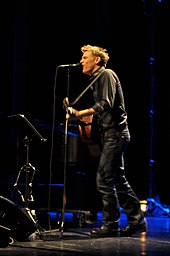 Adam's concert proceeds went to the His Royal Highness the Prince of Wales Prince's Trust , Live Aid and the Concert for Freedom for Nelson Mandela , among others . He played for Greenpeace and Amnesty International and in the service of many other humanitarian campaigns, for example for saving the rainforest, freeing political prisoners, saving whales, relieving hunger and distress of the needy and on many other occasions. In 2004 he performed at Canada's benefit concert for the victims of the Indian Ocean tsunami .

Since 2007 he has been an "Ambassador of Good Hearing" and photographed some well-known stars free of charge for the Hear the World Foundation , including Harry Belafonte , Joss Stone , Annie Lennox , Amy Winehouse , Rod Stewart and Mick Jagger .

After the earthquake and tsunami in Japan in March 2011, he called on musicians and singers around the world to play a benefit concert for Japan together.

Adams also set up his own foundation, the Bryan Adams Foundation, which looks after people in need around the world.