Statue at the Bambi Awards in Berlin, 2013

The Bambi (proper spelling: BAMBI ) is conferred annually in Germany Media - and Television Award of Hubert Burda Media . The company is honoring people who, in its view, “have visions and creativity, whose outstanding successes and achievements were reflected in the media in the past year”. The jury regularly consists of the editors-in-chief of the Burda Group and external experts from various areas of society. 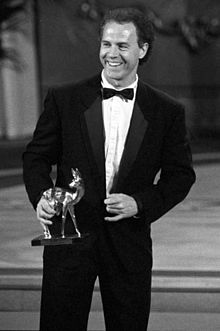 Franz Beckenbauer was honored in 1990 with the Sport Bambi Prize for his intuition and perfection, with which he led the German national team to the World Cup as team leader.

In 1948 the commander in chief of the French occupation troops in Germany and at the same time military governor of the French occupation zone also headed the Neue Verlag-Gesellschaft ; on October 7, 1947 he set Carl Opitz (1937 head of public relations at UFA) as a trustee for the UFA film assets in the French zone and donated the Bambi award. (In 1953, the publisher Karl Fritz , who in 1938 had Aryanized the paper wholesaler and paper goods factory Akademiestraße Gebrüder Bauer oHG ( Mannheim ) as publishing director in Karlsruhe with Franz Burda , took over the Neue Verlagsgesellschaft including Bambi.)

According to another version, the Bambi was "brought into being in 1948 by the Karlsruhe entrepreneur Karl Fritz, who published the popular magazine Film-Revue and the industry journal Die neue Filmwoche ".

It is one of the oldest German media awards. Karl Fritz's company (and thus Bambi) was taken over by Burda-Verlag in 1962/63. The first Bambi winners in the “Most Popular Actor” category were Marika Rökk and Stewart Granger . In addition, four films received awards in 1948: in the category of “most artistically valuable films”, Marriage in the Shadow and Children of Olympus, and in the “most popular films” category, Madonna of the Seven Moons and Untitled Film .

According to statements by Marika Rökk's daughter Gabriele Jacoby , the figure owes its name to Bambi, because when her mother received the award at home, she said: “Oh, that looks like a Bambi!” Apparently the then four-year-old was inspired by Felix Salten's book Bambi. A life story from the forest . The film award, which was unnamed in the first year, was awarded from 1949 under the name "Bambi".

The award was initially for a fawn made of white ceramic , which had been created in the state majolica factory in Karlsruhe by the sculptor Else Bach in 1936. Karl Fritz discovered it for his film award. The art foundry Ernst Strassacker in the Swabian town of Süßen has been producing the deer in gold-plated bronze since 1958 . Record winners are Heinz Rühmann (12), Peter Alexander , OW Fischer and Johannes Heesters (10), Sophia Loren (9) and Maria Schell (8).

The Bambi was a pure film award until the award year 1967 and a combined film and television award in 1968/69. In 1970 it was awarded a television prize and from 1975 onwards again included the field of film. In 1984 the Bambi was finally given the more general award as it is known today, namely an award "for the best in film, television, sport and society".

Up to the year 1969, Film Bambis were awarded in two departments:

For the TV Bambis from the award year 1968 onwards there were no fixed, annually repeated categories, but some that occurred frequently:

Since 1984, some new categories have appeared outside of the film and television sectors:

In 1984 the proportion of categories outside of the television and film sectors was around a fifth and increased to a good half by 2009; since 2010 it has been around two thirds (see the corresponding articles).

In November 2011, the Hannoversche Allgemeine Zeitung called for the Bambi award ceremony to be abolished and justified this with the words: "Always the same award winners, unnecessary 'scandals', arbitrary categories, reduced relevance." The same applies to the Golden Camera and the Germans Television award .

The award of the Bambi Integration Prize to the rapper Bushido in November 2011 was heavily criticized from various sides. The Hessian SPD chairman Thorsten Schäfer-Gümbel said that Bushido stands for hostility to women and gays and that one can hardly speak of an integration achievement if someone stands out on the back of others. A few days after the controversial Bambi award, the folk singer Heino returned the award he had been given in 1990 with the following reason: “I am deeply indignant that a violent criminal like Bushido is given the Bambi. I do not want to be put on the same level with this man. ” About a month after the award ceremony, the laudator Peter Maffay also criticized Bushido for having“ unfortunately not followed his words with deeds ”, and ended the collaboration with him and Sido . Before that, the three were guests on the show Markus Lanz , which had heated arguments with other guests and the presenter.