In 1968 the Pflaumes parents moved with him and his brother Ralph from Leuna to Leipzig . After High School at the Leipzig Max Klinger School made plum 1985-1987 on complaints the military service of the National People's Army , and then began at the Technical University of Magdeburg , a computer science degree . He escaped from the GDR in the fall of 1989 on Budapest in the Federal Republic of Germany , where he worked in Frankfurt a training for securities traders made. Pflaume eventually went into business for himself ; he organized and moderated events.

Kai Pflaume has been married to his wife Ilke since August 10, 1996, with whom he has two sons. The family lives in Grünwald near Munich .

He is the great-grandson of the architect Hermann Eberhard Pflaume , great-great-great-nephew of the secret building councilor Hermann Otto Pflaume and a relative of the city judge Johann Caspar Pflaume , who come from a family in Aschersleben .

Plum appeared in 1991 as a candidate in the ARD television program Herzblatt , moderated by Rudi Carrell . In 1993 he was discovered as a presenter after a casting and began his television career on the RTL show Nur die Liebe sucht (since 1995 on Sat.1 ).

Kai Pflaume has hosted numerous shows and live events on Sat.1 since 1996: Die Glücksspirale , Revenge is Sweet , The Comedy Trap , Stars at the Limit , The LEGO Show , Dreams come true , Germany helps - donations for the victims of the flood disaster or The chance of your life .

Pflaume has been a partner in Promikativ GmbH in Offenbach am Main since 1999 . The company specializes in marketing and referring celebrities for advertising.

For the casting show Star Search in the summer of 2003 Kai Pflaume received a Bambi .

Together with his colleague Stefan Raab , he also moderated events for the ProSieben broadcaster , the second TV total high diving and the first two Wok World Championships . In the 2006/2007 season he hosted the live broadcasts of the UEFA Cup on Sat.1 .

In 2004 he played the role of 'Frozone' in the animated film The Incredibles .

His first format on ARD was the Star Quiz with Kai Pflaume . Since the summer of 2011, he has also hosted the Saturday evening show Small versus Large - The Unbelievable Duel and That’s Great ! , a new edition of the show Dalli Dalli on NDR . Since autumn 2011, ARD has broadcast two other formats with Kai Pflaume. In the evening program on Friday he presented the family quiz three at Kai . In addition, the show Der klügste Deutsche 2011 was broadcast.

At the beginning of 2013 he presented Barbara Schöneberger on the NDR Talk Show together with Hubertus Meyer-Burckhardt . Since July 2014 he moderated the NDR television , the rate of transmission to believe! and since 2015 the evening show Who knows something? in the first.

In June 2013, the four-part report series Show me your world was broadcast on ARD , in which young people with Down syndrome share their everyday life with Pflaume. For this he received the Bavarian Television Award in 2014 as host and discussion partner of this series . 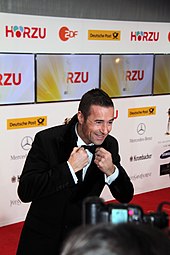 Plum is missing the foremost link on his right index finger after he trapped it in a door as a two-year-old.