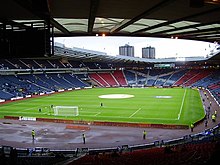 The 2006/07 UEFA Cup was the 36th edition of the competition and was won by Sevilla FC through a success on penalties against Espanyol Barcelona in the first all-Spanish final at Hampden Park in Glasgow . Sevilla was able to defend its title from the previous year and was the second club to succeed after Real Madrid in 1985 and 1986 .

All clubs that had occupied one of the UEFA Cup places regulated by the UEFA five-year ranking at the end of last season were eligible to participate . In the event of a tie, the number of goals scored away was decided first , then overtime, if no decision was reached after 15 minutes twice, a penalty shoot-out followed until the winner was determined. What was new this season was that eleven clubs instead of three previously qualified for the second qualifying round instead of the previous first round via the UEFA Intertoto Cup . In the sixteenth finals, the eight thirds of the Champions League group stage joined the field of participants as usual .

If two or more teams were tied, a decision was made according to the following criteria:

1 The game was interrupted in the 79th minute when the score was 3-0 for over 20 minutes after the police used tear gas to stop the riots in the Feyenoord fan block.

Werder Bremen , Spartak Moscow , Girondins Bordeaux , Shakhtar Donetsk , Steaua Bucharest , Benfica Lisbon , CSKA Moscow and AEK Athens qualified for the round of 32 when they were third in the group stage of the 2006/07 UEFA Champions League .

2 Feyenoord Rotterdam wasdisqualifiedby UEFA because of the rioting on 30 November in the away game against AS Nancy. As a result, Tottenham automatically reached the second round.