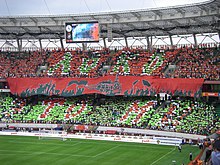 The team was founded on August 1, 1923 as "KOR" (Club of the October Revolution ) by the strongest footballers on the Soviet railway from the Moscow area. In 1935 the "KOR" was converted into a voluntary sports club of railroad workers and renamed "Lokomotive". This team no longer represented the whole area of ​​Moscow, but belonged to the city itself. From then on, the team consisted of the best players of the "KOR".

Lokomotiv Moscow played the first competitive game in the football championship of the Soviet Union on May 22, 1936 against Dynamo Leningrad . In the same year, Lokomotiv also won the first edition of the Soviet Cup when Dinamo Tbilisi was defeated 2-0 in the final. In 1945, right after the end of the Second World War , Lokomotiv had to accept the first descent into the second-class Pervaya League . 1957 the renewed cup success was celebrated (1-0 in the final against Spartak Moscow ). The team had the most successful season in 1959 when the runner-up behind Dynamo Moscow was fought. It was the only season in which the club finished in the top three in the final table. Altogether, Lokomotiv had to cope with the descent into the second class seven times in its history.

After the collapse of the Soviet Union, FK Lokomotiv Moscow was one of the founding members of the newly created Russian Supreme League . Up until 2000, places in the top third of the table were always occupied. In the 1995, 1999 and 2000 seasons, the team won the runner-up. 1994 and 1998 the third place in the table was reached. The worst performance is the sixth place in the table from the 1996 season. Three cup wins (1996, 1997 and 2000) also come from this period. The club's head coach was Yuri Sjomin , who moved to Lokomotiv in 1986 and stayed there for 19 years.

2001 the fourth win of the Russian Cup was celebrated and the second place was again occupied with four points behind Spartak Moscow at the end of the season. In the Russian Cup 2001/02, the team was eliminated in the 1/16 finals against FK Elista . In the third qualifying round for the 2001/02 UEFA Champions League , FC Tirol Innsbruck was defeated. In the group stage they finished third behind Real Madrid , AS Roma and ahead of RSC Anderlecht . This got them into the third round of the 2001/02 UEFA Cup , where they were defeated Hapoel Tel Aviv .

In 2002 the first championship title was won and the long-standing hegemony of Spartak Moscow was broken. Since Lokomotiv and CSKA Moscow were tied at the top of the table at the end of the season, a playoff for the championship was held. On November 21, 2002 Lokomotiv Moscow won 1-0 (6 min; Dmitri Loskow ) in the Dynamo Stadium and thus secured the championship title. In the 2002/03 Cup, however, the team was eliminated in the second round against Anzhi Makhachkala after a 1-0 defeat.

In the following year , the club reached only fourth place in the Russian championship. In the quarter-finals of the 2003/04 Cup, the team had to admit defeat to Schinnik Yaroslavl . In the third qualifying round for the 2002/03 UEFA Champions League , the Austrian representative Grazer AK was defeated first. Then Lokomotive survived the first group stage as second in the table against FC Barcelona , FC Bruges and Galatasaray Istanbul . In the second group phase, the team was against the eventual cup winners AC Milan , Real Madrid and Borussia Dortmund with only one draw and five defeats without any chance of progressing.

In 2004 Lokomotiv celebrated the second Russian championship title when the defending champion and local rival CSKA Moscow was able to collect one point less. In the end, Lok won. Moscow 2-0 in the away game against Schinnik Yaroslavl . The team was kicked out of the 2004/05 cup competition in the 1/16 finals of Chernomorets Novorossiysk .

The 2005 season ended with third place. In the 2005/06 Cup, the team did not get beyond the quarter-finals, where Spartak Moscow proved to be a stronger team. At the end of the 2006 season , as in the previous year, third place was achieved. However, the Russian Cup was won in 2006/07 when they defeated FK Moscow 1-0 in the final. At the end of 2006, the former coach Yuri Sjomin was signed as the new president. The new coach was Anatoly Byschowez . In 2007 , Lokomotive took the disappointing seventh place, so that both (Syomin and Byschowez) had been dismissed. In the 2007/08 Cup, the 1/16 final was the final destination after a 0-1 away defeat against Urals Sverdlovsk Oblast . The next season in 2008 ended the club with Raschid Rachimow as head coach again in seventh place, whereupon he had to leave. In the 2008/09 cup, Lokomotive made it to the quarter-finals, where it had to admit defeat to eventual cup winners CSKA Moscow 1-0. In May 2009, Yuri Sjomin returned to Lokomotiv as head coach. In the 2009 season, the team finished fourth in the table. In the Russian Cup 2009/10, the team was eliminated in the round of 32 against SKA-Energia Khabarovsk after a 1: 2 away defeat. After the fifth place in the table in the 2010 season , the coach Yuri Sjomin was released again.

For the 2012/13 season the Croat Slaven Bilić succeeded the Portuguese José Couceiro , whose contract as head coach had not been extended. Already on June 17, 2013, after only one season in Moscow, in which the ninth place was achieved the worst placement in the Russian Premjer League, Bilić dissolved his contract. He was then replaced by Leonid Kutschuk , who also had to leave on September 15, 2014.

Lok won the first title after eight years in 2015 when they won the national cup competition when they fought a 3-1 win after extra time against FK Kuban Krasnodar in the final game in the Astrakhan Central Stadium . Lok won this title for the sixth time. The team was thus directly qualified for the group stage of the 2015/16 UEFA Europa League . With Sporting Lisboa , Beşiktaş Istanbul and KF Skënderbeu Korça , Lokomotiv completed the group H of the competition and moved into the round of 32 as the first in the table, where they were eliminated by Fenerbahçe Istanbul . In August 2016, Yuri Sjomin returned to Lokomotive as head coach.

Loko won his seventh Russian Cup on May 2, 2017. It was defeated in the final Ural Oblast Sverdlovsk 2-0 in the Olympic Stadium in Sochi . As a result, Lokomotiv took part in the group stage of the 2017/18 UEFA Europa League . In Group F, Moscow met FC Copenhagen , Sheriff Tiraspol and FC Fastav Zlín and reached the round of 32 as the first in the table, where OGC Nice were defeated. In the round of 16, the railway workers were eliminated by Atlético Madrid .

On May 5, 2018 Loko won 1-0 at home against Zenit St. Petersburg and thus secured the third Russian championship title. The team thus took part in the 2018/19 UEFA Champions League . The club was eliminated from the competition after the group stage against FC Porto , FC Schalke 04 and Galatasaray Istanbul with only one win out of five defeats as bottom of the table.

The main sponsor of the association is the State Railway Company of Russia RŽD .

Lokomotiv Moscow in the European Cup