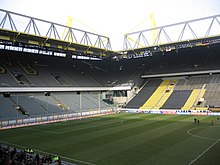 As a football stadium one is the stadium called that for football matches is used.

A football stadium is a stadium in the traditional sense that was built, among other things, to host football matches. This stadium can also be used for athletics competitions due to its career . Therefore, terms such as athletics stadium or athletics arena are not wrong in this context .

A “pure” football stadium is a stadium that is specially designed for holding football matches . In recent times the term “football arena” or just “arena” has been used more and more for this. The main difference between the football arena and other football stadiums is that it does not have a running track . Since the playing field dimensions are similar in many team sports, there are no noticeable differences in appearance between a football stadium and stadiums in which only rugby or American football is played. An example of this is the 1994 soccer World Cup in the USA , where many of the matches took place in typical "football arenas". Another example is the Millennium Stadium in Cardiff , Welsh , which is the home of the Wales rugby team and which served as the venue for the English Football Cup final for years during the construction of the Wembley Stadium .

In the middle of the stadium is the playing field with an adjacent running track or free-running zone. This area, which is usually between six and ten meters wide, houses the coaching bench and the photographers. The stands rise immediately adjacent . In a classic stadium, the course of the grandstands usually adapts to the running track and therefore results in the oval floor plan typical of classic football stadiums ( Olympic Stadium in Munich ). In a football arena, the grandstands are usually arranged completely or approximately in a rectangular shape around the square (e.g. Estadio Santiago Bernabéu ). In South America, on the other hand, many football arenas have a circular floor plan (e.g. Maracanã Stadium ).

The first football stadiums were built in Great Britain at the end of the 19th century . The oldest football stadium in Glasgow is Hampden Park , which was inaugurated on July 9, 1867. At that time, the grandstands were usually pure standing and consisted mainly of wood. As more than the permitted number of spectators often entered the stadium interior due to inadequate or missing safety measures, serious accidents occurred repeatedly, which were caused by the overcrowded grandstands (e.g. the Hillsborough disaster in 1989).

As a consequence of the spectator disaster in Sheffield (Hillsborough) , England , which on April 15, 1989 resulted in a total of 96 deaths and over 700 injuries, all football matches in the professional leagues in Great Britain have since only been allowed to take place in arenas with seats. Other European countries followed suit and also abolished the standing room in the football stadiums or reduced them significantly; not least because both FIFA and UEFA have adopted this rule for all international competitions. In contrast, stadiums in German-speaking countries continue to offer standing room at national matches. The UK is now thinking about introducing standing areas at national games. Celtic Glasgow is considered a pioneer here ; there the so-called safe standing was introduced in the Celtic Park . Here come Vario seats are used, which can be used thanks to folding seat and rail both as a seat and as a general admission.

The Letzigrund in Zurich as a classic multi-purpose stadium

Since many “classic” football stadiums are mainly used for football events and thus higher audience income can be achieved in the long term than at other sporting events, a development can now be observed in Europe away from the “athletics stadiums” towards the “football arena”. This trend has been reinforced by the recent World and European Championships .

In the mid-1990s, with the opening of the Amsterdam Arena, a new era for football stadiums in Europe was ushered in. This type of stadium embodied the new zeitgeist in football, which reflects the ongoing commercialization of this sport. In order to attract the more affluent audience in particular, separate boxes are available to increase comfort, which can be rented for a certain period of time. Although a larger number of normal spectator seats is ultimately lost for the box seats, the financial income can thus be increased. As a further measure to increase the attractiveness, a restaurant is integrated in a grandstand. In addition, the stadium has a mobile roof structure with which both the spectator areas and the playing field can be shielded if necessary. In order to be able to use the arena on days when there is no sport, it has been designed in such a way that the football stadium can be converted into a concert arena within a short time. The wide range of possible uses ensures that this building has a constant high occupancy rate and thus a high level of profitability . The lawn in modern arenas is considered a weak point. Like all lawns that grow under a roof structure, it does not thrive and needs to be renewed regularly. The main reason for this is the insufficient light intensity.

In the following years, further stadiums in this comfort class were built in Europe. The Volksparkstadion in Hamburg , the BayArena in Leverkusen and the Veltins-Arena in Gelsenkirchen are considered to be the first German football arenas . The latter not only has a lockable roof like the Amsterdam Arena, but also has a mobile playing field. This can be driven out of the building when there is no play, which not only frees the interior space for other uses, but also provides the lawn with “relaxation in the fresh air”, or regeneration for short.

Renaming of the stadium

The new construction or renovation of a stadium is usually associated with high economic costs. For this reason, many stadium operators have been using a lucrative source of income for several years by selling the stadium naming rights to financially strong companies. Although in many cases this makes economic maintenance of the stadium possible by the club or the municipality, this measure sometimes meets with reservations or rejection of the fans. The Hamburg Volkspark Stadium was sponsored by the AOL Arena , HSH Nordbank Arena and Imtech Arena between 2001 and 2015 . In the vernacular, however, the stadium was still known as the Volksparkstadion even at the time of the sponsored names . In the meantime, almost all Bundesliga clubs have marketed the name of their stadium. Counterexamples are the Berlin Olympic Stadium , the An der Alten Försterei stadium or the Borussia Park in Mönchengladbach .

The two Brazilian stadiums of Maracanã and Morumbi , which were once generally considered to be the largest football stadiums in the world, owe their reputation primarily to the fact that at that time most of the stands existed as standing room and there were hardly any access restrictions. This supposedly allowed up to 200,000 spectators to watch the games. In general, the number of visitors to important encounters around the world was significantly higher at that time. In various European countries it also happened that more than 100,000 spectators attended a game. Since the end of the 1980s, due to stricter safety regulations, began to build or refit stadiums that are purely seated and to increase access restrictions, the spectator capacity of the stadiums has decreased significantly.

Wembley in London is the second largest football stadium in Europe

The largest football stadiums in Europe are the Camp Nou in Barcelona (98,000 seats), the Wembley Stadium in London (90,000 seats), and the Luzhniki in Moscow (84,864 seats). While the first two stadiums mentioned are used as football arenas exclusively for ball games, the Moscow stadium, due to its history as a former Olympic stadium, had an additional athletics facility until 2018 .

Some countries, such as Germany and Switzerland, allow standing room at national football matches, which increases the number of spectators. The Westfalenstadion , which has the largest standing area in Europe, can accommodate the highest number of spectators of all German stadiums with a total of 81,365 seats.

Football stadiums nowadays have to meet strict requirements. This is intended to ensure the safety of the actors, spectators and staff on the one hand, and an orderly and safe course of the respective event on the other. The regulations for this primarily apply to the structure of the stadium interior, the size and division of the spectator areas, and the control of the technical facilities.

When it comes to the stadium interior, safety devices to protect the players and referees are given priority. This concerns, among other things, the definition of ditches or fences between the boundary of the playing field and the advertising board and the establishment of access routes to the playing field for rescue personnel.

The safety standards of the spectator areas primarily concern their quick and uncomplicated evacuation . This aspect includes, for example, the design of the individual stairways that separate the audience blocks from one another, as well as their exits. Most leagues require that there be a dedicated area for visiting fans to prevent fights between fans in the stadium. This area is usually separated from the rest of the spectator area by barriers such as fences and security guards.

According to Section 7, Paragraph 4, No. 1 of the Model Assembly Ordinance, a width of 1.20 m per 600 people is mandatory for escape routes for stadiums in Germany. This gives the rescue service quick access to the injured.

The diverse technical systems (wide-screen technology in the stadium, public viewing in high resolution, worldwide TV transmission, wireless communication between the referees, lighting, surveillance, public address, ...) must meet prescribed guidelines in terms of type, number and functionality. For example, FIFA requires data networks to be available at 99.999 percent - this corresponds to the criteria for high-performance data centers, since every interruption can lead to a loss of license and advertising income. For image transmission alone, Telekom Austria estimates that a total of two petabytes of data was transported during EURO 2008 .

Video surveillance plays a major role. It helps to identify dangers and unrest quickly, streams of spectators and the flow of traffic can be directed from a control station. The structured cabling makes it possible to integrate cameras into the data network of a stadium so that they can be linked, for example, with alarm and signaling systems, remote control, servers and backup or with the information system of the security forces.

Furthermore, in higher leagues and in international competitions, there are strict regulations for illumination by the floodlight system in order to ensure television transmissions in the highest quality and resolutions up to 4K .