The Celtic Football Club [ sɛltɪk ], in short: Celtic FC , in German-speaking countries mainly referred to as Celtic Glasgow , is a Scottish football club . The club has the official nickname "The Bhoys", its team plays their home games in green and white striped jerseys ("emerald green & white hoops") in the 60,411 places in Celtic Park (nickname: "Paradise") in the Bridgeton / Parkhead district . The club has dominated Scottish football  for over a century , along with local rivals Glasgow Rangers . The greatest success so far is winning the Big Triple in the1966/67 season as the first European club.

The club was founded on November 6, 1887 in St. Mary's Hall on East Rose Street by Brother Walfrid as the Celtic Football and Athletic Club . Brother Walfrid's motivation was to fight poverty in Glasgow's East End , which is largely inhabited by Irish immigrants . Shortly thereafter, a meadow was rented on Dalmarnock Street, on which the first game in a Celtic Park called venue was played on November 13, 1887 . Hibernian and Cowlairs separated 0-0. On May 28, 1888, the first own game was played: In a friendly game , the Glasgow Rangers were beaten 5-2. The first goal scorer was Neil McCallum. On August 21, 1888, the club joined the Glasgow and Scottish Football Association . In 1892 the team won the first Scottish Cup and has since played its home games in Glasgow's Parkhead district. The following year Celtic became champions for the first time, in 1902 they won the British League Cup with a 3-2 after extra time in the final against Glasgow Rangers.

Between 1905 and 1910 the national championship was won six times in a row. In 1907 and 1908, Celtic won the double - an achievement that no team had achieved in Scotland before. Another winning streak was set up between 1914 and 1917 with four championship titles in a row. In 1937, Celtic won the Scottish Cup in front of a record crowd of 146,433 spectators in Hampden Park . This is still the European club record. In 1938, Celtic surprisingly beat the huge favorites from England, Everton FC , in the Empire Exhibition Trophy .

In 1953, Celtic won the Coronation Cup in honor of Queen Elizabeth II's coronation and prevailed against representatives from across the kingdom. In 1957, Celtic successfully defended the Scottish League Cup by beating arch-rivals Glasgow Rangers 7-1 in the final . In 1964 , Celtic reached the semi-finals of the European Cup Winners' Cup . In 1966 they reached the semi-finals again, but failed at Liverpool FC .

In 1967 , with a win over Inter Milan , Celtic became the first British and non-southern European team to win the European Cup . This year the club won every trophy that was possible: European Champion Clubs' Cup, National Championship, National Cup, League Cup and Glasgow Cup. In 1970 Celtic was able to advance to the final again, but lost to Feyenoord Rotterdam after defeating the favorites Leeds United in the semifinals . The second leg in Hampden Park was watched by 133,961 spectators - a record for a European Cup game to date.

In 1994 the Canadian Fergus McCann took over the majority of the club and achieved the financial turnaround within five years . He had the outdated venue converted into the largest club stadium in Great Britain . McCann left Celtic - as announced when he took office - after five years and handed the scepter over to Allan MacDonald.

The year 2001 was one of the most successful ever in club history: Supported by 53 goals by Henrik Larsson , the Scottish triple was won. In 2003 Celtic reached the final of the UEFA Cup , but lost to FC Porto . Around 100,000 fans traveled to Seville to support their team, even though only a fraction of them had tickets. The supporters were awarded the UEFA Fairness Prize for their peaceful demeanor.

In the 9-0 success in the 2010/11 season on November 6, 2010 against FC Aberdeen , Celtic managed the highest victory in the Scottish Premier League , including three penalty goals. Gary Hooper and Anthony Stokes were the best shooters on coach Neil Lennon's team with three goals each .

Celtic has one of the most bitter rivalries in football with city rivals Glasgow Rangers . Celtic and the Rangers each represent different denominations (Catholics vs. Protestants), different national identities (Irish vs. British), and different social classes (workers vs. academics).

In contrast to the Rangers, who until 1989 only employed Protestant footballers, the Celtic players were mostly of Irish Catholic origin and the club was strongly integrated into the Catholic community in Scotland , but all players were welcome at Celtic from the start , regardless of their origin , cultural identity or religion. Another reason for this rivalry is the loyalty of the Rangers to the British Crown, which is a thorn in the side of the more Irish- oriented Celts. For example, the club colors green and white can be traced back to the national flag of Ireland, the Scottish flag (The Saltire) and the green, white and orange Irish flag are hoisted on the roof above the pitch , but never the British Union Jack . Socially, the Rangers represent the British-influenced upper class, while Celtic represents the Irish Catholic residents of some of the poorest neighborhoods in Western Europe. The local derby - The Old Firm  - is a symbolic religious, national and class struggle.

Celtic fans are known for their numerous and loud, but extremely peaceful support at home but also especially at away games. In 2003 the fans received the FIFA Fair Play Award for this . The most famous songs of the Celtic appendix are You'll Never Walk Alone and The Fields of Athenry . Also very popular are Hail, Hail, the Celts are here , Over and over - we will follow you , Just Can't Get Enough by Depeche Mode and the Ode to Willie Maley .

The club magazine The Celtic View has been published weekly for fans since 1965 .

With 57,900 spectators, Celtic has the third highest average attendance of all British clubs. On average in 2011, only Arsenal and Manchester United recorded higher visits. In a pan-European comparison, Celtic ranks twelfth here.

Top 10 after appearances and goals

Jock Stein was also a player at Celtic, but above all he went down in the club's annals as a coach. Under his aegis, Celtic won nine championship titles in a row (1966–1974) and the European Cup (1967). It was remarkable that all of the Celtic players who won the 1967 Cup final came from a radius of 40 kilometers around Glasgow. Jock Stein is still today the most successful Celtic trainer in history. It is also noteworthy that, despite his Protestant denomination, he enjoys the highest recognition in the Catholic association.

James Kelly was the first Celtic captain in the club's history. Willie and Jimmy McStay were brothers , Paul McStay their great-nephew . 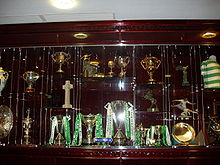 Trophies at the Celtic Park Stadium

Clubs in the Scottish Premiership 2019/20