McNeill grew up in a Catholic environment in Bellshill ( North Lanarkshire ), his ancestors come from Ireland and Lithuania .

He also led the Celtic team, which won the European Cup in 1967 , consequently became one of the Lisbon Lions and was the first British footballer to lift the European Cup into the sky. In 1975 he ended his playing career after playing for Celtic over 800 times. In the Scottish national team he had 29 appearances.

In April 1977 he began his coaching career at Clyde FC , but moved to Aberdeen FC in June . In 1978 he returned to Celtic, this time as a coach.

In the five years under McNeill, Celtic won the championship three times and once each the Scottish Cup and the Scottish League Cup . In 1983 he moved to England and coached Manchester City .

In the 1986/87 season he became one of the few coaches who had trained two relegated teams in the same season. He started the season with Manchester City but moved to Aston Villa in September 1986 . Both clubs were relegated this year.

In May 1987 he vacated the Aston Villa coaching chair for Graham Taylor after the team had arrived in the First Division table cellar. McNeill returned to Celtic.

In its first year back in Glasgow, the club celebrated its centenary and won the double, the Scottish Premier League and the Scottish Cup. In the following season he was able to defend the cup.

In 1991 he left the club after four years in the coaching bench in Celtic Park . He worked again as an interim trainer at Hibernian Edinburgh .

McNeill lived in Newton Mearns until his death in April 2019 . Most recently, he has recovered well from an injury-related leg surgery.

In December 2015, a bronze statue was unveiled in front of the stadium in his honor. He is the fourth person after Brother Walfrid , Jock Stein and Jimmy Johnstone to receive this honor.

McNeill, nicknamed Cesar , is arguably the best captain in Celtic Glasgow's history . Its nickname goes back to the actor Cesar Romero , who played the driver of the getaway car in the movie Frankie and his cronies . McNeill was one of the few Celtic players who owned a car at the time. 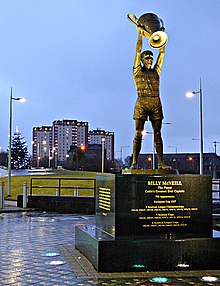 Scotland's Footballer of the Year

Scotland's Football Coach of the Year