The Scottish Parliament has decision-making powers in areas delegated to it by the UK Parliament, including education, health, agriculture and justice. Parliament can legislate here and has limited leeway in setting tax rates. In addition, the Scottish Executive is accountable to Parliament. Other tasks such as the entire field of foreign policy will continue to be carried out by the British Parliament.

The voting age has been 16 since 2015. The Scottish general election was the first in the United Kingdom to use proportional representation for seats . Comparable to the German electoral system, each voter has two votes. He distributes them to a direct candidate in his constituency and a party. Of the 129 seats, 73 will be awarded to the winner of a constituency by majority voting. The remaining 56 are determined by proportional representation from the eight different electoral regions. Each region sends seven MPs from the regional lists of the participating parties. If this system leads to overhanging mandates , the number of seats for other parties in the region is reduced in order to keep the number of MPs constant.

There are 131 seats in the plenary hall. Of the total of 131 seats, 129 are occupied by elected members of parliament and two are seats for the Scottish judicial officers, the Lord Advocate and the Solicitor General for Scotland , who are not elected members of Parliament but members of the Scottish Government . As a result, the judicial officers can attend the plenary sessions of Parliament and speak, but cannot vote because they are not elected MPs.

All MPs elect a Presiding Officer, comparable to the German President of the Bundestag . Ken Macintosh has held this post since May 2016 .

In addition, the parliament elects the First Minister , head of the executive branch and, in terms of his duties, very similar to the German Prime Minister . Nicola Sturgeon has been First Minister since November 2014 . Although the constitution makes it the task of parliament to designate the other ministers, the reality is that they are chosen by the first minister.

Since September 2004 the seat of parliament has been in the new parliament building in Holyrood, a district of Edinburgh , directly across from Holyrood Palace , the official residence of the Queen in Scotland. The design comes from the Catalan architect Enric Miralles . It is characterized by its distinctive roof in the form of an upturned ship. It was opened on October 9, 2004 by Queen Elizabeth II.

In the time before completion, Parliament met in the General Assembly Hall of the Church of Scotland in Edinburgh. Official media meetings were mostly held in the neighboring courtyard of the University of Edinburgh theology school. Today, such events are held in the garden area of ​​the new parliament building. It is claimed that this is where real politics takes place.

Interior view of the Scottish Parliament

In mid-October 2005, the new parliament building won the Stirling Prize , the prestigious architecture prize of the Royal Institute of British Architects . Awarded annually, this award is considered the highest distinction for contemporary British architecture.

Until the Act of Union 1707 , the Scottish Parliament, with its seat in Parliament House (Edinburgh), was the legislature of the independent state of Scotland, whose monarch had also been King of England from 1603 . In the negotiations for unification with England, the Scots wanted to push through the establishment of a Scottish regional parliament. The English refused, however. For the next 300 years Scotland remained without a parliament, despite numerous proposals for a regional parliament.

Since the late 1960s there has been a renewed flare up of Scottish national sentiment. This was triggered by oil discoveries in the North Sea . Scottish nationalists felt that Scotland was not getting enough of the oil money.

In 1979 the devolution referendum in Scotland voted on the establishment of a regional parliament. Although a narrow majority of the electorate voted for the referendum, the required number of yes votes of 40% of all eligible voters was not achieved. Therefore, the referendum failed, which was criticized by supporters with the Scotland said “yes” campaign . 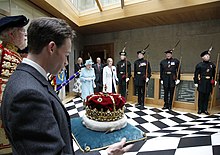 Opening of parliament in 2011 in the presence of Elizabeth II.

In the 1980s and 1990s, the desire for partial independence continued to grow under the conservative governments of Margaret Thatcher and John Major . This can be explained by the small number of Scottish MPs in the Conservative Party and the associated weak influence on the government. In 1997 the Labor Party won the election with Tony Blair . As Labor supported decentralization, a referendum was held in September 1997, which resulted in a large majority in favor of a regional parliament. After the May 1999 election, the British Parliament gave the new Parliament its new rights on July 1, 1999. At the opening, Sheena Wellington sang Robert Burns ' A Man's a Man for A' That , which was translated and known in Germany as Despite everything . The present Queen Elizabeth II was carried the Scottish royal crown , which has since been carried out at the opening of parliament at the beginning of each legislative period.

The 2015 general election was postponed to May 2016 with the Fixed-term Parliaments Act 2011 from May 2015, as the British government had introduced a five-year legislative period for the British House of Commons and thus the British General Elections in 2015 took place.

Legislature of the United Kingdom , the British Overseas Territories and the Crown possessions of the British Crown

Parliaments of the Crown possessions of the British Crown :
Guernsey : States of Guernsey  | Isle of Man : Tynwald ( House of Keys , Council on Legislation ) | Jersey : States of Jersey