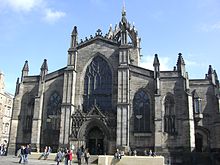 The Church of Scotland ( Scottish Gaelic : Eaglais na h-Alba , Scots : Kirk o Scotland , German  "Church of Scotland" ) is a Presbyterian ( Reformed ) Church. In common, informal usage, it is called "the Kirk". It is not, like the ( Anglican ) Church of England , the established state church , but as the church that has dominated for centuries it has the character of a national church and still has a special position in Scotland.

The Church puts its membership at 325,695, less than 6% of the population of Scotland. However, in the 2014 census, 27.8% of Scots said they belong to the Church of Scotland. The Church has wards in all parts of Scotland, but also has some wards in England and 15 wards outside the UK. The municipality for the German-speaking area has its seat in Bochum .

Impetus from the Reformation reached Scotland as early as the 1520s. In 1528 Patrick Hamilton , who had brought the new teaching from Germany, was executed in St Andrews . King James V fought the Protestant endeavors, especially after the beginning of the English Reformation in 1531. Even after Jacob's death, religious policy continued; an attempt at Reformation by George Wishart also ended in 1546 with the execution. Only John Knox , who took over the leadership after Wishart's death and was influenced by John Calvin in temporary exile in Geneva , was able to establish the Reformation. Returning to Scotland in 1559, he won over large parts of the population and the influential nobility for the doctrine of the Reformation, and in August 1560 he achieved that the Scottish Parliament accepted the Confessio Scotica . The Catholic Queen Maria Stuart , who had returned from France in 1561, did not ratify the transition of her country to the Reformation, but initially did not fight it either, so that the ecclesiastical situation remained undetermined for a long time. Only with the adoption of the Second Book of Discipline of 1578 in 1592 was the Reformation consolidated and the state church given its clear Presbyterian structure. The office of bishop was retained, but its powers were severely limited.

Since Maria Stuart's son Jacob ruled England and Scotland in personal union in 1603 , he tried to give the Scottish Church an episcopal character. His son Charles I continued this policy. His attempt to introduce the Anglican Book of Common Prayer in Scotland aroused opposition from the Covenanters and led to the General Assembly of 1638 abolishing the episcopate in Scotland. This triggered the Episcopal Wars, which were part of the immediate prehistory of the English Civil War . In the course of this, the Long Parliament set up the Westminster Synod in 1643 , which was to formulate a common basis of faith and church order for the churches in England and Scotland. The Westminster Confession was approved by Parliament in 1647, but could only prevail in Scotland, even though the episcopal office was temporarily re-established as a result of the Stuart Restoration of 1660. Since the Glorious Revolution of 1688/1690 the episcopate in the Church of Scotland has been abolished for good; the church has since been definitely Presbyterian. This created a split that gave rise to the Anglican - Episcopal Scottish Episcopal Church , a sister church to the Church of England .

According to the Calvinist doctrine of four offices , both pastors and presbyters ( elders ) are ordained in the Church of Scotland , and since 2010 also deacons . In 1888, Grisell Baillie was the first woman appointed as a deacon. The ordination of women as elders has existed since 1966, and ordained pastors since 1968. In 2004, Alison Elliot was the first woman to chair the general assembly .

The flag, the coat of arms and the logo symbolize the motto of the Church of Scotland “nec tamen consumebatur” (German: “and he was not consumed”). It refers to the burning bush in the calling history of Moses ( Ex 3.2  EU ). This bush, although on fire, was not burned, and God called Moses to bring the people of Israel out of Egypt. This burning bush is shown in front of the St Andrews cross of the Scottish flag ( Saltire ).