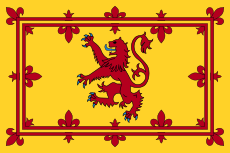 The Lord High Commissioner to the Parliament of Scotland was appointed as the monarch's personal representative to the Parliament of the Kingdom of Scotland between 1603 and 1707 . The Act of Union 1707 made this function redundant. However, a Lord High Commissioner to the General Assembly of the Church of Scotland has been appointed as the sovereign's personal representative every year since 1690 .

Before 1929 the General Assembly met in the former Tolbooth Highland St John's Church in Edinburgh on the Royal Mile. A throne was provided for the High Commissioner there. After the unification of the Church of Scotland with the United Free Church of Scotland in 1929, the General Assembly (since 1930) always met in the former assembly hall of the United Free Church, The Mound . The High Commissioner sits on a throne in the Royal Gallery , which is, however, physically outside the Assembly Hall - as a symbol of the Church's independence in spiritual matters from government intervention. The first meeting of the new United Church in 1929 was held in Edinburgh's Annandale Street (now a bus depot), the only building large enough for the meeting. A trivial protocol dispute over access to the Royal Gallery in this temporary meeting place almost led to the title being abolished. The Lord High Commissioner (the Duke of York, later King George VI ) should have walked through the conference room to the Royal Gallery - a symbolic act of state interference in the hard-won spiritual independence of the Church. The moderator at the time, Dr. John White found this unsustainable and even suggested that the office could be abolished altogether. Eventually a consensus was reached on this issue and the office of High Commissioner was retained.

Apart from the opening and closing speeches, he has no duties, but he is always present. After the meeting, he personally informs the monarch about the sessions of the session week.

During the General Assembly, the High Commissioner is treated like the monarch as the personal representative of the monarch. He is addressed with Your Grace and addressed with a bow or curtsey. When Princess Anne was appointed in 1996, she was addressed as Her Grace for the duration of the office, as the office ranks higher than Her Royal Highness in the protocol order of precedence in Scotland .

If a woman is appointed to the office, the alternate title Her Majesty's High Commissioner may be used. Margaret Herbison was the first woman to hold this post (1970 & 1971).

The High Commissioner has resided in the Royal Scottish Palace of Holyroodhouse since 1834, where he holds a garden party for the members of the General Assembly on the Saturday afternoon of the assembly week . He is entitled to use the Royal Scottish banner. Even the official car receives special treatment and, with the exception of that of the Queen, is the only vehicle in the country without license plates. However, the signs will be reattached during the final meeting and the High Commissioner will get into the car as an ordinary citizen.

There is a budget of His Excellency the High Commissioner . This includes the head of the house the Purse Bearer ( Treasurer ), a chaplain , aide-de-camp ( Flügeladjudant ), a Lady-in-Waiting ( maid ), extraordinary Lady-in-Waiting, and Maids of Honor ( maids of honor ). The staff bearer carries the Lord President's staff or the old Chancellor's staff . A master of the horse is no longer appointed. The subordinate staff also include the treasurer's assistant and a maid.