In 1986 he was awarded the title of Duke of York . He is ninth in line to the British throne . He is best known for his marriage to, and later divorce from, Sarah Ferguson . He served in the Royal Navy and took part in the Falklands War.

Due to possible connections between Andrews and sex offender Jeffrey Epstein , it was announced in May 2020 that he was no longer representing the royal family. In January 2022, he relinquished all military titles and patronage "with the Queen's approval and consent" in the wake of the allegations.

The prince was the first child born to a reigning British monarch since the birth of Princess Beatrice of Great Britain and Ireland (1857-1944). His two older siblings , Charles and Anne , were born before their mother's accession to the throne. He was named after his paternal grandfather Andrew of Greece . Since birth, he has held the title His Royal Highness The Prince Andrew . Until the birth of Prince William in 1982, he was second in line to the British throne, behind his brother Charles. He is currently in ninth place.

Prince Andrew was initially educated by tutors before attending Heatherdown Preparatory School near Ascot , Berkshire . In 1973 he went to Gordonstoun Private School in Morayshire , Scotland , which his father and brother Charles had attended. After graduating in 1979, Andrew decided against going to university and enlisted in the Royal Navy.

Andrew trained as a Sea King helicopter pilot in the Royal Navy and as such took part in combat operations of the Falklands War aboard the aircraft carrier HMS Invincible in 1982 . The British government initially wanted to withdraw Andrew from the ship and give him other duties, fearing the death of one of the Queen's sons. However, they insisted that Andrew remain on board the Invincible .

After the war, Andrew continued his training on other helicopter models. In 1984 he was promoted to lieutenant ; his mother appointed him her personal aide - de -camp . In the years that followed he served as a fighter pilot and in command of a minesweeper . At the end of his military career he worked in the Ministry of Defense . Andrew retired from the Royal Navy in 2001 with the rank of Commander . Andrew was promoted to Vice Admiral in 2015 to mark his 55th birthday . In mid-January 2022, Britain's Queen Elizabeth II withdrew all honorary military titles and royal patronage from her son Andrew, who was sued for abuse allegations in the United States.

Prince Andrew and Sarah Ferguson after their wedding on July 23, 1986

On 23 July 1986, Prince Andrew married Sarah Ferguson , second daughter of Major Ronald Ferguson, at Westminster Abbey . On the occasion of his marriage he was bestowed the titles of Duke of York , Earl of Inverness and Baron Killyleagh by the Queen , most recently held by his maternal great-grandfather King George V and maternal grandfather King George VI. , had been carried.

The Duke and Duchess of York have two children:

In 1992, pictures of the Duchess of York appeared in the British tabloid press, in which she can be seen in an insidious manner with her financial adviser, the American John Bryan. On March 19, 1992, Andrew and Sarah announced their intention to separate. The divorce took place in May 1996. Sarah lost the title of Her Royal Highness but retained the title of Duchess of York . 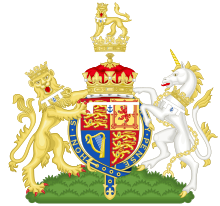 Coat of Arms of Prince Andrew, Duke of York

Prince Andrew became a Counselors of State in 1981 . Councilors of State can carry out certain official business and sovereign rights of the Queen when she is abroad or prevented (e.g. due to illness). Any two Councilors of State may attend Privy Council meetings, sign State documents, or accept new Ambassadors ' letters of recommendation . From 2001 to 2011, Prince Andrew served as the UK representative for international trade and investment at the Department for Trade and Industry. He had inherited this office from his uncle Edward, 2nd Duke of Kent . After he had come under massive criticism, among other things, because of his contacts with some shady personalities, he resigned from this post.

From 2015 to 2019 he was Chancellor of the University of Huddersfield .

Known for his golf skills , the Duke is the Captain of the Royal and Ancient Golf Club of St Andrews . He also became patron of some golf clubs. From 2000 to 2006 he was President of the Football Association , the English Football Association. Like all members of the royal family, he became honorary colonel of various units of the armed forces and patron of various charities.

In his role as Britain's Trade Representative, while away on official business, Andrew supported Banque Havilland , the private Luxembourg bank owned by his longtime friend and real estate tycoon, David Rowland . Rowland was also a close confidant of former Prime Minister David Cameron and the largest single donor to the British Conservatives . After publishing several critical articles that earned him the reputation of a tax evader , he was unable to take up the post of treasurer in 2010. His bank was formed from the remnants of Iceland 's Kaupthing Bank , which filed for bankruptcy in the wake of Iceland's 2008–2011 financial crisis .

Andrew enabled the Rowland family to use official appointments to attract wealthy clients to their own bank. In addition, he granted them access to secret government documents. Together with the Rowlands, Andrew also founded a company called Inverness Asset Management ; In 1986 he was made Earl of Inverness . Inverness Asset Management is based in the Caribbean tax haven of the British Virgin Islands . The aim was to hide the money collected through the royal contacts tax-free in an offshore fund.

Prince Andrew has long been close friends with US investment banker and later convicted sex offender Jeffrey Epstein . He had met him through British woman Ghislaine Maxwell , daughter of billionaire newspaper tycoon Robert Maxwell . During the 2008 Miami trial against Epstein, in which he pleaded guilty to two counts of forcing minors into prostitution and was sentenced to 18 months in prison, Andrew was incriminated by one of the witnesses. According to this, he is said to have abused the then minors at sex parties in London and New York and to have participated in an orgy with several minors on Epstein's estate on his private island Little Saint James in the Caribbean. Epstein told the minor to do whatever he asked with the prince and then to report the details to him. Epstein's intent was to obtain blackmail information.

In January 2015, Bradley Edwards, the alleged victim's attorney, asked Andrew to testify under oath on the allegations. That same month, the National Association for People Abused in Childhood (NAPAC) referred the allegations made by Virginia Roberts Giuffre (a key witness and victim in the Epstein case) to Detective Director Peter Spindler at the Metropolitan Police . An investigation into the "available evidence" began. However, "no full investigation" has been launched.

In April 2015, the Miami court dismissed the abuse allegations against Andrew. The judge declared, "The actual details of who the women were dealing with are immaterial and irrelevant."

In 2016, lead witness Roberts Giuffre testified that she had sex with Andrew when she was a minor. Buckingham Palace has always denied the allegation.

Epstein faced another charge of pimping and child abuse, this time in New York, and was found dead in his cell while on remand on August 10, 2019.

A week later, on August 16, 2019, Channel 4 News reported that the Metropolitan Police had decided to close the "investigation" into allegations in the Roberts Giuffre case. The Metropolitan Police declined to answer questions about the allegations and whether they ever questioned Epstein, Ghislaine Maxwell, Andrew or anyone in the royal household. A day later, on August 17, 2019, a video was released showing Andrew remaining friends with Epstein even after Epstein's conviction as a sex offender . It shows Andrew on December 6, 2010, while still in office as the State Department 's special adviser on international trade and investment , at Epstein's Herbert N. Straus House townhouse on the Upper East Side in New York. Andrew then spent six days in Epstein's city mansion. Buckingham Palace said: "His Royal Highness condemns the exploitation of any human being and to suggest that he would condone, participate in or encourage such behavior is abhorrent."

In late August 2019, Andrew agreed to speak to the FBI . In a second statement, Buckingham Palace said: "Members of the Royal Family will always cooperate appropriately with investigators." Brad Edwards, Roberts Giuffre's attorney, expressed hope that Andrew was now ready to testify under oath: "We have been asking for the Duke’s support for years.”

On November 16, 2019, Andrew spoke about his involvement in the Epstein scandal in an interview for BBC Newsnight . In it, he denied having had any contact with Roberts Giuffre, who worked for Epstein as a forced prostitute. He stated that he could not remember ever meeting the then minors. The hour-long conversation made headlines around the world and was described as "a disaster". Andrew became entangled in contradictions, he lost credibility and it ultimately led to his resignation from public office.

Following the BBC interview, companies such as accounting firm KPMG , Standard Chartered Bank and insurance company Aon , as well as institutions such as Bond University and RMIT University , distanced themselves from Andrew.

Giuffre reiterated her allegations on December 2, 2019 in an interview broadcast by the BBC as part of a TV special. In it, she explained, "This isn't some shabby sex story. This is a human trafficking story , this is an abuse story . And it is a story about a member of your royal family.”

In early January 2020, Manhattan Attorney Geoffrey Berman announced at a press conference in front of Epstein's mansion on Manhattan's Upper East Side that the FBI had contacted Andrew, but he - despite earlier promises - was not willing to cooperate. It was understood there would be no attempts to force Andrew to testify. After Epstein's death, United States Attorney General William Barr publicly stated that Epstein's investigation into the federal sex trade would continue.

In May 2020, it was announced that Andrew would no longer represent the royal family permanently. Prince Andrew was sued on August 9, 2021 by Roberts Giuffre, who alleged that he sexually abused her at Jeffrey Epstein's Manhattan mansion and other locations. At the time she was not yet of legal age. Andrew denies sexual contact with Roberts Giuffre. In January 2022, his appeal against the lawsuit was dismissed.

In January 2022, Andrew relinquished all military titles (not listed here) in the wake of abuse allegations.

In 2013 Andrew was elected a Fellow of the Royal Society . Traditionally, the ballots only contained the option to tick a “yes” or void the ballot. This procedure led to protests from prominent members of the Royal Society. Participants in a 1961-62 campaign as part of the New Zealand Geological Survey Antarctic Expedition named the Prince Andrew Plateau in Antarctica after him.

Prince Andrew resided at Sunninghill Park in Windsor until 2004 . In 2002 Buckingham Palace announced that the Prince would be moving his official residence to Royal Lodge , Windsor, the former home of his grandmother, the Queen Mum . He lives there with his ex-wife and their two daughters.

Presidents of the Football Association