This article describes the different types of vehicles; the various methods of mine defense are described under sea ​​mine # mine defense . Mining of land is under demining described

Anti-mine vehicles are warships whose main task is to clear sea ​​mines .

Sea mines have been used in various wars since the mid-19th century. In the Crimean War , the English put an oar boats that grapnel ( draggons were trailing) for mine behind. Attempts to develop specialized anti-mine vehicles during the American Civil War failed. During the Russo-Japanese War , torpedo boats were first used as mine sweepers. While most states equipped torpedo boats or fishing cutters for mine defense, the first specialized mine clearance vehicles ( Fugas for the Baltic Sea, Albatross for the Black Sea) were commissioned by the Tsarist Navy in 1910.

During the First World War , England, too, initially used fish trawlers to defend against mines in the English Channel, which were supposed to cut the ropes from the anchorage mines. Because of the extensive mine barriers in the North Sea and the English Channel, increased operations were soon required on both sides, so that special defense vehicles were developed and built in greater numbers.

The first British ship class of such anti-mine vehicles, which were also used for mine-laying and submarine hunting, were the 24 relatively large units of the Acacia - ( Flower ) class. They were about 80 meters long, displaced 1200 tons , were given a triple hull hull to protect against mine explosions and had been used between Spitsbergen and the Mediterranean since 1915 . In Germany, the first of 26 units of the M 1914 minesweeper, which weighs around 500 tons, was put into service in 1915.

In the course of time different basic types emerged:

While old anchor mines could still be removed easily, modern mines are much more difficult to destroy. Just as the sea mines continued to develop, the procedures for removing them had to be adapted to the changed conditions. Modern anti-mine vehicles are partly a combination of different basic types. The German mine hunting boats of class 332 were also equipped as mine diving boats. The former class 343 rapid minesweepers were also converted later so that they could also be used as mine hunters. In this way, a wide variety of tasks can be performed by a single unit.

Former fast minesweeper Hameln (M1092) of the German Navy , the type ship of the ship class 343 named after it, meanwhile after conversion hollow rod steering boat of the Ensdorf class (352)

Minesweepers were the first warships built specifically for mine defense. They were designed to clear the anchor towers that were initially only used. Therefore, they have a shallow draft and good maneuverability. The early boats were often built of steel, in the 1940s the non-magnetic construction method was used to reduce the risk of magnetic mines. Wood was initially used for this, later GRP or non-magnetizable steel. For their use in the coastal apron, minesweepers were usually equipped with light weapons and could also be used for guard duties. The German deep-sea mine seekers deployed in the area of ​​the English Channel in the Second World War were so heavily armed that they were also referred to as channel destroyers.

The clearing equipment can consist of various towed devices that are used to cut the cables of the anchorage mines. Initially, minesweepers were used in teams to pull the clearing cables through the water between the boats and to clear a wide canal. Clearing harnesses were later introduced, which swung out to the side using kites so that the boats could be used individually. This type of mine clearance is known as mechanical clearance .

Against acoustic and magnetic mines , sound transmitters and electromagnetic cable loops or so-called hollow rods, magnetic coils in a boat hull or floating bodies, are dragged in, which simulate the magnetic field of larger ships and detonate the mines behind the minesweeper. This procedure is also called simulation rooms. Pressure fields of ships cannot be simulated, which is why pressure field mines cannot be fought by minesweepers. Conventional mine clearing with towing equipment was still being practiced by the fast minesweepers of class 343 in the 1990s, in which the boat itself had to drive through the minefield. Although modern units, thanks to their design, remain undamaged even after a mine explosion, there is a residual risk. Attempts are being made to further reduce this by equipping new or modernized minesweepers with a mine avoidance sonar against anchor mines. Furthermore, most of the modern units can remain outside the minefield themselves, as the actual clearing activity can be carried out remotely using powered hollow rods such as the TROIKA system (see below: anti-mine drones) and other drones. Correspondingly, the fast minesweepers of class 343 were partly converted into hollow rod diving boats of class 352 and partly into minehunters of class 332.

Mine clearing boats are small minesweepers for use near the coast and in ports. At first, converted motor boats and yachts were used in this area. They mostly only had a relatively small clearing gear for use in narrow fairways. From 1915 the Imperial Navy had shallow mine clearance boats (called F-boats) built at various small shipyards. A total of 75 units of this type were built and put into service.

In the 1920s, the Abeking & Rasmussen (A&R) shipyard in Lemwerder designed clearing boats as an independent type of ship for the first time . The first boats were built in 1929-1934. They had a displacement of 60 t, were built in composite construction (steel frames with wooden planking) and had MWM diesel engines with a total of 714 hp that acted on two Voith Schneider propellers. Later boats in World War II were a bit larger and powered differently.

In the German Navy, the mine sweeping boat type was the result of the "fast minesweeper" type, which was initially intended as a secondary task to combat submarines .

The mine clearance ship Osnabrück

During the Second World War, the Kriegsmarine converted several requisitioned combination ships into so-called mine clearance ships. As mother ships, they carried up to 14 small motorized barges on deck, which were then launched to clear mines. 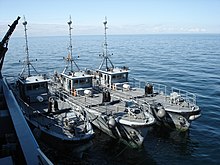 Remotely controllable clearing drones from the TROIKA mine defense system 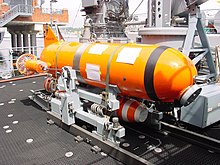 Anti-mine drones are remotely controlled small boats or underwater vehicles that are used in a number of different ways for anti-mine defense. Remote-controlled hollow bars contain a powerful electric magnet coil that simulates the magnetic field of a ship . Such boats can also carry sound buoys to simulate the sound field of a ship. Further developments also allow the installation of sonar systems , the image of which is transmitted to the steering boat. This enables mines to be located and identified.

Remotely controlled underwater vehicles (underwater drones ) such as the penguin can identify contacts more closely using cameras and / or sonar and, if necessary, fight them with explosive charges. They either place the charge at the mine or they carry the explosive charge and are then lost during use.

Barrier breakers are ships that detonate mines when passing through a minefield with their own noise, magnetic and pressure field and thus clear a fairway free of mines. They complement minesweepers with regard to combating pressure mines. Barrier breakers were first used in World War I and in greater numbers in World War II and thereafter. They were mostly converted cargo ships , the holds of which were secured against filling up with barrels, cork or other buoyant cargo. Anchor mines were cut or repelled with the so-called bow protection device and detonated after evacuation. During the Second World War, some German barrier breakers had magnetic windings, so-called VES systems , which increased their magnetic field with the aim of detonating mines as soon as possible when approaching them. Small barrier breakers that were used in port entrances, estuaries and inland waterways were equipped with a Canona Antimagnetica or a cross-pole device, both of which worked on the same principle. In the aft cargo hold of the barrier crusher used in and after the Second World War, additional marine or aircraft engines were installed to supply the electricity required to generate the ship's electromagnetic force field (the 131 Schwan barrier crusher pictured had a total of twelve Junkers aircraft engines). As early as the First World War, some barrier breakers were equipped with on-board aircraft that had the task of discovering mines from the air and supporting mine defense operations as reconnaissance aircraft.

Explosions next to the ship or in the aft area at the level of the engine rooms should be avoided. As on some other anti-mine vehicles, the crew was protected from the detonation by wooden or cardboard pads on the decks. Nevertheless, the service on barrier breakers remained dangerous because the ship and crew were exposed to the mine action.

The ships were very resistant due to the various renovations. On October 23, 1942, as a result of a bottom mine detonation near Ameland, the forecastle of barrier breaker 11 Belgrano broke off at the level of the front edge of the bridge. Both parts of the ship remained buoyant, with the aft ship even another mine was cleared. In 1946, after a mine explosion, the forecastle of the ship now used by the German mine clearance service broke off again. Both parts of the ship remained buoyant. The barrier breaker 11 ran back into the Elbe estuary under its own power and with the fore section that was towed with it.

The Grömitz (M 1064), a class 332 minehunter, almost identical in construction to the class 343 minesweeper

Modern ground mines can often not even be cleared by simulation. In response, mine-hunting boats were developed, which specifically seek out and destroy mines. First, the sea floor is scanned with a high-frequency sonar. The contacts established in this way are then identified with an underwater drone or by mine divers and, if necessary, fought with mine destruction charges. In the case of ground mines, the explosives in the mine are usually detonated by the explosives placed nearby by means of a so-called "sympathetic ignition". In the case of anchor mines, however, the explosives must be attached to the anchor rope.

In contrast to mine clearing with conventional minesweepers, these procedures are very time-consuming, as each mine has to be located and destroyed individually. In this way, however, mines can be fought that cannot be cleared by minesweepers. Mine hunting finds its limit at mines hidden in the ground. These in turn have to be fought by simulating the minesweepers. Mine hunting boats such as the Danish StanFlex 300 ( Flyvefisken class ) have so-called side -viewing sonars with which they can locate contacts in layers of mud and sand, among other things.

The class 332 minehunters built by a German shipyard association were made of non-magnetizable steel, just like the almost identical former class 343 minesweepers. These and various other special features make these boats particularly insensitive to mines.

Mine diving boats are emergency vehicles for mine divers that are used in narrow waters such as ports and driveways. Mine diving boats have the necessary equipment for diving, such as compressors, pressure chambers and relaxation rooms.