Standard Chartered Bank , listed on the London Stock Exchange on the FTSE 100 , is a UK financial company with headquarters in London and operations in many countries, particularly Asia and Africa. The company does not generate its main sales in Great Britain, but in Hong Kong , South Korea , India and other parts of Asia.

The bank is one of the major banks that has been classified by the Financial Stability Board (FSB) as a global systemically important financial institution . It is therefore subject to special monitoring and stricter requirements for the endowment with equity .

The Standard Chartered Bank was created from a merger in 1969 between the British overseas banks Standard Bank Ltd. and the Chartered Bank of India, Australia and China .

The Standard Bank opened their business in Port Elizabeth , South Africa , in 1863. Between 1890 and 1910 the Bank opened company branches across Africa, although some newly opened locations had difficulties and were then closed again.

The Chartered Bank is the older bank, which was founded in 1853 when the Royal Charter of Queen Victoria to James Wilson fared. The first stores opened in Calcutta and Bombay in 1858 and then in Shanghai . In 1854 a branch opened in Hong Kong and an agency opened in Singapore. Chartered Bank opened business across Asia between 1860 and 1900, and in the first decade of the 20th century it became the first foreign bank to be licensed to do business in New York .

Company history after the merger 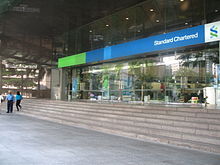 Violations of the law of sanctions

On April 10, 2019, the Süddeutsche Zeitung reported that Standard Chartered agreed to a payment of around $ 1.1 billion in total to settle investigations into alleged violations of sanctions law. The US Treasury Department announced a corresponding comparison with authorities in the United States and Great Britain. The money house was accused of having carried out numerous transactions for people in countries such as Burma, Cuba, Iran, Sudan and Syria from June 2009 to May 2014, thereby violating US sanctions. According to the ministry, the majority concerns prohibited Iran business. In 2012, the bank concluded a hundreds of million dollar settlement with US overseers for violating Iran sanctions between 2001 and 2007.