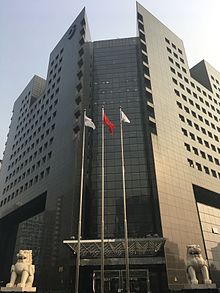 The headquarters of the CCB in Beijing

The China Construction Bank (CCB, Chinese  中国 建设银行 , Pinyin Zhōngguó Jiànshè Yínháng  - "Chinese construction bank") is one of the four major commercial banks in the People's Republic of China . According to the Financial Stability Board, it has been one of the world's systemically important banks since November 2015 . Total assets of the Bank amounted to 2,016 3,016.6 billion US dollars .

With a turnover of 150.3 billion US dollars (USD) and a profit of 38.8 billion USD, the China Construction Bank is the world's second largest bank according to Forbes Global 2000 (fiscal year 2018). As of October 27, 2005 , more than US $ 220 billion in CCB shares have been traded on the Hong Kong and Shanghai stock exchanges.

Like other Chinese banks, the CCB suffered for a long time from political credit guidelines, inefficient management, too many employees and “bad loans” . It received financial injections totaling 22.5 billion dollars from the Chinese government for the purpose of restructuring. In addition, problem loans were outsourced to state asset management companies and the employment structure and branch network were consolidated. The proportion of bad loans was then reduced from 17% to less than 4%. A third of the branches were cut and a quarter of the employees laid off.

Positioning in the market

The China Construction Bank is one of the large Big Four banks in the People's Republic of China . It has more than 14,000 branches, around 12,500 ATMs and more than 310,000 employees in China. The bank has a 12% market share in loans and 13% in savings. In the real estate and infrastructure business, it is the leader with a 27% share. The strong concentration on this market makes the bank dependent on property speculation and the economy.

For the modernization, the CCB (like other large Chinese banks) relies on capital and know-how from abroad. The following foreign companies have stakes in the bank:

With the help of the two foreign shareholders, the CCB wants to invest in management training and modern technology. This is also intended to enable a more solid risk assessment of customers in order to be able to grant loans in the future more according to commercial considerations.

The China Construction Bank Corporation, Swiss Branch Zurich (“CCBZB”) was founded on September 25, 2015 and appointed as the sole RMB clearing bank in Switzerland. The CCBZB will participate in the onshore foreign exchange and money market in mainland China via CFETS (China Foreign Exchange Trading System). The CCBZB offers processing services in real time for cross-border RMB payments and offers its corporate and institutional customers various RMB services via straight-through processing. The CCBZB will also support Swiss institutions that, with strong support from the CCB Group, are interested in participating and investing in the RQFII program.

On June 17, 2005, a strategic cooperation and participation by Bank of America and CCB was decided. In the negotiations it was decided that the American stake could be increased to 19.9%. Initially, Bank of America acquired a 9% stake for three billion dollars, but then reduced this in several steps to 1 percent. (As of November 2011)

On July 4, 2005, CCB and the Singaporean Temasek Holdings agreed on a strategic cooperation between the two companies.

Since February 2004 the CCB has had a joint venture with Bausparkasse Schwäbisch Hall .