Rolls-Royce Holdings plc is an international group that emerged from the manufacturer of the luxurious Rolls-Royce automobiles , which have not been part of the group since 1998. The Rolls-Royce Holdings plc is a in the Financial Times Stock Exchange Index in London listed company, which is mainly known for the production of engines and components for civil and military aviation, but also in the fields of shipping and energy technology.

The oldest part of the company, automobile production, belongs to the VW Group as Bentley Motors , while the rights to the Rolls-Royce Motor Cars brand went to BMW . Rolls-Royce automobiles have been produced by a BMW subsidiary founded for this purpose since 2000. 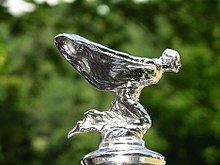 In the spring of 1904, the engineer Henry Royce and the businessman Charles Rolls joined forces. Royce himself always referred to himself as a "Mechanic", but never as an engineer .

They wanted to build cars together. On March 15, 1906, they founded Rolls-Royce Limited in Manchester . The 40/50 HP (1906–1925) was presented as the first model at a public motor show in London. It cost £ 305 at the time . The vehicle earned the company a reputation for building the best automobile in the world as it set a new long-distance record. The Rolls-Royce 40/50 HP, known as Silver Ghost only from 1907 , also proved itself in military use. Lt. who became famous as "Lawrence of Arabia" Col. TE Lawrence wrote in his book " The Seven Pillars of Wisdom " about this famous, reliable automobile: "A Rolls-Royce in the desert is worth more than rubies". From 1911 he wore the legendary " Spirit of Ecstasy " as a hood ornament , a female figure for whom Miss Eleanor Velasco Thornton is said to have modeled the sculptor Charles Sykes. The origin of the term "Emily" for the Spirit of Ecstasy , known in German-speaking countries, is unknown. Eleanor Thornton was never called that.

During the Great Depression , Rolls-Royce took over its competitor Bentley in 1931 . Initially, Bentley was run as a sporty brand in the company; from 1965, Rolls-Royce and Bentley vehicles were largely identical. Automobile production was relocated to Crewe as early as 1946 .

In 1914, Rolls-Royce entered aircraft engine manufacturing with the Hawk , which later, with types like the Rolls-Royce-Merlin, soon made up most of the business. During the Second World War , approximately 50 percent of Allied aircraft were equipped with engines from Rolls-Royce and its licensees.

Rolls-Royce took over the development of jet engines in 1943 from the Rover Company and in 1943 supplied the Welland with the drive for the prototype of the Gloster Meteor ; the first jet-powered fighter of the Royal Air Force to be produced in series from 1944 . Later, starting in 1948 with the Dart , turboprop engines (PTL) were also mass-produced. After taking over Bristol Siddeley in 1966, Rolls-Royce had the most comprehensive engine program in the world.

The original logo was red letters on a silver background. The black logo was first used in 1931. Henry Royce gave instructions in 1933 to permanently change the font color of the letters "RR" in the company logo from red to black. This change came due to numerous complaints from high-ranking customers (including the Prince of Wales ) that the red did not harmonize with some car colors. Black was chosen because it seemed suitable for all colors. The legend that this color change was made due to the death of Henry Royce in April 1933 contradicts the facts given.

In 1971 Rolls-Royce filed for bankruptcy because the development of the three-shaft Rolls-Royce RB211 engine for the Lockheed L-1011 TriStar threw the company into financial difficulties. The British government prevented the collapse with a huge investment of taxpayers' money. Rolls-Royce was nationalized, and in 1973 the engine manufacturer was separated from the automobile manufacturer.

Rolls-Royce Motor Cars has been manufacturing automobiles in Goodwood since 2003, the sixth production site in the more than 100-year history of the brand. Sir Henry Royce spent the last years of his life about 10 km away, in West-Wittering on the coast; his house and studio are still there and privately owned. On October 1, 2019, the group took over the electric aircraft propulsion business from Siemens.

Rolls-Royce plc offers a wide range of engines for civil and military fixed-wing aircraft and helicopters . The engines and components produced in Germany are listed at Rolls-Royce Germany.

In the military market, Rolls-Royce plc is the second largest engine manufacturer in the world and the largest in Europe.

Issued EJ200 for the Eurofighter Typhoon

Rolls Royce was one of the most important aircraft engine manufacturers for decades . The line of development was continued over 30 years in a number of engines.

For the British armed forces in particular, the following engine models were built on vehicle and armored engines according to a modular system:

Other products include technical equipment for ships , including various propulsion systems for ships.

It is comparatively little known that Rolls-Royce is also active in power generation. For example, aeroderivatives - turbines for power plants and energy technology are manufactured. Rolls-Royce also has a division that develops nuclear technology, such as: B. for the propulsion of nuclear submarines .

The area aeroderivative - turbines was in 2014 Siemens sold.

Rolls-Royce plc is represented in Germany with its Civil and Defense Aerospace, Power Systems and Ship Technology divisions. Within the RR Group, Germany has the second largest workforce after the United Kingdom with around 11,000 employees at 14 locations. Rolls-Royce Power Systems AG (RRPS) has been part of Rolls-Royce since 2014 . The traditional German company - which emerged from Maybach-Motorenbau GmbH (until 1918 Luftfahrzeug-Motorenbau GmbH) - based in Friedrichshafen, supplies large engines, drive systems and decentralized energy systems.

Rolls-Royce Deutschland Ltd & Co KG (RRD) is active in the aviation industry and is the only German aircraft engine manufacturer with approval for the development, manufacture and maintenance of civil and military turbine engines. Rolls-Royce Germany currently has around 3,600 employees at its locations in Dahlewitz and Oberursel, of which around 1,100 are in Oberursel.

The RRD location in Oberursel - whose roots go back to the Oberursel engine factory - is today a production plant for engine components . High-tech components for Rolls-Royce engines are manufactured here using the latest manufacturing technologies. The location is also a maintenance and repair center for small gas turbines for military and civil applications.

On RRD Dahlewitz is the development and final assembly of all BR700 engines. As a competence center for twin-shaft engines, Dahlewitz is also responsible for the Tay, Spey and Dart engine series. These engines are used to drive business jets and smaller commercial aircraft . In total, Rolls-Royce Germany looks after over 9,000 engines in service worldwide. Rolls-Royce also operates a test rig for large civil engines and a test center for testing the mechanical behavior of gas turbine components (Mechanical Test Operation Center) in Dahlewitz. A new development test bench for reduction main gears (Power Gearbox) was put into operation in 2017. Main reduction gearboxes will be used in future Rolls-Royce engines with an ultra-high bypass ratio.

Today Rolls-Royce Germany is responsible for the following engines:

At the end of 2005, the Rolls-Royce stake in the V2500 engine of the International Aero Engines joint venture for the Airbus A319 / A320 / A321 family moved from the English Derby to the German subsidiary, where all threads now come together in Dahlewitz near Berlin . The reason for this relocation was to create new capacity for the Trent family to expand. The share consists of the production of the high pressure compressor and the complete assembly.