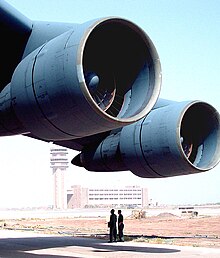 Two TF39 engines on the wing of a C-5 Galaxy

An engine is the entirety of the drive elements of motor- powered vehicles .

The engine includes the engine and (where available) other components necessary for the drive, such as a gearbox or propeller . Depending on the exact definition, cooling and engine cowling can also be understood as belonging to the engine.

In the jargon of car advertisements and trade magazines, a car engine without additional vehicle components is also referred to as a power unit. Furthermore, in railway jargon, the running gear of a steam locomotive including steam engine is referred to as the "engine".

Engines in the form of gas turbines and piston engines are used in civil and military aviation . Their main task is to generate propulsion. In addition, essential aircraft systems such as electrics , hydraulics and pneumatics can be supplied by the power of the engine. Generators that are connected to the drive unit via a transmission are used to generate electricity . Numerous systems such as lighting, instruments, fuel pumps, electric hydraulic pumps, de-icing systems, radio equipment and weather radar are fed from it.

Hydraulic pumps can also be supplied directly from the engine without being dependent on electrical power. Compressed air taken from a compressor stage of a gas turbine - the so-called bleed air - can be used to supply the pneumatic systems in the aircraft, such as the pressure cabin , wing and engine de-icing and air conditioning.