The NSU Prinz was a car model of the German NSU Motorenwerke AG and was built in different versions from 1958 to 1973.

The NSU Motorenwerke, which had only produced motorized two-wheelers after the Second World War , dealt with the development of a light vehicle in the mid-1950s. At first they thought of a three-wheeled vehicle. At the IAA in Frankfurt am Main in September 1957, however, the prototype of the new four-wheeled small car “NSU Prinz” with a self-supporting body and a two-cylinder in-line engine built into the rear was presented to the public.

Production began in March 1958. The Prinz was equipped with an air-cooled parallel twin engine installed transversely in the rear with a compression ratio of 6.8: 1, the 20 HP (15 kW) at 4600 rpm. performed and could accelerate the car up to 105 km / h. In a synchronous parallel twin four-stroke engine, the two pistons move up and down at the same time. A problem with the first engines was the suspension of the engine and the damping to the body, because extreme vibrations were transmitted. These vibrations were brought under control with special silent blocks . The engine had a Dynastart system, i.e. H. a combined starter-alternator from Bosch. A special feature of this parallel twin was the drive of the overhead camshaft via push rods and eccentrics (ULTRAMAX control) as in the single-cylinder engine of the NSU Max .

The prince's equipment was kept particularly simple. It had an unsynchronized claw gear with four forward gears and neither the pivoting triangular windows in the front doors nor reclining seats that were common at the time. For this he had sliding windows in the front doors. In contrast to the models from most other German automobile manufacturers, the vehicle was already equipped with 12 V electrical systems. It was only available in the exterior color light green . This simple version was later called Prince I and cost DM 3739, -.

From February 1959, a Prince II was offered in parallel . In terms of body shape and engine, the additional new model corresponded to the Prinz I, but was better equipped. The new car had a fully synchronized gearbox, a better equipped dashboard, storage pockets in the doors, an ashtray, leatherette applications in the interior and crank instead of sliding windows in the doors. There were four different exterior colors for this model and, at an additional cost, a two-tone paintwork, whitewall tires and a folding roof. Compared to the Prinz I, the car cost DM 340.00 extra.

As a sporty version of the Prinz II, the Prinz 30 was offered from April 1959 , which developed 30 hp (22 kW) with the same displacement but increased compression to 7.6: 1 and a slightly larger carburetor and the small car - with considerable noise - Made a top speed of 118 km / h. From September 1959 there were the versions Prinz IIE and Prinz 30E (for export), which were equipped with the popular triangular opening windows in the doors and reclining seats. The front indicators were no longer on the fenders, but had moved under the main headlights. Similar to the VW Beetle , the “export model” was also available domestically; they were just better equipped versions of the Prinz II / Prinz 30.

In September 1960 the Prinz II was replaced by the Prinz III and in December of the same year the simple model Prinz I was discontinued. With the body shape unchanged, the new car was equipped with a slightly more powerful engine with 23 HP (19 kW) for a top speed of 111 km / h were sufficient. The front indicators under the main headlights, which previously only had the Prinz 30, were now standard on all Prinz III. The front wheels, which were already attached to double wishbones on the predecessors, received an additional stabilizer, and the rear swing axle an additional air cushion. The Prince III initially cost DM 3986, -. By 1962 the price rose to DM 4016, -

The Prinz 30E version was now called the Prinz 30 and its engine remained unchanged, but it also benefited from the modernizations described above. It had a heat exchanger heater and longer spring travel than the normal Prinz III. His purchase price was DM 4154.00. 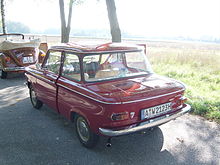 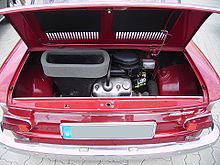 Engine of the NSU Prinz 4 L

Production of the NSU Prinz 4 began in June 1961 . The successor model to Prinzen I, II and III (including the Prinz 30) was shown at the IAA in Frankfurt / Main in September 1961. Compared to its predecessors, it had grown significantly and was given a body in the style of the Chevrolet Corvair .

The chassis and transmission corresponded to those of the Prinz III. Speculations about the first use of the Wankel engine were not fulfilled. The conventional engine now developed 30 HP (22 kW) from 598 cm³. This enabled a top speed of 116 km / h. The Prinz 4 weighed only 570 kg and had a gross vehicle weight of 1000 kg.

From September 1965 the "Prinz 4L" version was added with further improved equipment, which was built almost unchanged until April 1973. There were only minor changes, such as the front sheet metal trim.

In Cairo, Egypt, the NSU Prinz 4 was assembled as Ramses II for the local market by the Egyptian Light Transport Manufacturing Company . In Montevideo it rolled off the assembly line at Nordex SA as the P-1000 .

The Prinz 4 is regarded as the stylistic model of the Soviet SAS-966 "Saporoshez" , which was built from 1966 onwards.

In addition to the Prinz I-III and the Prinz 4, the manufacturer's larger models were initially given the addition of "Prinz":

The K 50 project was planned as the successor to the NSU Prinz . However, through the merger with Audi , it became the Audi 50 .

Overview of NSU car models after 1945